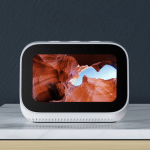 Xiaomi has presented another smart home device that will sell in the European market for €49.99. This is a smart alarm clock Mi Smart Clock, which functionally resembles Lenovo Smart Clock.

The novelty is equipped with a 3.97″ display with a resolution of 800×480 pixels. There are a built-in 1.5 ″ speaker and two microphones that pick up the user’s voice commands. In addition to the alarm function, Mi Smart Clock can be used as a digital frame and a hub for controlling smart devices. The device screen can display images from surveillance cameras and music player control buttons.

Mi Smart Clock supports Chromecast protocol so that you can stream music directly from your smartphone. There are Wi-Fi 4 and Bluetooth 5.0 BLE modules, 1 GB of RAM, and 4 GB of internal memory. The device is only available in white. The release date has not yet been announced.