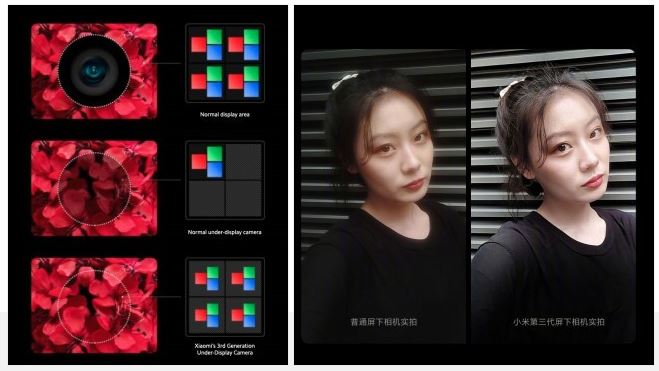 For the past couple of years, smartphone manufacturers have been constantly experimenting with front-facing camera placement. First, there was a fashion for “bangs”, then they decreased to drop-shaped cutouts, and recently, most smartphones use openings in displays for front cameras. However, some companies also make models with pop-up or pan-tilt cameras, such as the ASUS ZenFone 7.

At the same time, everyone is waiting for the first serial smartphone with a sub-screen front camera to appear. Prototypes of such devices have already appeared, but the technology was far from perfect. On September 1, the presentation of the ZTE Axon 20 5G, which will be equipped with a sub-screen camera, should take place.

Xiaomi, meanwhile, has announced that its third generation of sub-screen camera technology is also ready for mass production. The engineers managed to make progress and the photos are of high quality.

The technology includes a new pixel arrangement that allows light to pass through the gaps between the subpixels. The number of pixels themselves has been doubled to match the pixel density of the rest of the display. In the end, the user will not even notice where the camera is located, because the color accuracy and brightness of the area above the camera and the rest of the screen are the same.

This technology will be used in Xiaomi smartphones starting next year. Smartphones of the Mi 11 line should receive it first.