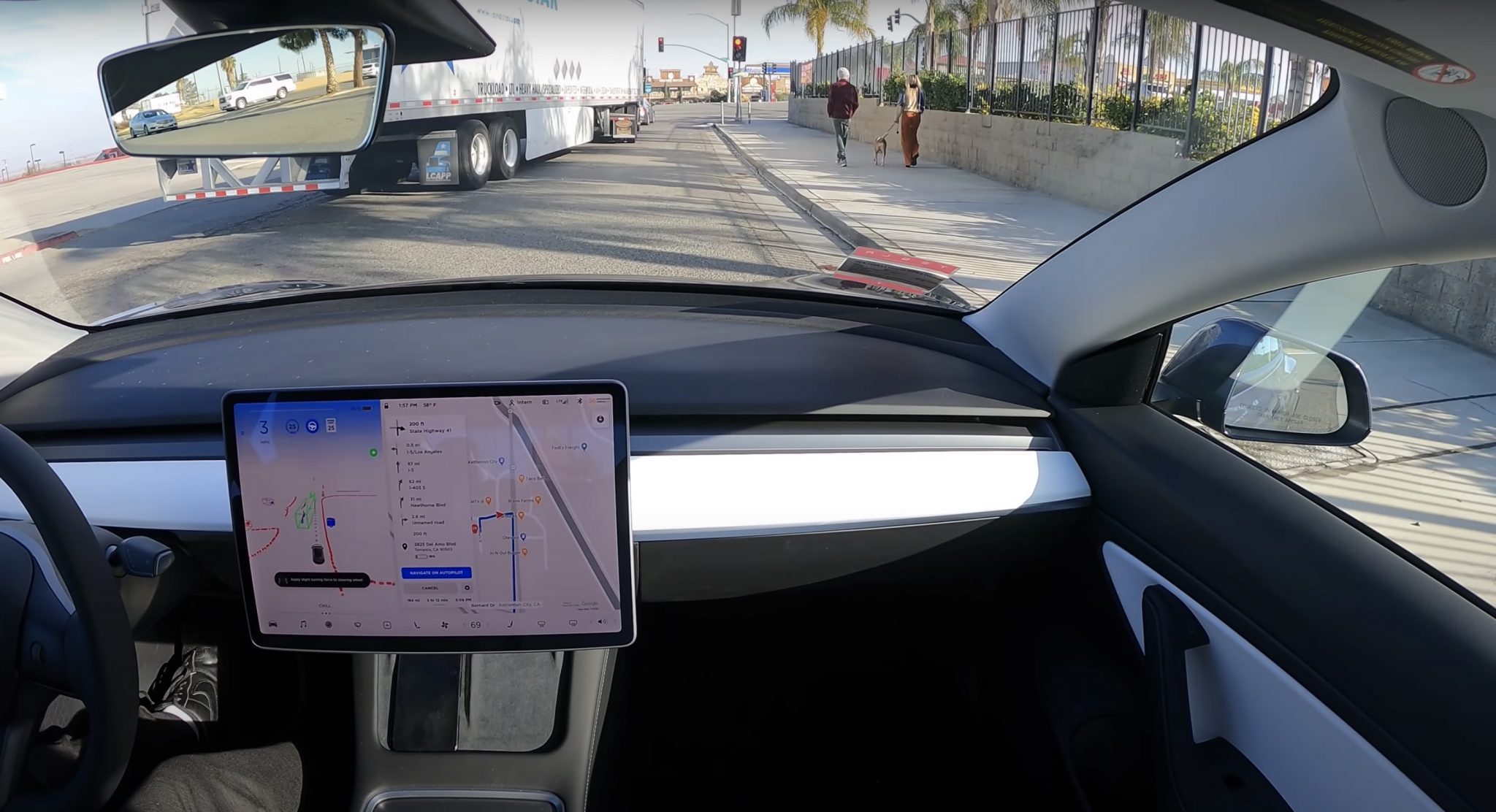 Tesla’s fully functional autopilot (Full Self-Driving Update or FSD for short) is still in beta testing, limited to the United States and a narrow circle of select car owners, but this does not prevent the latter from using it for autonomous (well, almost) travel between cities.

Before that, we have already seen many short videos demonstrating the capabilities of the FSD package, but now a Tesla enthusiast under the nickname Whole Mars Catalog has published a video on his YouTube channel demonstrating how a Model 3 with FSD travels all the way from San Francisco to Los Angeles almost without human intervention – only once during the entire trip the driver intervened and after entering Los Angeles took control to avoid large debris on the road. Perhaps this is the first documented example of using Full Self-Driving without driver intervention to move between cities.

It is important to stipulate that Tesla in the description of the functionality on the site and all materials clearly indicates that its advanced Autopilot assistance system does not provide full autonomy and requires the driver, who is fully responsible for driving the vehicle, to constantly monitoring the situation on the road, without removing his hands from the steering wheel.

The Autopilot hardware, in addition to the FSD computer, which is responsible for processing all the data, includes eight cameras that create a panoramic image around the car (here is a 360-degree video of the trip “through the eyes of the autopilot” of a Tesla electric car), 12 ultrasonic sensors that calculate the distance to an obstacle, and a radar mounted in the bow. Since 2016, all Tesla vehicles, including the junior Model 3, have been equipped with the above components. Earlier, the head of Tesla, Elon Musk, repeatedly said that lidars (3D laser scanners that detect objects and determine their distance) are an expensive and unnecessary technology for autonomous cars. Unlike Waymo and other companies, which rely on lidars and HD mapping, Tesla relies on computer (machine) vision. We talked about this in more detail here. In short: Tesla’s system is easier to scale to a large fleet of vehicles, while a mapping approach that requires constant tracking of the smallest changes is expensive and “non-scalable.”

On the other hand, at the end of December, Ars Technica released a large material, which explains why Waymo’s autopilot approach may ultimately be more reliable than technology Tesla’s.

On October 20, Tesla began beta testing the next major Full Self-Driving (FSD) update, designed to pump the proprietary Autopilot system from the current second to the highest fifth level, thereby providing the company’s cars with the long-promised ability to move independently without any driver assistance. Initially, Elon Musk assumed that the final version’s launch in the United States would take place in mid-December. In early December, the head of Tesla stated that he is “fully confident” about the launch of Tesla’s full autopilot in “certain regions” in 2021. On December 31, answering another question about timing and promises on Twitter, he clarified that Tesla FSD would drive safely and better than the average driver this year. He cannot vouch for the regulators. In other words, Tesla plans to bring the FSD to readiness this year, but the timing of its launch will depend on the regulator.

Tesla Full Self-Driving will work at a safety level well above that of the average driver this year, of that I am confident. Can’t speak for regulators though.

As we have repeatedly noted in previous materials, it is from the introduction of full Full Self-Driving (we are talking about the same package “feature complete» Full Self-Driving, we talked about it in more detail in this article) will depend on the launch of the promised Tesla Network robotic taxi service with 1 million self-driving cars, which the company originally planned to launch in 2020.

According to the initial idea, the Robotaxi service will work with insuring drivers at the first stage. Based on the testing results, Tesla plans to obtain the necessary data to develop a fully autonomous service model and contact the regulator to obtain an appropriate license. Musk has previously said cautiously that he expects to achieve some of the goals in 2021.

Past leaks have indicated that Tesla is developing a processor for the next-generation HW 4.0 platform and is also preparing to move to an exascale-class Dojo supercomputer capable of handling huge visual data streams is growing rapidly with a fleet of cars and teaching cars more efficiently. By the way, to date, the company’s cars with the autopilot on have driven over 3 billion miles on public roads. We also heard that Tesla plans to update the current radar, replacing it with an improved “4D” model twice the detection range. Apparently, this is the very Tesla Autopilot 4D update that Musk talked about last July.

YOU CAN ALSO READ:  YouTube Premium subscribers can now try and test new experimental features before others
0