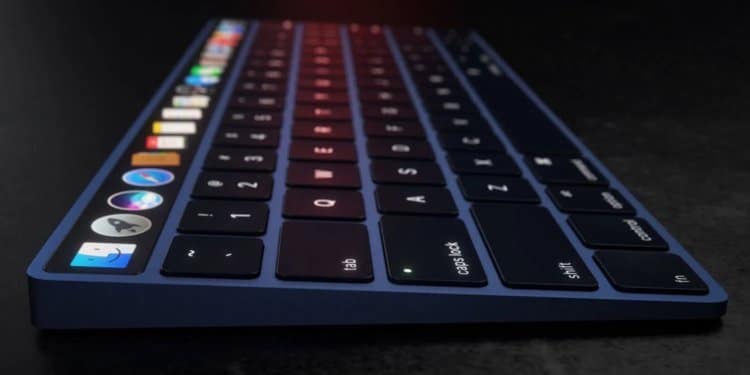 It’s time for Apple to change the Magic Keyboard. What will it be?

Mac design changes are long overdue and inevitable this year. The new should look fresh. In contrast to revolutions in computer platforms, revolutions in the design are made entirely and immediately. Mac peripherals can’t help but change, and they need updating too. For Magic mouse 2, it is a matter of life and death. It’s time to take Magic Keyboard for Mac a step further again. Magic Keyboard and the Magic Trackpad 2 are doing well, they do what they were designed to do, and the Magic Trackpad is still the best in its class. But this is Apple!

There are plenty of ideas for the future of Apple’s keyboards. Reading patent applications and patents on this topic makes the hair stand on end, but we will not re-read it. Apple is clearly not satisfied with something in its today’s keyboards; otherwise, so many employees would not be engaged in their invention with such persistence. But they won’t put the transition to Apple Silicon at risk. There’s hardly anything crazy about the new keyboard (or keyboards). The appearance, if it changes, is not radical. Above, I have called the Mac magic keyboard “Magic Keyboard for Mac” several times – this is true, but not all. The keyboard is also compatible with iPhones and iPads (with iOS 9 or higher), Apple TV (with tvOS 10 or higher), Windows PCs, and even TVs from several companies that have Apple TV Software 7.0 (or higher) installed.

On October 13, 2015, all Apple wireless peripherals (Magic Mouse, Apple Trackpad, and Apple Wireless Keyboard) were removed from replaceable batteries, making them lighter and thinner. Mouse and trackpad added “2” to their labels. Keyboard renamed to Magic Keyboard… A Lightning connector appeared on their cases, and a Lightning to USB cable was included in the package.

Produced and sold (in the Apple online store, for $129) of the only silver color. Compact and lightweight (231g), no numeric keypad. Inside – a single-core 32-bit ARM Cortex-M3 with a clock speed of 72 MHz from ST Microelectronics and BCM20733 from Broadcom.

In 2017, specifically for the iMac Pro, they released the Magic Keyboard with a numeric keypad in Space Gray, weighing 390 g. For three months, Magic Keyboard with a numeric keypad was shipped only with the iMac Pro. Still, the demand for it was so strong that they began to sell it separately, silver and dark gray (Space Gray) colors. It costs $129 for a silver keyboard and $149… The electronics in the 2017 keyboard are the same.

Black Magic Keyboard is more expensive just because of the color.

In 2019, the Magic Keyboard with a numeric keypad for Mac Pro was released in black – the variant comes with the Mac Pro, it is not available for sale. Perhaps on eBay. And in it the same electronics from Magic Keyboard 2015.

The appearance of the keyboard will almost certainly remain the same. Its form is close to ideal. Apple has tried hundreds, if not thousands, of options – its search is still ongoing, a surprise is still possible, but unlikely. The layout of the keys and the labels on them can also be attributed to the appearance. The icons on the function keys change more often than the keyboards themselves. Even on a Mac, they no longer match reality. On iOS, iPadOS, and tvOS, they weren’t right from the start.

YOU CAN ALSO READ:  Perfect Play takes your football training to the next level

The problem could be solved by the Touch Bar, dozens of patents and patent applications from Apple are devoted to this solution, but it is not a fact that the Touch Bar will survive until the end of this year, even where it already exists. “Didn’t take off.” From 2003 to 2015, the keyboards were updated in 2007, 2009, and 2011. The icons on the function keys appeared only in 2007, and it was not difficult to bring them in line with the functions of the keys. There is only one way to get the icons on the functional to indicate the action when pressed. Store icons in the memory of a device or computer and display them on keys by their settings.

Apple had keyboard concepts with Touch Bar, by the way.

Does a standalone keyboard need a Touch ID button or a Face ID camera? According to rumors, Apple will abandon the Touch Bar in MacBook Pro this year, so who will allow Touch ID to appear on stand-alone keyboards?

How will Magic Keyboard 2 be charged?

Until Lightning is phased out on the iPhone and is likely to continue in 2021 and 2022, the current charging method may remain unchanged. We’ll talk about Magic Mouse 2 and its problems some other time, and in the case of Magic Trackpad 2 and Magic Keyboard. Moreover, the new Lightning cables are more durable and attractive.

USB? I don’t see the point in that. Apple patents suggest exotic ways to charge peripherals — for example. A charger “mat” can be built into the base of an iMac stand or display. Once you’re done, the mouse or trackpad needs to be placed on the base. Keyboards were not considered in that patent. I guess there is no need to explain why. And regular keyboard charging mats are not suitable.

YOU CAN ALSO READ:  YouTube for Android TV gets 8K video support

Charging by air might work – Apple also has many patents and patent applications on this topic. There are specialists, but somehow too fantastic and too complicated for the keyboard’s tiny brain. To charge at a distance, Apple will have to strain its computational abilities. You can also read: iPhone 12 appears to support reverse charging. Looking forward to AirPods with MagSafe?

By the way, about the brains. In 2015, Apple did not yet have its own chip for working with Bluetooth – they had already worked on it. But it appeared in AirPods and some Beats headphones (Apple W1) only a year later. Apple W2 is included in the Apple S3 assembly (in Apple Watch Series 3), supporting Bluetooth 4.2, eliminating the disadvantages of this communication method. Apple W3 supports Bluetooth 5.0. Used in Apple Watch Series 4, Series 5, Series 6, and SE.

In assemblies of the new Apple Watch – an economical 2-core 64-bit processor, of course, of its own design. Apple has enough workforce, resources, and expertise to develop an innovative, cost-effective chip for intelligent Mac peripherals. Does a keyboard need a mind? In the section on the new keyboard’s appearance, I did not mention True Tone support in each of its keys. The reason would make it real. The necessary pictograms could be chosen by themselves. Automatic switching on and off the backlight, much more; the keyboard is a complex technical device.