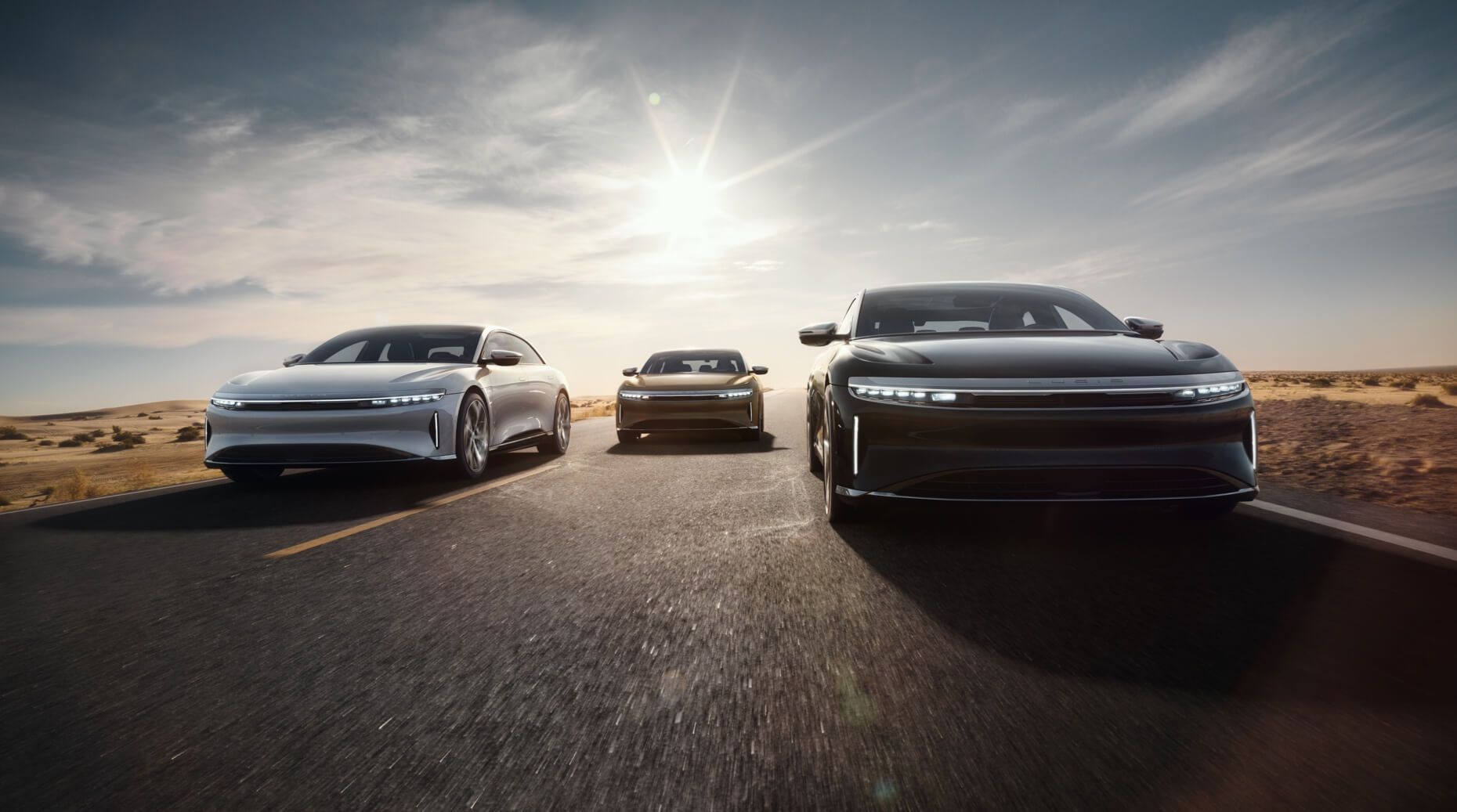 The premium electric car Lucid Air is officially presented: the power is up to 1000 hp, the range is up to 800 km and the price tag is from $ 80 thousand.

As promised, startup Lucid Motors unveiled its first production electric vehicle tonight, the Lucid Air premium sedan. Thanks to numerous teasers and leaks, interested readers already know almost everything about this model, so the announcement itself was interesting with confirmation of the previously announced characteristics and photographs of the final design of the model.

The creation of an electric car was carried out from scratch, without looking at internal combustion engines, so its design takes full advantage of the electrical circuit. The developers have called the concept of the cabin layout Lucid Space Concept, based on the miniaturization of engines, transmission and battery in order to increase the free space of the cabin. The manufacturer’s advanced electric platform, called the Lucid Electric Advanced Platform (LEAP), uses a pair of electric motors, permanent four-wheel drive and a 113 kWh battery.

The Lucid Air electric car will be available in four versions:

YOU CAN ALSO READ:  Volkswagen plans to sell 500,000 ID.4 electric crossovers a year

In the maximum version (Air Dream Edition), an electric car with a capacity of 1080 hp. accelerates to 100 km / h in 2.5 seconds, travels a quarter mile in 9.9 seconds and picks up a maximum of 270 km / h (apparently this is an artificial limitation of road versions, since the prototypes of the model accelerated to 378 km / h, which is not surprising taking into account power and drag coefficient of 0.21). But the maximum range is shown by the Air Grand Touring version – it is able to overcome 832 km (517 miles) from a single charge according to the EPA measuring cycle. The Lucid Air electric car supports high-speed charging at up to 300 kW, in this mode it gets 480 km (300 miles) of range in just 20 minutes of charging or 32 km (20 miles) per minute of charging. In home / office conditions, you can charge from a household network with a power of up to 19.2 kW.

YOU CAN ALSO READ:  Elon Musk: the next "killer product" Tesla will be Solar Roof

The technical characteristics of all versions of Lucid Air are summarized in the following tables:

Interestingly, the company has not yet announced the characteristics of the youngest model Lucid Air, so we do not know what compromises the developers are willing to make in order to reduce the cost of this version (one engine, a battery of lower capacity?).

The interior design of the Lucid Air is even more impressive than the exterior of the electric vehicle. Under the right hand of the driver is a retractable touchpad for controlling the parameters of the electric vehicle, and in front of it is a huge curved 34-inch 5K-display of complex shape Glass Cockpit. The touch interface is complemented by multiple physical controls and Amazon’s Alexa voice assistant.

The driver gets at his disposal a proprietary ADAS (advanced driver-assistance system) assistance system, which is called Lucid DreamDrive – it is based on 32 different sensors (cameras, radars, ultrasonic sensors, lidars, etc.) and is capable of autonomous movement Level 2 / Level 3. The software is updated wirelessly via OTA (Over-the-Air).

YOU CAN ALSO READ:  Sony announced the Xperia 8 Lite smartphone is a copy of the 2019 Xperia 10 with a new main camera

Each version of the Lucid Air will receive its own list of options, while buyers can personalize the electric car to their own taste using configurator… 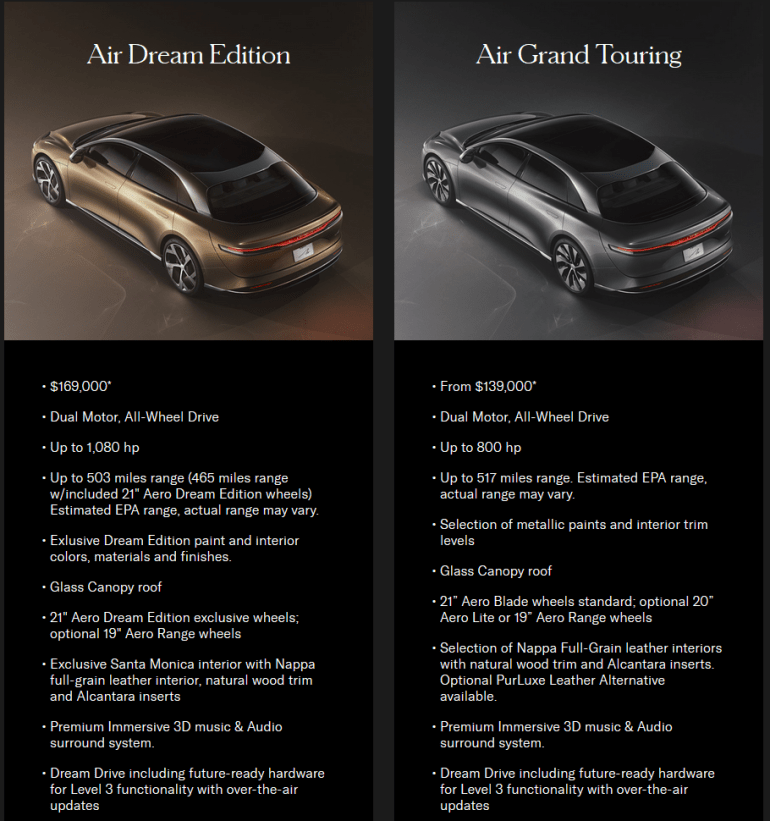 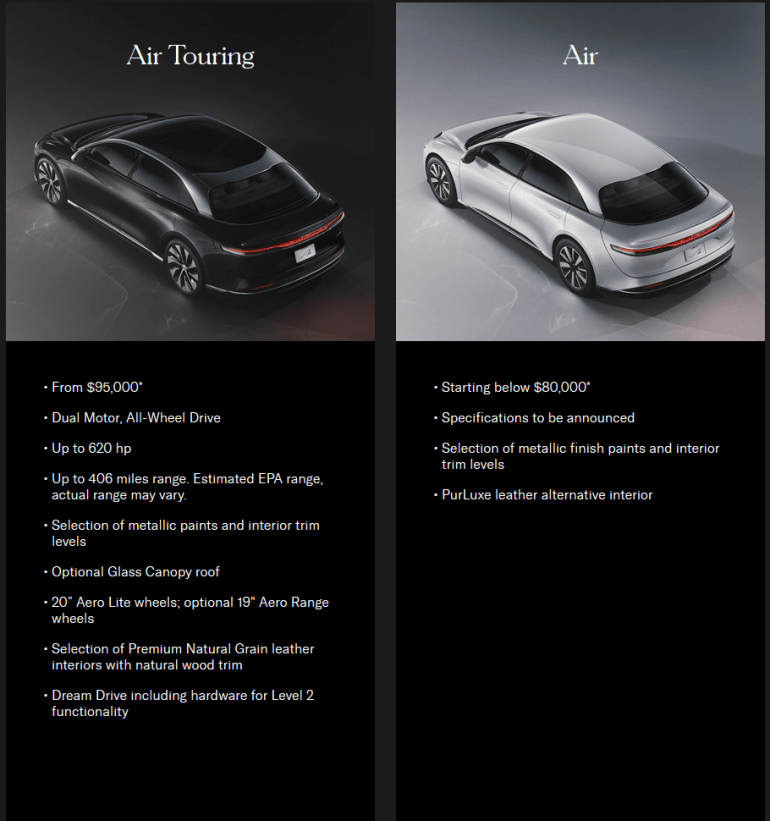 Lucid Air’s premium electric vehicle is already open to customers in the US and Canada, as well as select countries in Europe and Asia. For the regular version of Air, it is enough to make a deposit of $ 1,000, for the limited Air Dream Edition – $ 7,500. By 2021, the company plans to open about 20 showrooms and service centers in North America. Electric vehicle production will begin in the coming months at Lucid Motors’ own factory in Casa Grande, Arizona, USA.