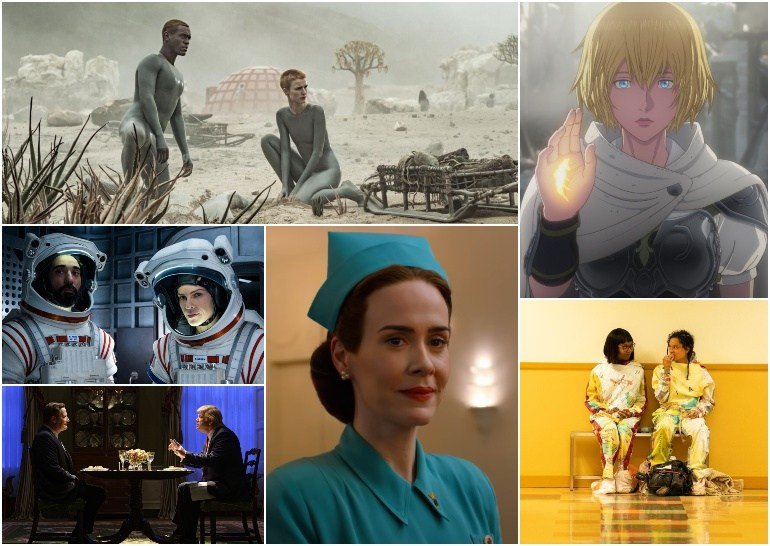 The most interesting series of September 2020

The COVID-19 pandemic has made significant adjustments to the plans for the release of films and TV series in 2020. And despite the fact that the owners of streaming services have benefited from the quarantine and forced self-isolation of viewers, the production process of new series has also suffered. Some of the shows, which were initially extended for a second season, were cancelled, and the start of work on others was pushed back. Nevertheless, by the fall, all platforms came up with a good line of new series, the most interesting of them, which will be released in September, we will tell below.

Raised by Wolves / “Raised by wolves”

Two androids, Father and Mother, try to raise a group of human children on a distant planet after the Earth was destroyed by war. This, of course, turns out to be very difficult. Raised by Wolves is interesting not only for its visuals and plot but also for the figure of an exclusive producer, who was the grandmaster of science fiction Sir Ridley Scott.

Swedish Netflix series about the first case of the young police inspector Kurt Wallander. The popular series of novels about Inspector Wallander was created by writer Henning Mankel. The first book was published back in 1990, while the action of the Netflix series was transferred to modern Sweden.

YOU CAN ALSO READ:  The first teaser trailer of the fantastic action movie Monster Hunter has been released: the premiere was postponed to December 2020

Another space fiction, this time close-range. Away tells the story of an American astronaut who goes to Mars as part of an international expedition, leaving her husband and teenage daughter on Earth. American actress Hilary Swank, winner of two Oscars, two Golden Globes for films, starred as Commander Emma Green Boys don’t Cry and Million Dollar Baby…

The fantastic series Noughts + Crosses is based on the eponymous series of youth novels by writer Malorie Blackman, which tells about an alternative Earth, where Europe was conquered by more civilized African nations, and whites became slaves and second-class people. The series, which takes place in London, was filmed in South Africa.

Van der Valk is a remake of the classic British detective series that aired on ITV in 1972-92. and based on a series of novels by Nicholas Freeling. The series takes place in Amsterdam, and the main role in the new adaptation was played by actor Mark Warren, who may be known to you for his roles in the series Band of Brothers, Hustle, The Vice, State of Play, Mad Dogs and The Musketeers.

YOU CAN ALSO READ:  Review of the animated film: Over the Moon

Detective-mystical mini-series starring Jude Law and Naomi Harris. The events of the series take place on a small island near the British coast, where the main characters are drawn by some mysterious force. The Third Day consists of three related parts with different characters. Moreover, in the first (Summer) and last (Winter) parts there are three episodes, and between them there is a mysterious special episode and a separate part of Autumn.

HBO’s teenage drama about growing up We Are Who We Are is interesting primarily in the name of the showrunner, screenwriter and director. It was the Italian Luca Guadagnino, the author of such notable paintings as Call Me by Your Name / “Call me by your name” and Suspiria / “Suspiria”. The series takes place at an American base near Venice, where 14-year-old Fraser Wilson and Kathleen Harper get together with their military parents.

An anime adaptation of Capcom’s open-world action / RPG of the same name, which was released on PlayStation 3 and Xbox 360 in March 2012, and later re-released on Windows, PlayStation 4, Xbox One and Switch. Like the original game, the anime tells the story of a hero looking for his heart, kidnapped by a powerful dragon.

YOU CAN ALSO READ:  Review of the political series: The Comey Rule

The series Ratched will tell the backstory of one of the main characters of the novel by Ken Kesey and the film based on it One Flew Over the Cuckoo’s Nest / “One Flew Over the Cuckoo’s Nest” – the story of Sister Ratched. The series will show how an ordinary nurse will turn into the monster that we know from the book and the film. The title role stars Emmy and Golden Globe winner Sarah Paulson. Netflix immediately ordered two seasons of the show with 9 episodes each.

The American remake of the famous British TV series, which tells about a comic book, all the events of which are embodied in reality. The showrunner of the adaptation was the writer Gillian Flynn, the author of the novels that formed the basis of the film. Gone Girl / “Gone Girl” and the series Sharp Objects / “Sharp Objects”.

The Comey Rule series is based on the autobiographical book of former FBI Director James Comey. The Ultimate Degree of Loyalty follows the 2016 US election and Comey’s relationship with President Donald Trump, whom the former FBI man describes as an unscrupulous man with ties to the Kremlin. Donald Trump is played by Brendan Gleeson, James Comey is played by Jeff Daniels. The series will be released ahead of the 2020 presidential election.