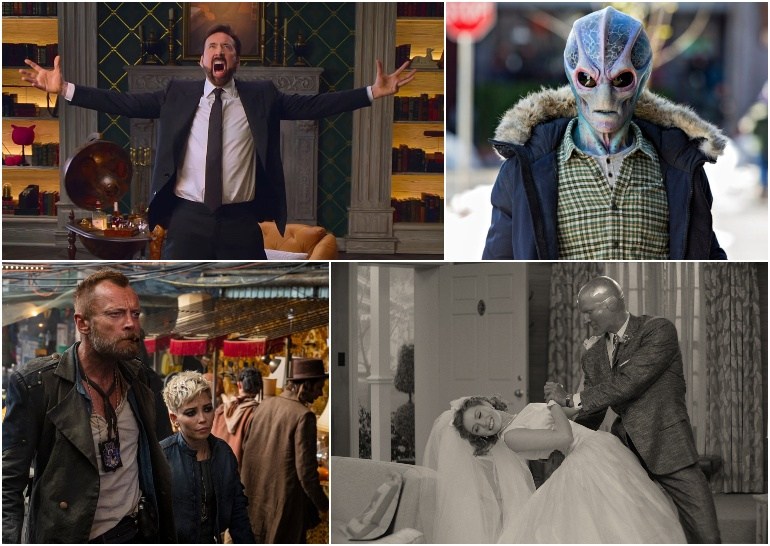 Following the capture of Charles Sobhraj, the BBC One miniseries, one of the most famous serial killers of the 1970s, operating in Southeast Asia. The role of “The Snake,” which received such a nickname for the fact that he persecuted his victims, starred French actor Tahar Rahim, and his girlfriend, Canadian Marie-André Leclerc, was played by the dearest Jenna Coleman (Clara Oswald from Doctor Who and Queen Victoria from Victoria) …

The American remake of a British sitcom Miranda starring comedian Miranda Hart. In the Fox version, Miranda became Kat. This 39-year-old woman, who did not live up to her mother’s expectations, is played by actress Mayim Bialik, who is probably known to you from the role of neuroscientist Amy Farrah Fowler on the sitcom The big bang theory…

The Police procedural is a sub-series of satirical fantasy novels about the Ankh-Morpork City Guard, set in Terry Pratchett’s Discworld. True, the upcoming series seems to have little in common with the source, the world of books has been made more modern and, in general, the series looks more like a fantasy version of some CSI: Miami than as an absurd satire, as it was in the books. In short, Pratchett’s fans are already unhappy, while ordinary viewers, it seems, will see a variation on the theme of the movie Bright in The Watch.

YOU CAN ALSO READ:  Netflix Closes Fictional Series Altered Carbon After Two Seasons Due to Budget and View Mismatch

Fantastic series about a family with many adopted children who have sheltered the shipwrecked aliens. Includes strange alien creatures and monsters, funny technology, and evil scientists trying to capture aliens—typical children’s fantasy.

A documentary series about the history, etymology, influence on culture, and other aspects of obscene words in our speech, with the incredibly charismatic Nicholas Cage in the role of the presenter of late. Watching History of Swear Words is, of course, only in English.

Crime drama Coyote follows a retired US Border Guard agent who is forced to collaborate with Mexican organized crime to save his own family. Retired agent Ben Clemens was played by actor Michael Chiklis, best known for his police series role. The shield which earned him an Emmy and a Golden Globe.

French crime drama about a modern criminal and adventurer inspired by the novels of Arsene Lupine. The main character’s goal is to avenge his father, 25 years ago, accused of a crime he did not commit.

In connection with the postponement of most of the major movie premieres of 2020 to 2021, the start of the fourth phase of the Marvel Cinematic Universe fell on the WandaVision series. The story of Wanda and Vision’s family life in different time eras looks completely eclectic and insane if you do not remember exactly what abilities the Scarlet Witch has and that the events of the series take place after the end of Avengers: Endgame.

YOU CAN ALSO READ:  All Warner Bros. in 2021 will take place simultaneously in cinemas and on the HBO Max platform

Relaunch of the legendary Walker cop series, Texas Ranger starring Chuck Norris. Judging by the trailer and the fact that Walker will be played in 2021 by Jared Padalecki, who starred in 15 seasons of Supernatural, the cool Texas Ranger’s revamped story will have more drama and less kick-wagging. It’s a pity.

Fate: The Winx Saga is a live-action TV adaptation of the Winx Club series aimed at the original cartoon’s grown-up audience. In keeping with the widening age range, the new version is darker and more serious. The plot is still devoted to the story of girls who have magical powers and can turn into warriors-fairies. Bloom is played by the young actress Abigail Cowan, who has appeared in the series Chilling Adventures of Sabrina and Stranger Things.

The fantastic series Resident Alien is based on the comic strip of the same name by Peter Hogan and Steve Parkhouse and tells the story of an alien forced to hide from government agents in the American outback. After a stranger disguised as a doctor is invited to participate in a murder investigation, everything becomes much more complicated and fun. The alien’s role in the series was played by actor Alan Tudik, who feels very comfortable in fantasy stories.

Cobra Kai – January 1, 2021 (Season 3, Netflix)
After the second season, the series about matured karate children from the cult 80s movie The Karate Kid moved from YouTube Premium to Netflix. Moreover, even before the release of the third season, which was moved to an earlier date, it was extended to the fourth.

The Rookie – January 3, 2021 (Season 3, ABC)
Nathan Fillion’s character in his 40s continues to master the role of a “young” police officer in Los Angeles.

Zoey’s Extraordinary Playlist – January 5, 2021 (Season 2, NBC)
Continuation of the story of a girl with a very unusual superpower. She knows how to hear others’ thoughts, but only in the form of songs and musical numbers.

Marvel Studios: Legends – January 8, 2021 (Disney +)
In anticipation of the fourth phase of the Marvel Cinematic Universe, we will be reminded of the stories of individual characters in the universe and how the events of different MCU films and TV series related to each other. The first two episodes will focus on Wanda and Vision.

American Gods – January 10, 2021 (Season 3, Starz)
Although the second season of “American Gods” was greeted by the public and critics with coolness, it is still interesting to know how the confrontation between new and old gods will end.

All Creatures Great and Small – January 10, 2021 (US release, PBS)
A screen adaptation of the book of stories about animals “About all creatures – large and small” by the English writer and veterinarian James Harriott.

Snowpiercer – January 25, 2021 (Season 2, TNT)
Continuing the story about people living in a giant train speeding along an endless railroad around the frozen Earth.