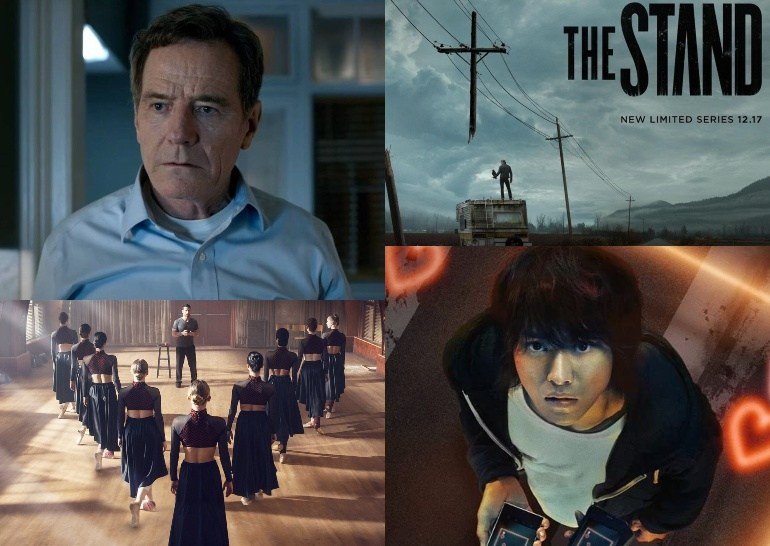 The most interesting new series of December 2020

As we noted earlier, most of the TV premieres occur either in the spring or in the first months of the fall season, in September or October. In November and December there are fewer new products, although some of them are interesting. For example, a new series based on King or the return to the screens of a popular actor disappeared from the radar for a while. So, what’s interesting for us this December?

Showtime crime series based on the Israeli show Kvodo. Your Honor tells the story of a respected judge who undertakes to cover up his own son, who knocked down a man and left him for dead. The role of judge Michael Desiato is played by Brian Cranston, who is well known to you from the TV series Breaking Bad. British playwright Peter Moffat adapted the script.

Biographical series dedicated to the life and career of the most successful Latin American singer in history, Queen of Tejano, Madonna of Tejano Music – Selena Quintanilla-Perez, whose death in 1995 has been compared in terms of influence on the United States with the deaths of John Lennon, Elvis Presley and John Kennedy. Selena: The Series is based on the singer’s authorized biography and was produced by her father. The role of Selena is played by actress Christian Serratos (The Walking Dead, Twilight series).

YOU CAN ALSO READ:  Jared Leto's Joker will appear in the director's cut of Justice League by Zach Snyder (this character was not in the theatrical version at all)

An animated series about three children and their neighbor, a wise panda named Stillwater, who will help them understand the world around them and solve their problems. Gaumont Animation and Scholastic Media produced the series.

New, already the fourth in a row, the adaptation of the series of teenage detective stories “The Brothers Hardy,” published since 1927 and already numbering more than 400 works. The well-known and equally long series of detective stories for girls, “Nancy Drew” appeared in due time as a female alternative to “The Hardy Brothers.” TV series based on books came out in the 50s, late 60s, 70s, and 90s—last century. Let’s see how the new adaptation turns out.

A game adaptation of the same name, based on which a full-length anime was already filmed in 2014. This is the story of three teenagers who are dissatisfied with their lives in Tokyo, who find themselves in a parallel surreal world in which they must take part in a dangerous game, the stake in which is their life.

YOU CAN ALSO READ:  Review of the documentary series Challenger: The Final Flight

New Amazon Prime series about a group of teenage girls trapped on a desert island after a plane crash. Apparently, we are waiting for a cross between “Lord of the Flies” and the classic Lost, emphasizing youthful maximalism and the problems of adolescence.

A screen adaptation of the novel of the same name by Sona Charayipotra and Dhoniel Clayton (a sequel, “Shiny Broken Pieces” has already been released), which tells about a private elite ballet school and the strange and dangerous things that happen within its walls.

Post-apocalyptic TV series with biblical parallels based on the novel of the same name by Stephen King. A new strain of flu destroys 99% of humanity. The rest gather around two leaders – the Black Man, who is considered the Devil’s messenger, and Mother Abigail, a black woman of one hundred and eight years old, doing the will of God. The black man was played by Alexander Skarsgard, Mother Abigail by Whoopi Goldberg.

YOU CAN ALSO READ:  The first trailer for the science fiction film: Chaos Walking with Tom Holland and Daisy Ridley (premiere January 22, 2021)

An expensive costume series about Great Britain during the Regency (1811-1820). Bridgerton is an adaptation of the book series of the same name (currently nine novels) by writer Julia Queen. At the center of the story are the eight Bridgerton brothers and sisters who begin their lives in English high society. A feature of this film adaptation is many black actors playing the roles of English aristocrats. The narrator is voiced by Oscar-winning actress and singer Julie Andrews.

Pennyworth – December 13, 2020 (Season 2, Epix)
A spin-off of a story about Batman, telling about the youth of his faithful assistant, legendary butler Alfred Pennyworth, and his work with billionaire Thomas Wayne, Batman’s father.

The Expanse – December 16, 2020 (Season 5, Prime Video)
The space series’s penultimate season is based on the series of novels “Space” by James Corey. While Jim Holden and his team’s story is still incomplete in the books, Amazon has announced that The Expanse will be closed after season six.