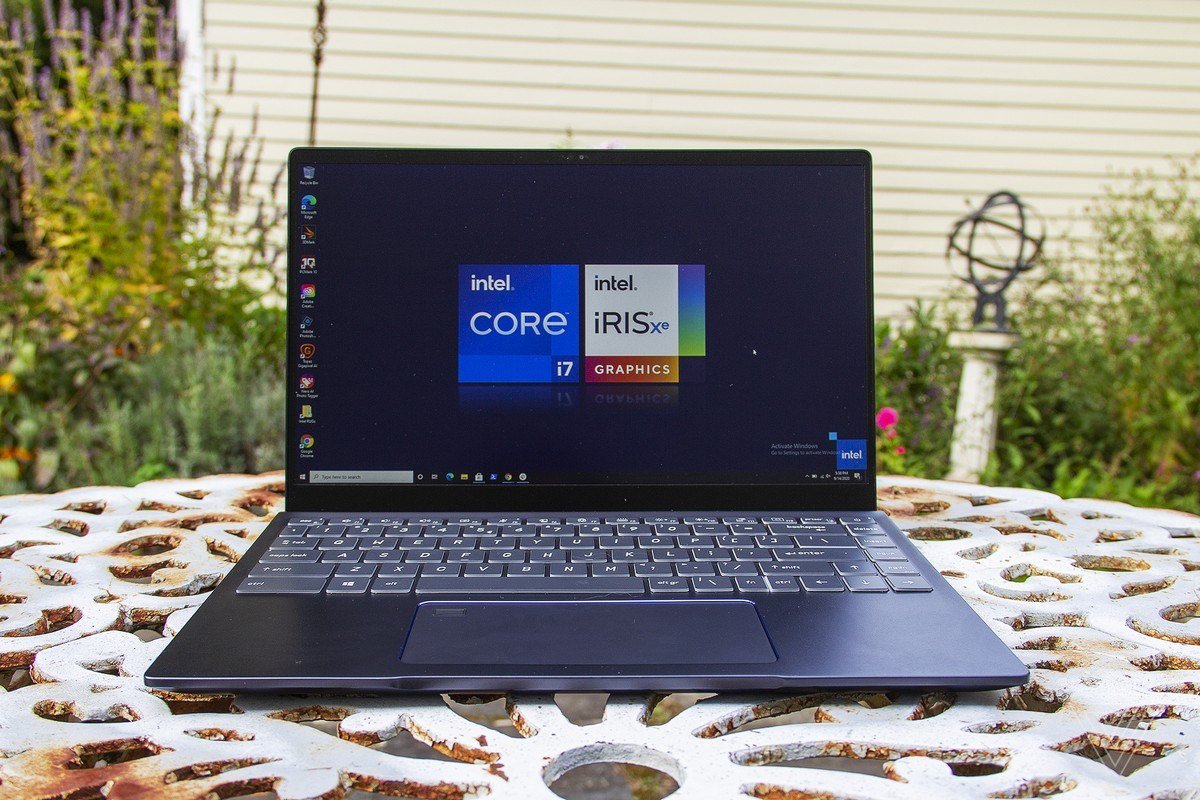 The first full tests of the top mobile CPU Core i7-1185G7 (Tiger Lake) with Iris Xe graphics. It looks like Intel did it

The first full reviews of laptops based on the latest 11th Gen Core processors (Tiger Lake-U) have surfaced online. Various publications and bloggers received reference laptops with the top-end Core i7-1185G7 (production models have not yet been released). 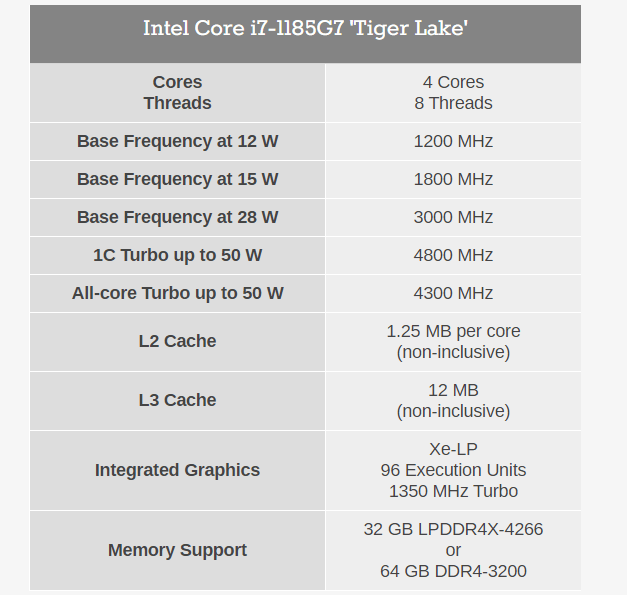 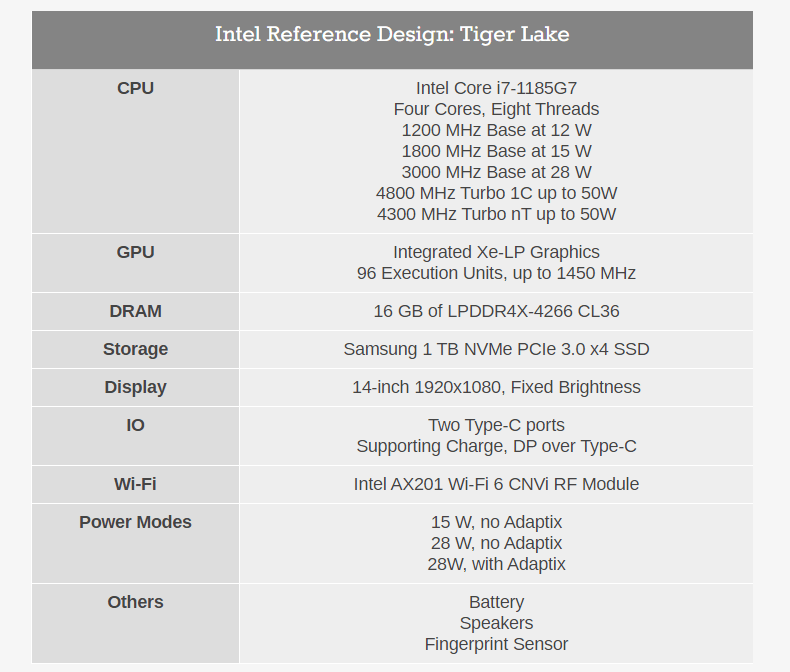 The flagship Core i7-1185G7 has four cores with Hyper-Threading, 12MB of L3 cache and clocks at 3.0 to 4.8 GHz. Also included in the CPU configuration is an integrated GPU Xe with 96 compute units. 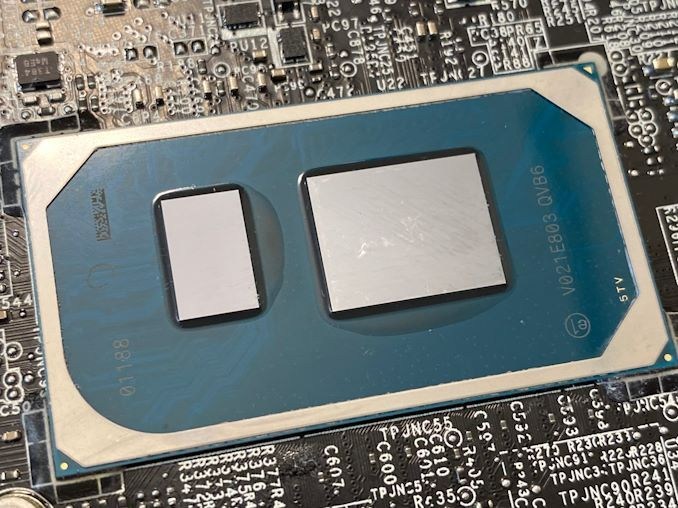 Full reviews of Western sites can be found at the links at the end of the post. We will give some graphs for clarity and outline the main points.

In short, Intel seems to have succeeded – the new generation turned out to be quite decent, providing a significant performance increase (both in terms of CPU and GPU) compared to the 10th generation Core (Ice Lake). Below are comparative diagrams with test results in synthetics, AI tasks, image processing and video decoding, common applications and games.

Also, the Iris Xe GPU in 28W mode demonstrates twice the performance compared to its successor in Ice Lake and outperforms Vega 8 in Ryzen 7 4800U by an average of 20-40% depending on the game. The video-core allows you to play Overwatch at maximum settings of 1080p with an average frame rate of 89 fps, while the 4800U produced only 46 fps at Ultra settings, and the 1065G7 at minimum settings no more than 65 fps. And that’s bad news for NVIDIA. Entry-level discrete graphics like the MX350 don’t seem to make much sense anymore.

Another strong point of Tiger Lake-U is its improved video encoding/decoding unit. A 5.5-minute 4K clip in Premiere Pro took eight minutes to complete, while the Surface Laptop 3 and XPS 13 2-in-1 based on the 1065G7 took over 15 minutes. The test on a 4800U with the same parameters failed due to compatibility issues with Premiere Pro, but the Dell G5 15 SE with a faster 8-core 45W Ryzen 7 4800H and Radeon RX 5600M ran just 24 seconds faster.

The 11th generation (Tiger Lake-H) 8-core Core models will not be released until next year, so, for now, Intel has nothing to oppose the high-performance Renoir-H. And by the time Tiger Lake-H is released, AMD will most likely already have Ryzen 5000H (Cezanne) on the new Zen 3 architecture, but with the old Vega (GCN) graphics. At the same time, it is the Iris Xe graphics on the Xe-LP architecture that are the most impressive feature of the Tiger Lake family of processors. It has the potential to be a game-changer, which is quite ironic considering AMD’s longstanding leadership in integrated graphics. Initial tests give the impression that the Iris Xe can handle some of the most demanding games and even the latest major AAA projects.

It is important to emphasize that the difference in performance between the Core i7-1185G7 with TDP 15 and 28 W is quite significant and that the models with the 15 W version will be the majority, given the positioning of the Tiger Lake-U line. This will need to be taken into account when choosing a laptop on the new Tiger Lake platform. Another unresolved issue is autonomy. Intel promised a significant increase over Ice Lake and the first results are encouraging (13% increase in energy efficiency), but for the final conclusions, it is still necessary to wait for the release of production Tiger Lake-based laptops. To date, several have already been announced, including the Samsung Galaxy Book Flex 5G, Acer Swift 5 and ASUS Zenbook S. They should go on sale by the end of the year.