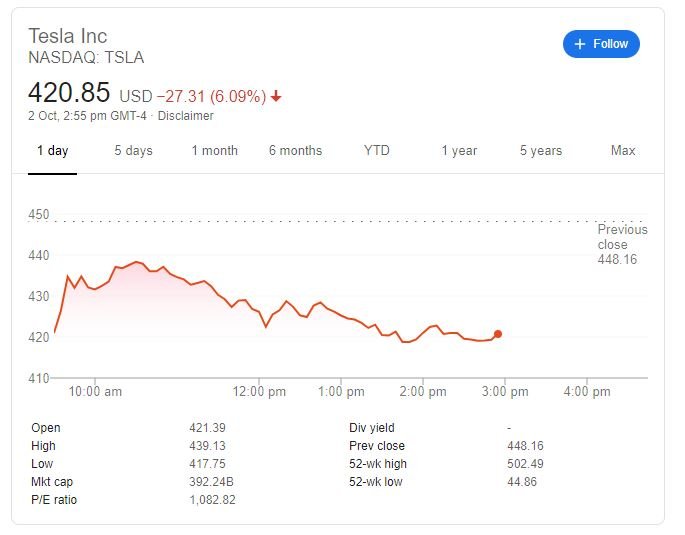 Tesla shares plunged a record 21% last month and entered a downtrend. Then, in our news, we assumed that the change from a downtrend to an uptrend was only a matter of time, and not so distant – and we were right. Over the past couple of days, Tesla shares have risen significantly in anticipation of a new record for quarterly shipments.

Fresh insider data indicates that Tesla delivered a record number of cars to customers in the last week of September and reached a new all-time record in the third quarter of 2020. A week earlier, a copy of an internal letter was leaked to the network thanking Tesla CEO Elon Musk to the company’s employees for their excellent work in ensuring delivery targets. Even earlier, when addressing employees, the head of Tesla said that for a record, you need to ship as many cars per day as the company has not been able to do before. Thus, all indications are that Tesla has managed to update the supply record.

Wall Street analysts estimate the volume of deliveries of Tesla cars for the last quarter at 140 thousand cars, whereas a couple of weeks ago their forecast was significantly lower – 123 thousand. And this despite the fact that the last few quarters Tesla has consistently exceeded analysts’ expectations in terms of supply. For example, in the second quarter of 2020, the company was able to deliver 90,650 cars to customers, while Wall Street analysts predicted only 72,000 pieces.

By the end of this year, Tesla plans to ship 500 thousand cars (in 2019, the result was 367,500 cars) and for the first time make a profit for the whole year (the company has been making a steady profit in the last four quarters). Elon Musk recently cautiously suggestedthat by 2030 Tesla will reach sales of 20 million cars.