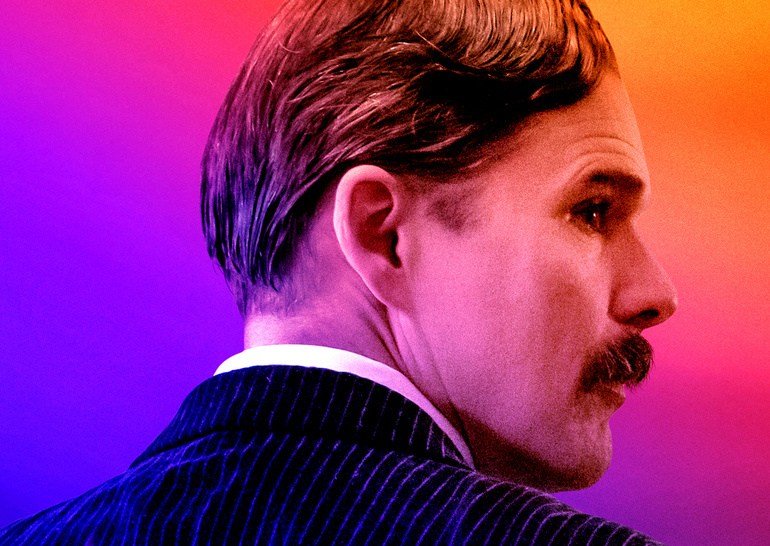 Tesla is a romanticized version of Nikola Tesla’s biography, told in a very unusual manner and looks more like an avant-garde theatrical production than a feature film.

However, knowing the previous work of director Michael Almereyd, it is not hard to guess what this film will be like. Almereida has devoted his entire life to independent cinema, and he wrote the script for the film about Nikola Tesla back in 1980, when he left Harvard after three years of study and moved to Hollywood. It took 40 years for this picture to become a reality.

The story told in Tesla is, in principle, well known to those interested in technology. Moreover, more recently, she also formed the basis of an unlucky film. The Current War / “War of currents” with Benedict Cumberbatch and Nicholas Hoult in the lead roles. The Current War, which was scheduled to premiere on December 22, 2017, was postponed due to the sex scandal surrounding Harvey Weinstein, co-owner of The Weinstein Company, which rented the film. As a result, the film hit the screens only in October 2019, after the bankruptcy of The Weinstein Company and the resale of the rights, it received low press ratings and failed miserably at the box office. But back to Tesla / Tesla Michael Almereid.

YOU CAN ALSO READ:  Review of the series: Ratched

Yes, the main events of this tape again relate to the “War of currents”, the famous confrontation between Nikola Tesla and Thomas Alva Edison, marked by a very dirty struggle of competitors and mutual dislike of inventors for each other, which remained with both for life. But in his work, Almereida actually wants to show not the known events and facts from Tesla’s biography, but the scientist’s alienation from the whole world, his intertemporal and otherworldly state. Hence the objects that “break through” at the end of the 19th century from the beginning of the 21st, a little theatrical scenery and frankly drawn backdrops that separate Tesla from other people, leaving him alone on the stage.

The narrator of the story of Nikola Tesla in the film is En Morgan, the youngest daughter of that same J.P. Morgan (yes, yes, JPMorgan Chase is him). And although young An was most likely familiar with Tesla, her father invested in the inventor, the girl’s love shown by Almereid is not confirmed by any sources, moreover, En Morgan, most likely, was more interested in women. This, however, did not stop the actress Eve Hewson from playing a very interesting character who goes through different stages of a relationship with an ingenious inventor who repels women.

YOU CAN ALSO READ:  The first teaser trailer for the movie "Batman" / The Batman starring Robert Pattinson

En Morgan appears in the film as an object-bound but now independent bibliographer who observes Tesla from the 21st century. Therefore, En calmly uses a computer, a projector, googles Tesla, his competitors and investors on the Web, etc. All these inventions would have been impossible without Tesla. And in the image of En Morgan there are clear features of Katherine Johnson, the only woman, besides his mother, to whom Tesla was probably attached. Some of the phrases spoken in the film by An Morgan are actually attributed to Katharine Johnson.

Another interesting woman who appears in the film alongside Tesla is the legendary actress Sarah Bernhardt. And yes, in this case we can say the same thing as in the paragraph above, Tesla and Bernard were definitely familiar, but there is no confirmation of the connection between them. However, knowing the reputation of Sarah Bernhardt …

Ethan Hawke is one of Michael Almereida’s most loyal actors. He starred in three films directed by the director, among which Almereid’s most famous work is Hamlet 2000 and another modern adaptation of Shakespeare – Cymbeline… The actor is clearly very comfortable in the theatrical scenery of the slightly absurd worlds that the director is building. Considering Hawke has repeatedly declared his love for the stage, this is hardly surprising. In any case, we liked Ethan Hawke’s Tesla much more than Nicholas Hoult’s Tesla in The Current War. A little lost, immersed in his thoughts, a genius, whom the world around him only hinders.

YOU CAN ALSO READ:  The official trailer for the second season of The Mandalorian has been released

Tesla / “Tesla” is a very unusual film that not everyone will like. Nikola Tesla and Thomas Alva Edison have an ice-cream battle here, Niagara Falls displays a banner with a printed picture, the narrative is sometimes interrupted by a slideshow with off-screen commentary, and Edison pulls a smartphone out of his jacket pocket at the most unexpected moment. But all this, including Tesla’s final performance of the hit of the rock band Tears for Fears – Everybody Wants To Rule The World, is subordinated to one goal, to show the ingenious inventor as a person ahead of his time and living out of time. This approach to biographical drama will alienate someone, but to us it seemed worthy of attention.

Pros: Interesting approach to biographical cinema; an attempt to show the alienation and timelessness of genius; very good acting work of Ethan Hawke and Eve Hewson; costumes and decorations

Minuses: Some eclecticism of the film; the main events shown in the picture are already well known to the audience; a number of assumptions, especially concerning Tesla’s personal life

Output: An unusual attempt to show Nikola Tesla as a timeless person