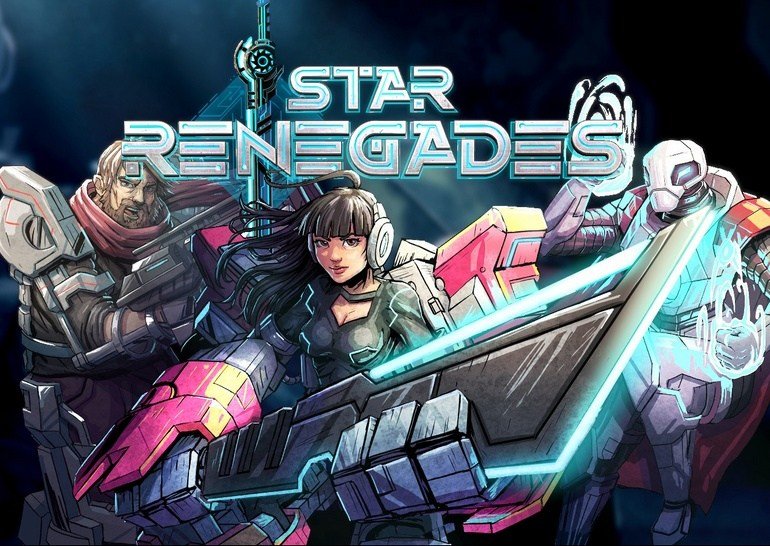 So, unknown aliens are attacking your planet. There are many of them, and they are stronger. They quickly suppress any resistance, and you yourself die in battle … But this is not the end. In another place, at another time, on a planet besieged by the same evil aliens, a certain scientist manages to send a bot carrying a message through the portal. A message to yourself in another dimension. He warns his counterpart of the impending invasion and asks to organize a resistance. The military gathers a team of thugs capable of … to advance a little further in confrontation with the aggressor, to die heroically, but manage to transmit the message to the next reality, where their counterparts will be preparing for the inevitable battle. And so on, until one of the teams gathers enough knowledge, experience and weapons to end the invasion in at least one of the dimensions.

As you already understood, the Star Renegades roguelike system is explained in terms of the theory of parallel universes. The fallen fighters pass on to their heir counterparts information about the lieutenants of the Imperium and the resources necessary to unlock the augmented characters, their main features and weapons. Everything else – experience and levels, new skills of the heroes and statuses of relations between them, are preserved only within one universe. However, these are parallel worlds, they are indistinguishable. ????

YOU CAN ALSO READ:  WRC 9: The Last Dance of the Kilotons

Like Halcyon 6 Starbase Commander, the studio’s new game is made in the style of pixel art. But over the past 4 years, Massive Damage artists have seriously pumped up their skills, and Star Renegades looks fantastic. Especially on the map and battle screens, and especially in dynamics. Despite the fact that this is an isometric game, there is a sense of volume, depth of field, dynamic lighting, lighting of sprites of heroes and opponents when using weapons or effects, etc. In terms of pixel art, I would put Star Renegades next to a visual masterpiece like Children of Morta. They are different in style, but the pixel art detail is similar here.

The combat system of Star Renegades is also inherited from Halcyon 6. This is turn-based battles between enemy squads (ours on the left, the bad guys on the right), but in Star Renegades, the sides do not take turns, as in the previous game, but within a single timeline during one course. And the basis of the battle is the interrupt system. Most attacks or special abilities not only deal damage to the enemy, but also stun them, moving to the right along the timeline. If some action moves the fighter off the scale, then he will completely lose his turn. It should be borne in mind that if you or the enemy act before the target of the attack, then you inflict guaranteed critical damage, with very significant bonuses to damage.

So the whole combat strategy in Star Renegades is based on shifts, interruptions and critical damage. To do this, you need to calculate your actions and their consequences for the move ahead, as well as take into account future delays in the actions of all your characters and opponents. This is an interesting tactical task, including for spatial thinking (not all points on the battlefield can be reached at once). Naturally, different heroes, and there are more than a dozen of them here, interact with each other in different ways, moreover, depending on the bonuses of relationships that can be developed with the help of special cards at the halts, they can also receive combo attacks that cause colossal damage.

To defeat the adversaries from the Imperium, our rebels need to stop the aliens on three planets, preventing them from extracting the energy cores of the ancient Titan race that left the universe, and then go to the enemy ship to deal with the mysterious Mother (no, this is not the same android, that in the TV series Raised by Wolves). In the final battle on each of the planets, the passage of which consists of 7-10 battles, you will meet the Giant, an especially large boss with a huge line of shields and health. Plus, among ordinary fighters of the Imperium, lieutenants with unique bonuses will come across from time to time, for defeating which you can receive a special reward.

Although Star Renegades’ combat system is unusual and seems daunting at first, once you get the hang of it, the first two planets will stop causing you any problems and become a chore. Yes, these 15-20 battles can be spent on mastering new heroes and searching for combos that can break the enemy’s resistance on the third planet or in the final battle … But on the fifth playthrough, kill the same soldiers of the Imperium, without getting a shot in return, just boring. And this is perhaps the main problem of Star Renegades. At the same time, it is impossible to give the player the opportunity to start a campaign from the second or third planet, he simply will not have time to pump his heroes.

As a result, despite the interesting combat system, Star Renegades’ roguelike is not perfect. In the same Hades, due to the use of different weapons and gifts of the gods, it is interesting to crumble enemies for the twentieth and hundredth times, but here, alas, not.

However, Star Renegades is a good noteworthy game. It has an interesting combat system, a good selection of fighters of different specializations, gorgeous pixel graphics and good humor, which we remember from Halcyon 6. I can’t say that I recommend to immediately buy this game for all fans of turn-based “roguelikes”, but add it to the list desired and purchased at one of the sales is definitely worth it. At least because of the graphics.

Cons: Once you understand the combat system, the first two planets become a boring chore