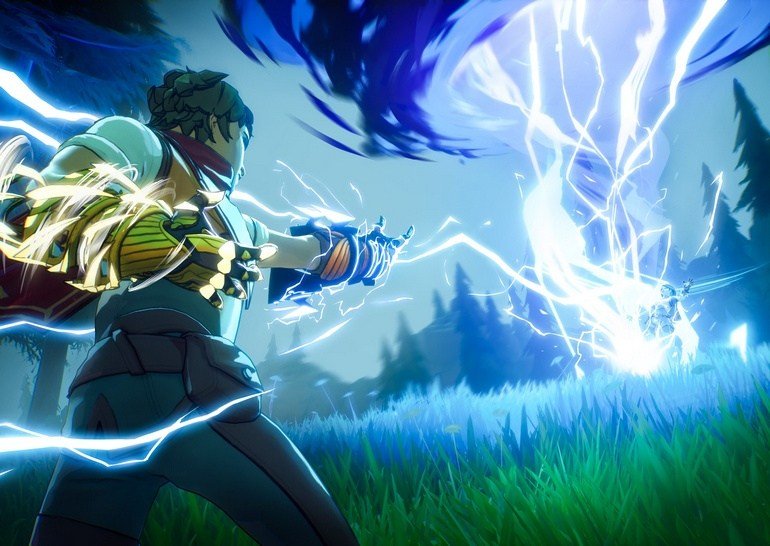 Tired of the militaristic Battle Royale in a modern setting with firearms? Try something new – elemental duels of magic in Spellbreak from Proletariat. A few months ago, the game was released in Early Access on the Epic Games Store and consoles and finally appeared on Steam in mid-December.

The main feature of Spellbreak is the ability to combine various elements. Your character can equip two different magic gloves for the right and left hands, applying magic alternately to achieve the best effect. Also, you can change the magic cast by the enemy and even direct it against himself. Put ice on a tornado – you get an ice storm, add ice to a wall of fire – you get a cloud of steam, lightning to water – an electric “floor,” ice to a cloud of poison – an ice wall, etc. There are really many options. The main thing is to monitor what is happening on the battlefield closely and not miss the right moment to cast the spell. However, it is tough to figure out what is happening around, especially if two detachments of three magicians in each, armed with gloves of different elements, participate in the battle.

YOU CAN ALSO READ:  Activision spoke about the features of the new Call of Duty: Black Ops Cold War

Fighting in Spellbreak follows the usual pattern for Battle Royale. Single fighters, deuces, or squads of three are thrown into a huge arena, where they must search for equipment, gradually converging, under the onslaught of the oncoming storm, to the center of the map. Equipment, two gloves, a rune of movement, armor, an amulet, and boots, as in ordinary action / RPGs, is divided into rarity classes, marked with white, usual colors green, blue, purple, and gold.

Two basic spells are available to you with two equipped gloves and a rune, differing for different elements, two ults, and a movement spell – teleportation, flight, jump, dash, or invisibility of several types. The pumped rune spells allow you to move quite freely around the battlefield. Also, all magicians can levitate, spending mana on the flight instead of spells. This, as well as the presence on the map of numerous multi-story ruins and complex terrain, makes the battles, especially in the last stages of the battle, no less vertical than in the same Hyper Scape. However, there are not many urban landscapes and rooms inside buildings where you can hide.

In addition to the Battle Royale for singles, twos, and threes, Spellbreak also has an almost classic team deathmatch with players respawning instead of permanent death. These 9v9 battles take place on the same map as the Battle Royale, and before you converge in the center, you will be able to arm. Due to the knocked out players’ respawn and the simultaneous participation of almost two dozen mages in the battle, such battles are much more intense than in the main mode. Moreover, in Deathmatch, every time you are reborn with the same set of ammunition with which you died while leaving copies of the same items on the ground at the place of death, which allows almost all of its participants to arm themselves to the teeth in five minutes of the final battle.

YOU CAN ALSO READ:  Don't worry about buying a GeForce RTX 3090 for gaming

In addition to various spells for different hands and their combinations, in Spellbreak, each of the mages unlocks additional skills right on the battlefield, corresponding to his base class. This happens when you get a level, which is given when you reach the next zone of narrowing the map. Plus, before starting the battle, you can choose a basic glove for the leading hand (you cannot change it, only improve it) and a set of perks. New player features are unlocked as you level up your account.

Traditionally for battle royale, Spellbreak is a free game, the authors plan to make money on cosmetics, and the sale of seasonal battle passes. There is even a certain plot in the seasons, which is described by static characters in the main menu of the game, but I’m afraid that few people pay attention to it.

A nice feature of the game is crossplay, which allows you to maintain an acceptable number of players online. The only question is how long the developers will be able to keep the audience’s attention. In the 10 days since the release of Spellbreak on Steam, the number of players on the Web has dropped from 4 to 2 thousand, and, apparently, this trend will continue.

Nevertheless, during the off-season, when Cyberpunk 2077 has already been completed and new games are not expected for a long time, Spellbreak can be given a chance. It is free, funny, and surprisingly easy to play. You have to go through a dozen of the first battles and figure out the nuances.

Minuses: It is unclear how long Spellbreak will be able to maintain an acceptable number of players online; at first, the battles in the game look too chaotic

Conclusion: Variation on a battle royale theme with levitation and magic combinatorics