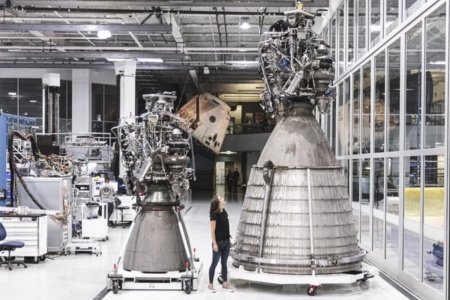 SpaceX has taken another small step forward in creating a next-generation spacecraft to colonize the Moon and Mars with static firing tests of the Raptor Vacuum Engine (RVac) for Starship. About this company representatives reported on Twitter, posting a short burned video on a test bench.

The full duration firing tests took place at the McGregor, Texas test site. SpaceX representatives do not report any additional information on the results of testing the engine.

Apparently, this is the first firing test of a vacuum version of the Raptor. At least, the company assembled the first such engine only at the beginning of this month. The title photo shows the atmospheric and vacuum versions of the Raptor engines – you can clearly see the difference in size.

The final version of Starship will receive six Raptor oxygen / methane engines, of which one half will be optimized for maneuvering at low altitudes and in dense atmospheres, and the other will be adapted for operation in airless space.

Next month, the next major SpaceX presentation on the Starship project will take place, and there is a high probability that by that time Elon Musk’s company will have time to conduct the first full flight tests – the Starship SN8 prototype, which will receive a head fairing and air rudders, will rise to a height of 18 kilometers (half the distance to the upper boundary of the atmosphere) and will land back at the cosmodrome. Its assembly has already been completed, today the Starship SN8 prototype will be delivered to the site, and on September 29 the engineering team will begin testing, starting with traditional ground tests.

Starship SN8 rollout likely Sept. 26 between 7 am and 8 am, with proof testing beginning Sept 29 with a window lasting from 9 pm to 6 am.

All times are central time.https://t.co/OGopaXBoI7

The SpaceX engineering team is also working hard to create the first Super Heavy booster prototype to launch Starship into space. As we recently found out, the Super Heavy will not receive 31 Raptor engines, as originally planned, but 28 to simplify the configuration.

SpaceX expects to conduct the first launch of a full version of Starship in 2021, after which, if everything goes according to plan, in 2022 the first Starship ships without a crew should fly to Mars with various kinds of equipment in preparation for colonization, in 2023 – using Starship send a tourist delegation to the moon (flyby without landing), led by the Japanese billionaire Yusaku Maezawa.