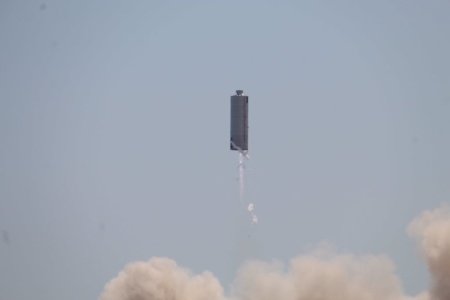 Today, September 3, SpaceX is not only sent another batch of 60 Internet satellites into orbit as part of the Starlink 11 v1.0 mission (the orbital constellation exceeded 700), coming close to the long-awaited launch of the global project for an ultra-fast and relatively inexpensive satellite Internet, but it has also become one step closer to the main goal – colonization of the Moon and Mars. About an hour ago, SpaceX conducted its second flight test in the last month of a prototype of the second stage of the Starship super-heavy rocket. Test broadcast passed on the NASASpaceFlight YouTube channel.

Starship and Super Heavy are promising super-heavy rocket and spacecraft being developed by SpaceX to replace the current family of Falcon rockets and Dragon ships. The second stage simultaneously acts as a manned or cargo spacecraft. The rocket is being designed as fully reusable, both of its stages will be able to make a soft landing after a flight into space. The rocket will be capable of delivering cargo weighing up to 150 tons in a fully reusable configuration with the return of both stages (Super Heavy and Starship) to Earth, as well as the possibility of docking and refuelling in orbit. SpaceX plans to launch manned missions on this rocket in the coming years to create habitable bases on Mars and the Moon.

Last year, SpaceX conducted a series of successful tests on a scaled-down Starhopper mockup (aka pepelats and “water tower”) – first there were static tests of the Starhopper engine on land, and then we saw the first flight tests of the Starhopper test with ascents to altitudes of 20 and 150 m. On August 5, Starship SN5 (fifth production test vehicle) with one Raptor engine made its maiden flight at 150 meters. The previous four (Mk1, SN1, SN3 and SN4) were destroyed in earlier stages of testing.

And tonight the next Starship SN6 prototype, powered by the Raptor SN29 engine, repeated the success of the Starship SN5. He climbed 150 meters, shifted slightly to the side and softly landed on a nearby site near the starting point.

Under the power of Raptor SN29, SN6 has completed a near-mirror test of SN5’s hop!

The tests, as usual, took place at the SpaceX cosmodrome in the village of Boca Chica near Brownsville in the southern part of Texas, where all the main work on the project is underway.

It is expected that in the near future, both prototypes – SN5 and SN6 – will make several more such short jumps to consolidate their success and collect even more data, after which a suborbital launch will take place, in which the prototype ship will rise to an altitude of 20 kilometres (half the distance to the upper the boundaries of the atmosphere) and will land back at the cosmodrome. The final version of Starship will have six Raptor engines, of which one half will be optimized for low altitude maneuvers and in dense atmospheres, and the other half will be adapted for airless operation. SpaceX expects the first full-fledged Starship launch to take place in 2021.

Now SpaceX, following its aggressive rapid prototyping approach, is building the following prototypes in parallel – each one better than the last. In addition, this week SpaceX is starting (may have already begun) assembling the first prototype of the Super Heavy booster for launching Starship into space.

SN5 has hopped.
SN6 has hopped.
Both may hop more times.
SN7.1 will pop.
SN8 will hop with a nosecone.
SN9 is being constructed.
SN10 parts are arriving.
Oh and Super Heavy!

An important project update – the Super Heavy will not receive 31 Raptor engines, as originally planned, but 28 to simplify the configuration.

The outer ring of the engines will consist of 20 Raptor engines with a thrust of 250 ton-force (at sea level) each. The dimensions of the tanks will be increased to 2,000 tons, and the dry weight of Super Heavy will be “less than 100 tons.” The fuel will be supercooled, with oxygen to methane ratio of 3.5: 1 or 3.6: 1. Musk spoke about the updates on the project at the Humans To Mars virtual press conference.

YOU CAN ALSO READ:  SpaceX Falcon 9's first launch in 2021 is set for Thursday night

The next major SpaceX presentation on the Starship project is scheduled for October, and by that time, Elon Musk’s company may even conduct the first flight tests of a booster prototype. So before creating a fleet of starships to support life on Mars a stone’s throw.

Neuralink this month & Tesla next month, SpaceX probably October. We will have made a lot of progress by then. Might have a prototype booster hop done by then.

YOU CAN ALSO READ:  Huawei is building a semiconductor manufacturing plant without US technology, the first products will be based on 45nm process technology
0