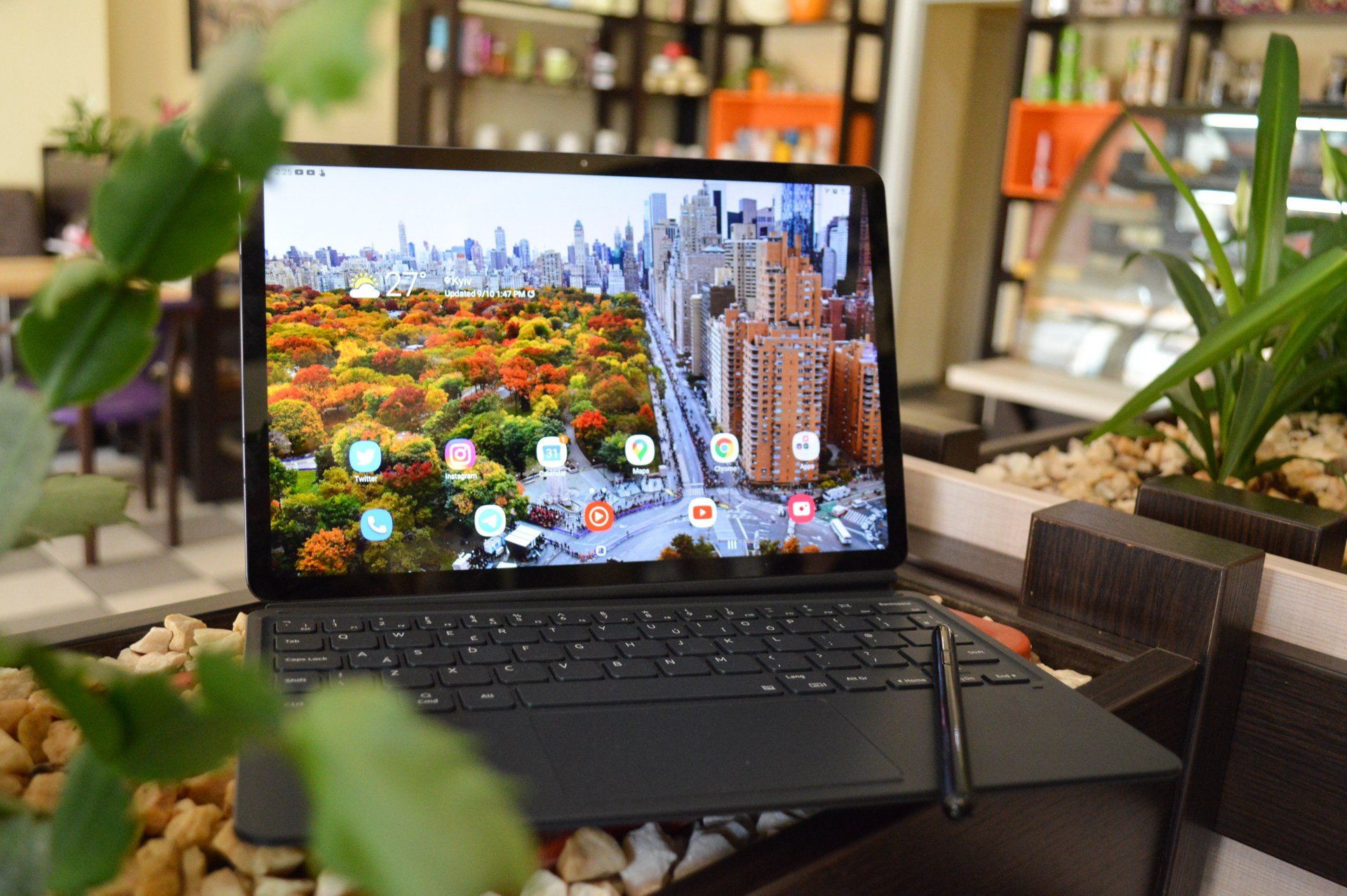 Android tablets are a very interesting category of devices. They seem to exist, but at the same time, the demand for them is falling every year. This is due at least to the increase in the diagonal of smartphones, which is why an additional gadget with a large screen was simply not needed by most users. And yet Samsung is trying to revive the market by releasing new tablet models. Today we take a look at the flagship model Galaxy Tab S7.

The Galaxy Tab S7 looks like it should be a premium device: thin aluminum body, great build, narrow bezels around the screen. A tablet came to us in a “mystically black” color, which definitely adds solidity to it. On the back panel, the place for attaching and charging the proprietary S Pen stylus is nicely beaten, which visually continues the dual camera unit. 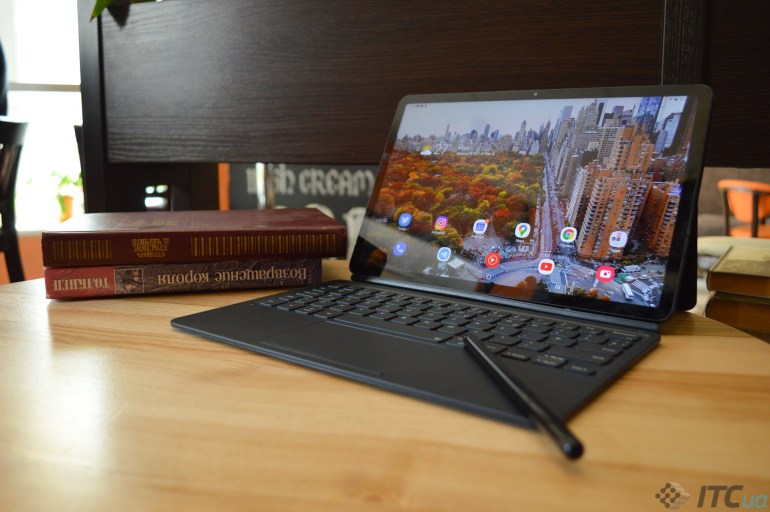 If you hold the tablet horizontally, there will be a USB-C port on the right side, on the bottom there are connectors for connecting a keyboard, and on the top there is a slot for a SIM / microSD card, a volume rocker and a power button, which has a built-in fingerprint scanner. The latter, by the way, is located flush with the body and can be difficult to find. 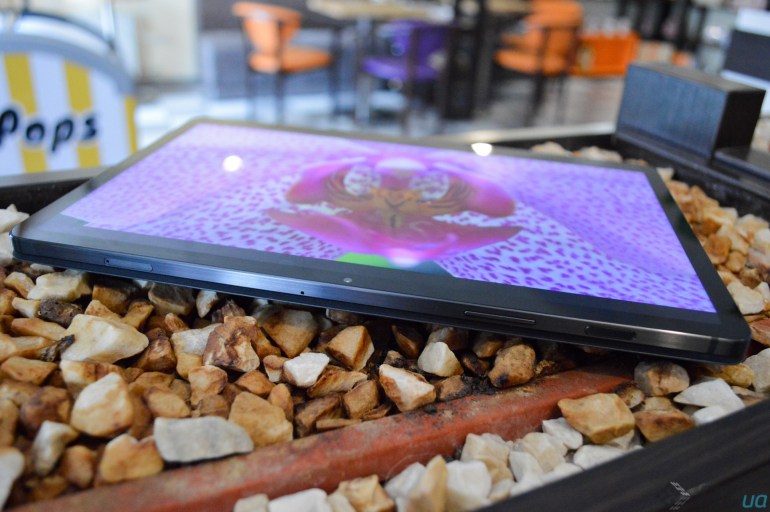 Overall, the design, as well as the feel of the Galaxy Tab S7, are commendable. The same can be said about branded accessories. The case, which attaches to the back cover, allows you to hide the S Pen so that it does not get lost, and also has a folding leg for easy fixing of the tablet on a flat surface. 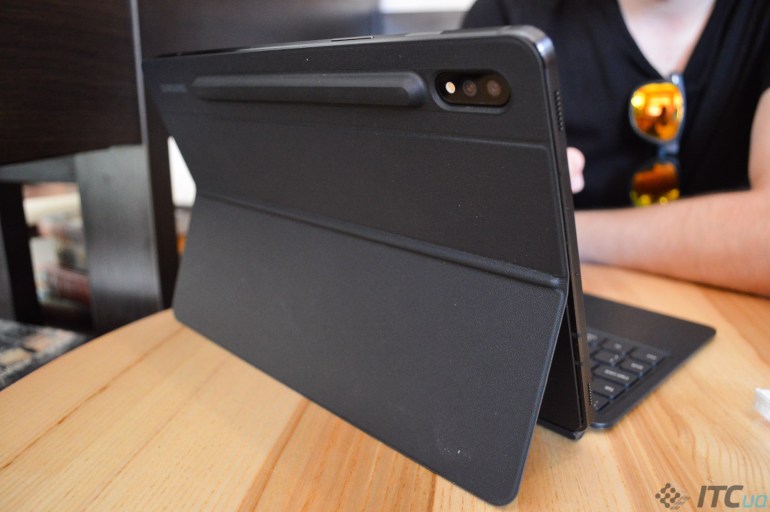 The keyboard is made of matte plastic that is resistant to fingerprints. The keys are slightly more compact than conventional laptops, and there is no backlight. You probably won’t want to work with large amounts of text, but to compose a letter or make edits it will do. Moreover, the keyboard has got an enlarged touchpad and a block of function keys, when compared with its predecessor.

The new generation S Pen stylus has become even more comfortable to hold in the hand, there is one key to activate additional functions. The accessory is made of plastic; there is a flat edge that is magnetised to the side of the tablet or to a special place on the back panel. The S Pen correctly recognizes handwriting input, allows you to take notes in PDF documents, and supports contactless gestures. Artists should rate 6 months of free use of Clip Studio Paint and 30 days of Canva Pro.

The Galaxy Tab S7 line is presented in two models: in fact, the regular version, as we have in our review, and the Galaxy Tab S7 + variant. And if the “plus” is equipped with a 12.4-inch AMOLED-display, then in our case it is an 11 ”LTPS LCD-display with a resolution of 2560×1600 pixels and an aspect ratio of 16:10. The declared maximum brightness level is 500 nits. 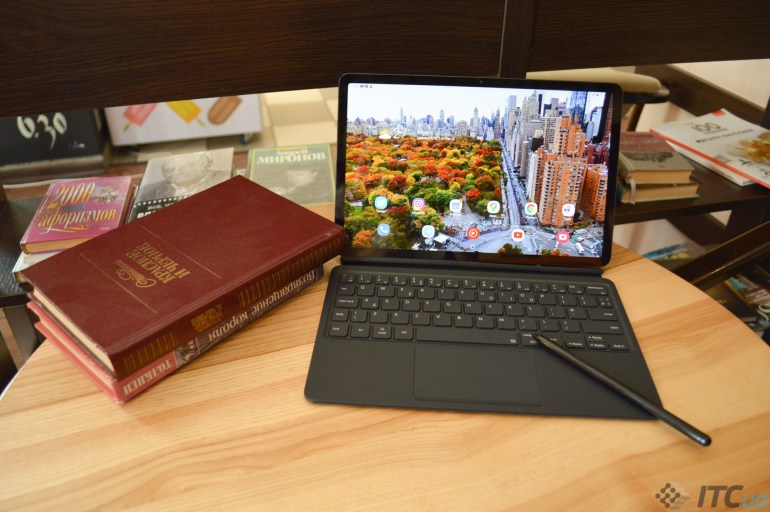 Despite the fact that the Galaxy Tab S7 does not formally have the top-end display, it is very difficult to find fault with its quality. Moreover, the screen supports refresh rates up to 120 Hz. Thanks to this, the picture is very smooth and you enjoy using the tablet.

Galaxy Tab S7 is equipped with SoC Qualcomm Snapdragon 865+ with Adreno 650 graphics. RAM in our version is installed 6 GB, internal memory is available 128 GB. I don’t think it’s worth talking for a long time about the fact that there are no problems with the performance of this device. Any heavy games, multiple windows, DeX mode – the tablet copes with all this with ease, while the body of the device does not get too hot. The results of synthetic tests only confirm my words.

The tablet is equipped with Wi-Fi 6, Bluetooth 5.0, GPS modules. An LTE modem is also available in our version. The SIM card tray is aligned with the microSD card slot. 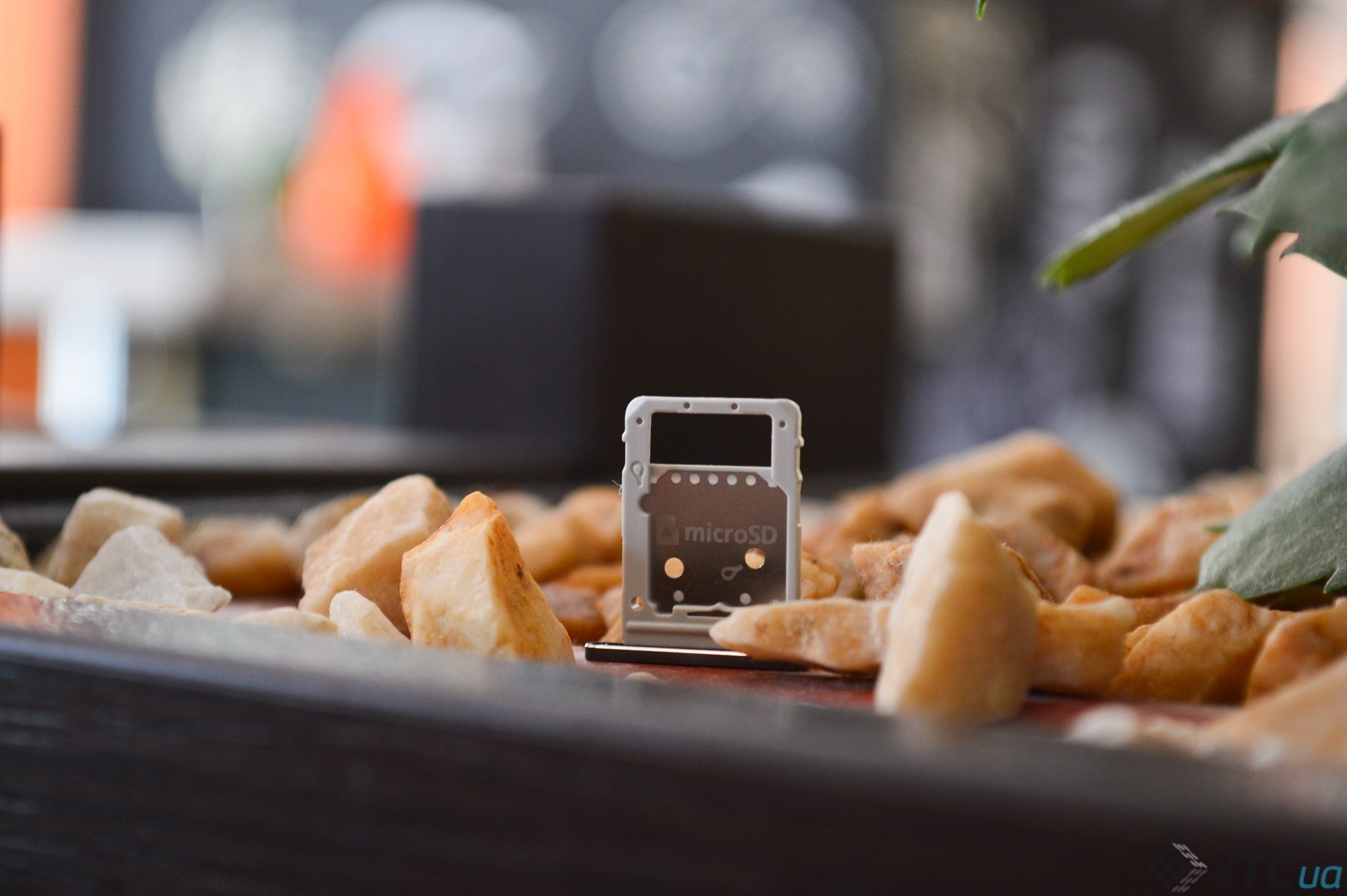 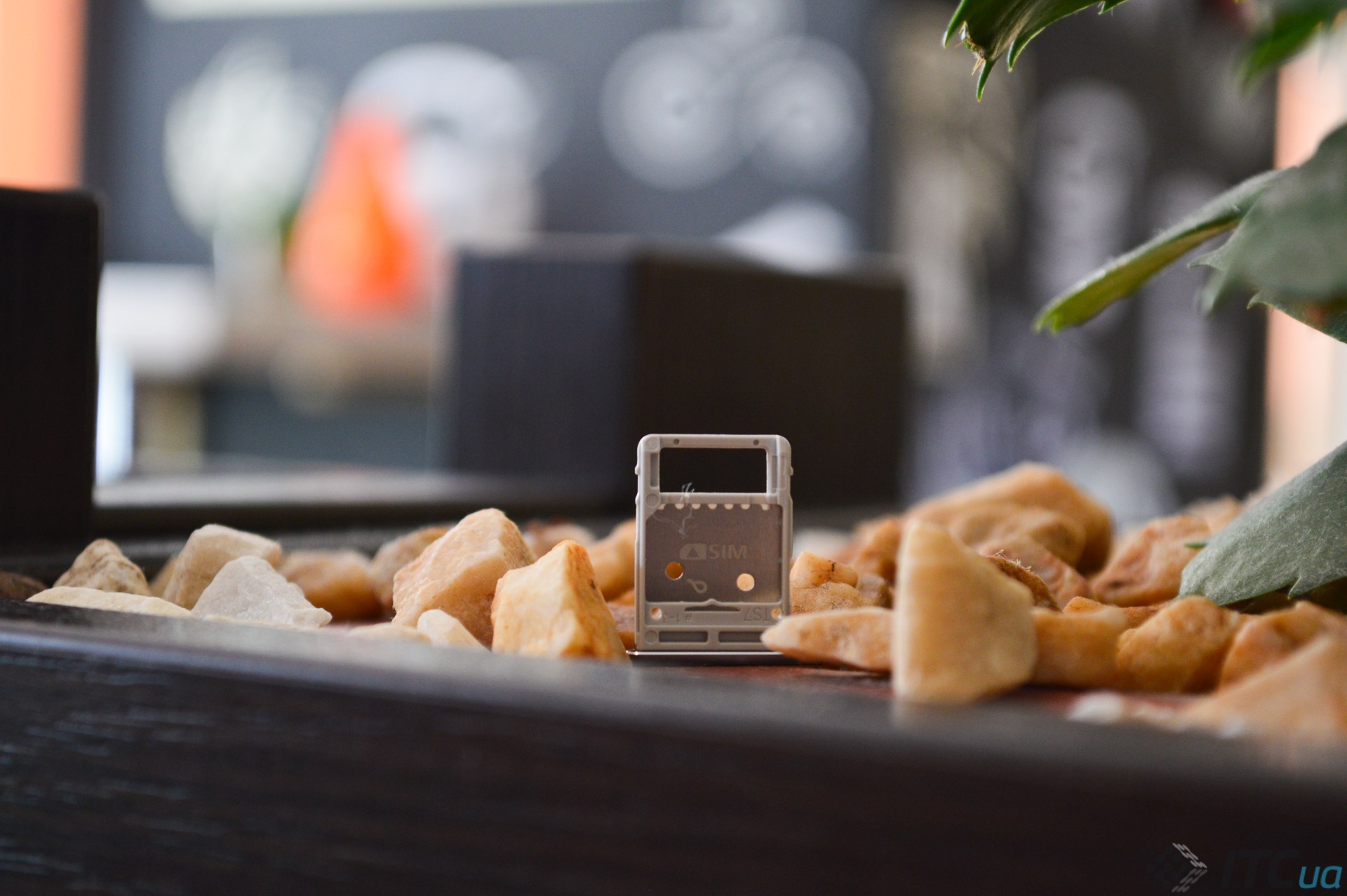 The battery capacity of the Galaxy Tab S7 is 8000 mAh. In the PCMark test, the tablet achieved a result of 7 hours 51 minutes. I think on average you can count on 2-3 days with normal use. But here it already depends on each specific scenario – if you use the tablet all day as a second computer, then you will have to put it on charge at night. By the way, the Galaxy Tab S7 supports 45W fast charging.

The tablet has four speakers, which are located on the side faces, if you hold the device in a horizontal orientation. AKG specialists were responsible for adjusting the sound, as evidenced by the logo on the rear panel. The Galaxy Tab S7 sounds very loud, while being very high quality and rich. Enough to listen to your favorite playlist or watch a movie. However, in games, when you hold the tablet horizontally, you will most likely block one or two speakers. 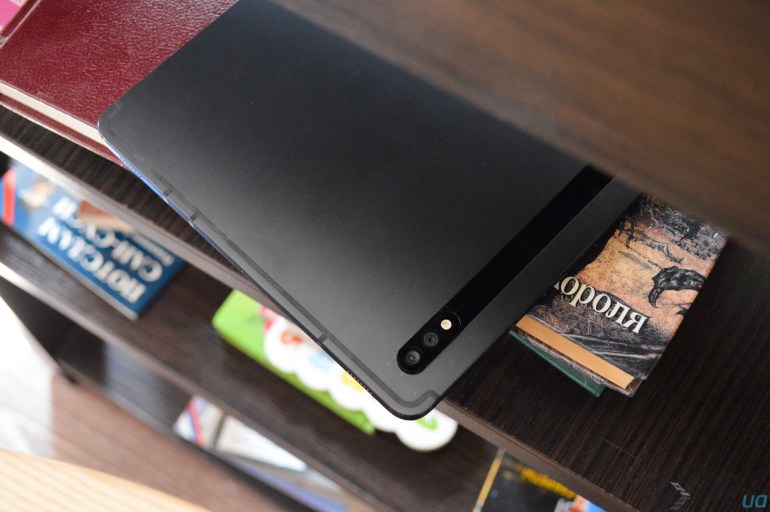 There are two cameras on the back of the Galaxy Tab S7. The main one has a resolution of 13 megapixels and an f / 2.0 aperture. Additional wide-angle module 5 megapixel, aperture f / 2.2. Supports 4K video recording at 30 fps. As for a tablet, the shooting quality is at an acceptable level, but let’s be honest – you will use the main camera only in extreme cases. But the front 8 megapixel camera is well suited for video calls.

I think the main problem of Android tablets is the lack of special software for them, because the user, in fact, gets a smartphone shell stretched over a large screen. Moreover, many apps do not support tablet mode, which negatively affects the user experience.

The Galaxy Tab S7 runs Android 10 and OneUI 2.5. Samsung, however, continues to develop its DeX system, which is getting better and faster every year. At the moment, it reminds me of Chrome OS – it seems that you have a laptop in front of you, but still you understand that its functionality is reduced. In the new version of DeX, the taskbar has changed, various touchpad gestures are supported, you can change the zoom. Multi-window mode works smartly, if you pull the application to the side, it will open half the screen. 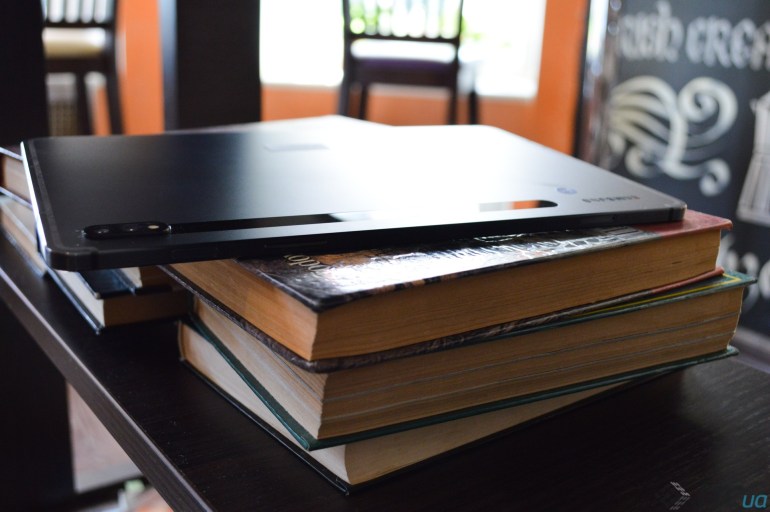 Still, the Galaxy Tab S7 cannot be called a complete laptop replacement. It can be a useful addition to your device ecosystem, albeit an expensive one. The tablet captivates with its portability, but during operation you will have to make compromises in the form of the absence of the usual software and a more compact keyboard. The device is convenient for recreation, but again there are questions about the advisability of buying it if you have a smartphone and laptop.

Output: In the end, the Galaxy Tab S7 is a great device in terms of hardware, the value of which is diminishing due to the lack of software for tablets. It has a cool design, top-end performance, good battery life and pleasant sound. But DeX mode alone cannot force third-party developers to adapt their applications for tablets, so we have the same mobile versions of applications in desktop mode.