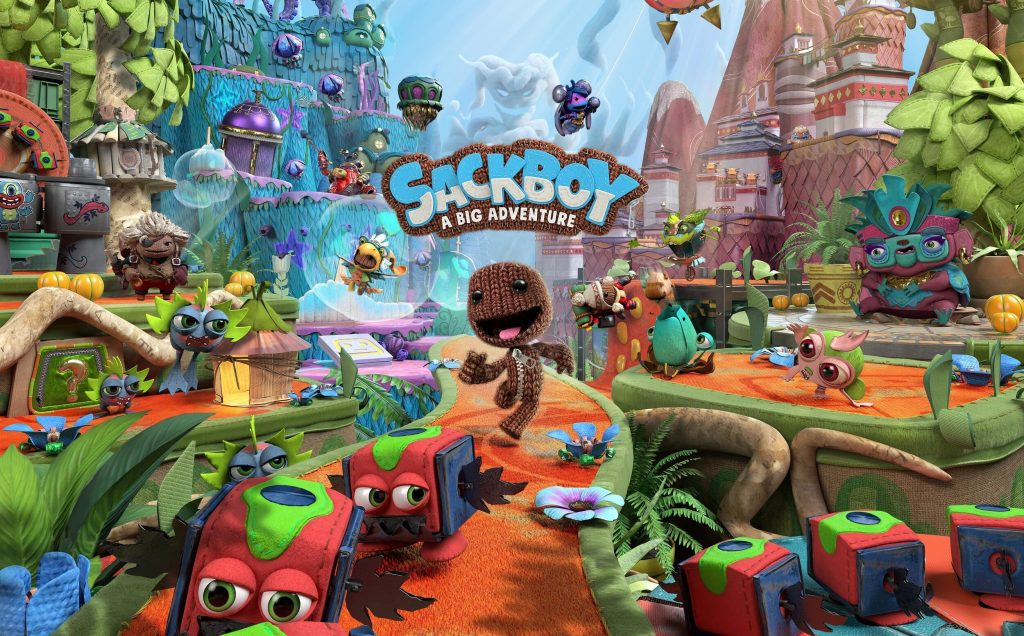 The Little Big Planet franchise has been loved by gamers for twelve years, not least for its unique style and endless creative possibilities. The spin-off about patchwork men’s new adventures retained the familiar visual style but had to say goodbye to creativity.

The peaceful existence of the rag men is once again darkened, this time by the appearance of Vex, a huge rag villain who kidnapped all the inhabitants of Kraftworld to build the Chaosinator – a machine that would spread evil and chaos. Well, most likely, because the game doesn’t go into such details. The main thing is that Vex is evil, friends are kidnapped, and the whole world of creativity is in danger, so it’s time for Sackboy to go on another journey.

And let’s first dwell on the most important thing – Sackboy: A Big Adventure is a frankly childish arcade platformer. The game is fun, colorful, moderately difficult, and just incredibly cute, but it lacks a zest that can hook an adult. And the point here is not in the general cartoon or simple plot, the same Super Mario 3D World, to which Sackboy’s new adventures are much more similar than, in fact, to Little Big Planet. All of the above does not interfere.

You won’t have to look for a clue for a long time. The thing is that an experienced player will not find new game mechanics in A Big Adventure, the whole game, like its main character, consists of scraps borrowed from other projects. Moreover, adventures tailored for a young audience will not throw an experienced player at least some serious challenge. From the first, and sometimes from the second time, collecting all the collectible items on the level and discovering all the secrets is unlikely to work. Still, most often, this will happen because the game was originally designed for cooperative passage, and solo in one run to complete all possible activities in the location is simply impossible. Co-op for four players, by the way, only works in local mode, online promise to add in one of the next patches.

Each of the five worlds that Sackboy will visit is divided into game levels, which are isometric dioramas with occasional branches and alternative routes. The levels, however, are absolutely linear. However, the developers are trying to diversify, passing them with gadgets or using the environment – somewhere to move forward. It would help if you used a grappling hook, rocket bots, or sticky goo that allows you to walk on walls. Somewhere to jump on moving platforms and jump from one air bubble to another, but there are no situations when you need to stop and look around to assess the situation and understand what to do next. On the contrary, the game pushes Sackboy in the back, often literally, with a moving screen – run, run, don’t look back. This worked especially well at musical levels, where, like in Rayman Legends, the game world lives on, and enemies and Sackboy fight to the rhythms of Madonna, David Bowie, Britney Spears, and Mark Ronson. Frankly, it’s even a pity that Sackboy: A Big Adventure does not consist entirely of such levels (which could be the very missing highlight), diluted with the challenges of knitted knights – short races with obstacles for a while, which turn out to be really difficult if you set a goal get gold.

Not that the usual levels are so bad, they have a great design. Still, when passing them, the limited arsenal of Sackboy’s techniques becomes obvious – hitting, jumping, being able to hover for a split second in the air, rolling, dragging objects, and, by and large, everything. Gadgets are issued only at certain levels. No combinations, as in the same Super Mario 3D World, are not provided. Again, this is most likely because the game is aimed at a child audience. Still, even here, Sumo Digital made an annoying mistake – the accuracy of jumping in the game leaves much to be desired. There are no difficulties with hitting the next platform, but landing on the enemy’s head – the task is already a little less trivial. Anyway, there is something wrong with the positioning of the character in the air in A Big Adventure; for some reason, hitting an object in a jump is much more difficult than it should have been.

It is also a bit odd to see a huge amount of collectibles to change Sackboy’s appearance without a level editor in the game. As in Little Big Planet, the little man can be changed beyond recognition. In each game world, there will necessarily be a couple of costumes and individual elements, which the player can combine in any order, creating his own unique rag knight, but Sackboy: A Big Adventure is relatively a short story, and that “margin of safety” that Little Big Planet had thanks to the huge number of custom levels, it does not, and, accordingly, does not have much motivation to collect numerous costumes.

However, as we have already said, evaluating this game from an adult’s perspective is not the best idea. It was conceived as a kind, colorful adventure for a young audience, which is exactly what she is doing well. I would like to believe that one of the tasks of Sackboy: A Big Adventure was to introduce the younger players, who have not found the times of the PlayStation 3 and 4, to the Little Big Planet universe, and soon we will see a full-fledged sequel.

Conclusion: Not a big adventure in the Little Big Planet universe for very young players