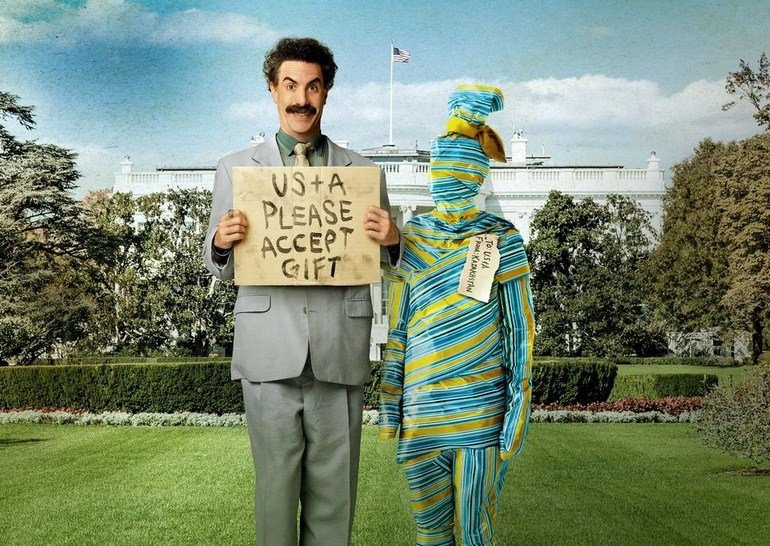 It seems that we began to forget that Sacha Baron Cohen is not only a good dramatic actor (see the TV series The Spy and the film The Trial of the Chicago 7), but also a brilliant comic-improviser / provocateur. Well, Cohen’s new film, Borat Subsequent Moviefilm / “Borat 2”, will remind you of this incarnation.

Back in 2006, immediately after the successful release of the first Borat (Recall that the full official title of the film sounds like Borat: Cultural Learnings of America for Make Benefit Glorious Nation of Kazakhstan), which grossed $ 262.6 million at the worldwide box office with a budget of only $ 18 million, there were rumors about a possible sequel to the film. Moreover, in early 2007, Rupert Murdock himself announced that Sacha Baron Cohen had signed a contract with 20th Century Fox for a second film. But a little later, Cohen himself announced that he was planning to “bury” this character – Borat Sagdiev became too famous to deceive ordinary people with impunity.

However, Cohen has resurrected the character several times over the past 14 years, mostly to promote his other films. In November 2018, Borat Sagdiev even called on the Americans to come to the midterm elections (recall that Cohen is a British citizen). In general, over the past few years, the actor himself has become more interested in politics, and it was he who insisted on the release of “Borat 2” on the eve of the US presidential election in order to “warn Americans against sliding into an illiberal democracy.” However, this is far from the only anti-republican film / television project that aired within a month before the election, let us recall at least The Comey Rule or The Trial of the Chicago 7 / The Trial of the Chicago Seven. Well, the sympathy of the film industry has always been on the side of the Democrats.

YOU CAN ALSO READ:  The first photos from the set of Uncharted: Tom Holland as Nathan Drake, meeting with Nolan North and others.

Like the previous film, Borat Subsequent Moviefilm (the full name is traditionally monstrous – Borat Subsequent Moviefilm: Delivery of Prodigious Bribe to American Regime for Make Benefit Once Glorious Nation of Kazakhstan), is built on improvisation and deception of the shooting participants – this is pure satirical mockumentary. All the participants in the picture, except for Cohen himself and two more actors, are ordinary ordinary people who were not warned in which shootings they were participating. Most of these scenes are improvisation without any script. Considering that after the previous film, Borat Sagdiev has become too prominent a character, easily recognizable by most Americans, Borat in the new film resorts to various disguises in order to remain incognito, appearing in his usual guise only in a few scenes, as a rule, only with the participation of other actors …

During the filming of the film, Borat and his team managed to get into various official events, including the Conservative Political Action conference, which was attended by US Vice President Michael Pence; to take a fake interview with Rudy Giuliani, during which they tried to provoke him into sexually inappropriate behavior; mock the American right during a rally against restrictions caused by the COVID-19 epidemic; defraud the plastic surgery clinic and abortion prevention center; show up in a synagogue as a cartoon Jew, etc. As with the previous film, many lawsuits have already been filed against Cohen, but most likely all of them will eventually be dismissed, as they were 14 years ago.

YOU CAN ALSO READ:  Review of the Romantic Series "The Bridgertons"

According to the plot of “Borat 2”, after the release of the previous film that made Kazakhstan the whole world, Borat fell out of favor with the authorities and was sent to the GULAG (don’t even ask!). But he still has a chance to earn forgiveness. To do this, the journalist must deliver to Donald Trump a gift from the people of Kazakhstan – a Kazakh sex star, Joni the monkey. Since it was impossible to get close to Trump himself, after Borat’s antics in the previous film, it was decided to give the monkey to Vice President Michael Pence. In the process of delivery, something went wrong and in the United States, along with Borat, was his 15-year-old daughter, whom he decided to give to Pence as a sex gift. But first, the daughter must be prepared for this, suitably dressed, made up, taught to behave in society, etc. Actually, “Borat 2” is even more the adventure of Tutar Sagdieva, and not Borat himself.

And here I must say that the filmmakers were incredibly lucky with the actress. The Bulgarian Maria Bakalova, chosen out of 600 applicants, fits perfectly into the film and at times simply draws all the attention to herself. Moreover, Bakalova looks good both in the role of a wild “Kazakh woman” who grew up in a barn, dreaming of a personal cage, and in the role of a sexy novice journalist interviewing Rudy Giuliani. An excellent find, we hope that after this film Bakalova will be invited not only to Bulgarian films.

YOU CAN ALSO READ:  Review of the fantastic TV series: Alice in Borderland

If we talk about “Borat 2” in general, then the general similarity with the first film does not benefit the sequel. The painting looks secondary and not as funny as the original. The fact that the film was filmed at the beginning of the COVID-19 pandemic, when the jokes about the virus still looked funny, played a role here; now, after hundreds of thousands of deaths, it doesn’t seem so much fun anymore.

Notwithstanding the above, Borat Subsequent Moviefilm is a pretty good movie overall. Cohen, as before, hits sore spots and flaunts the stupidity of ordinary Americans, it is not surprising that in the scenes where Borat performed in his usual guise, the actor was asked to wear a bulletproof vest.

Overall, if you liked the first Borat, chances are you will get some pleasure from watching the sequel. However, the shock effect that the original film produced is no longer expected from Borat 2.

Pros: Aggressive and politically incorrect satire in Cohen’s usual spirit; most of the scenes in the film are not staged; excellent acting work of Maria Bakalova

Cons: The sequel looks secondary; clear political bias of the authors; an abundance of jokes “below the belt”

Conclusion: Overall, a good satirical film in the spirit of Sasha Baron Cohen, which, nevertheless, is inferior to the original