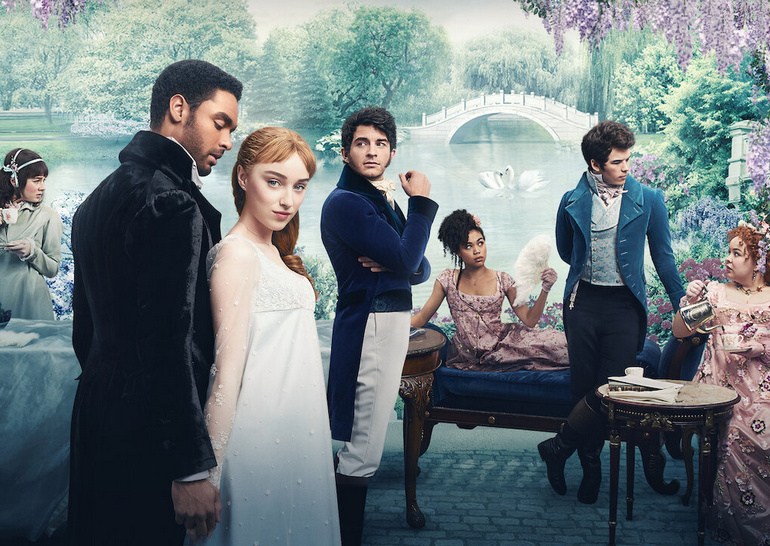 The inclusion of the pseudo-historical series Bridgerton / “Bridgerton” in the article “The Most Interesting New Series of December 2020” has led to the emergence of many negative and sometimes overtly racist comments. Well, one can only imagine what kind of storm will break out in the comments to this review, especially since Bridgerton turned out to be quite acute, watch-worthy romantic comedy/drama, in which already in the second episode you stop paying attention to the skin color of the characters.

The Bridgerton series is based on Julia Quinn’s series of pseudo-historical women’s novels of the same name, so you shouldn’t look for historical accuracy in it. However, the social background, traditions, and rules of behavior in high English society during the Regency are described in it quite accurately, thanks to the primary sources in the form of novels by Jane Austen. The author undoubtedly relied on. The events of the series itself, unlike the books, take place in an alternative reality, and the appearance of a large number of aristocrats with African roots is even explained by a certain point of divergence in the past. By the way, this is not a fictional story at all – a discussion of the African roots of Queen Charlotte, wife of George III, and grandmother of Queen Victoria, has been going on for some time in near-historical circles. The fact is that one of Charlotte’s ancestors, the Spanish aristocrat Margarita de Castro and Sousa, had a mixed origin, whose roots stretch back to the 13th century, to King Afonso III of Portugal and his mistress, Madragan Ben Aloandro. Madragana was Muslim and had the dark skin characteristic of some tribes that the Europeans collectively called the Moors. Recall that the ancestor of A.S. Pushkin, Abram Petrovich Hannibal, who was born either in Cameroon or in Ethiopia, was also considered a Moor.

However, this formal explanation, in my opinion, is even superfluous. Without it, Bridgerton, which already has some theatricality, looks quite organic, and the participation of black actors looks like another stage device, similar to that used in the musical. Hamilton, where black actors play all the United States’ founding fathers, and rap sounds from the stage. By the way, if you love musicals and for some reason missed Hamilton, we strongly recommend you watch it, especially since the film version of the play was released in summer 2020 on Disney +.

But back to Bridgerton. It is 1813, and the main task of all mothers is to bring out their eldest daughters and find a profitable party for them during the season. Marriage is the ultimate dream for most girls of that time. This is the only way to guarantee yourself, and often your relatives, a secure future. By and large, girls of aristocratic families were prepared from birth for marriage, and all they could dream of was getting married for love, which actually happened very rarely.

Violet, Viscountess Dowager Bridgerton, mother of four sons and four daughters, prepares to bring out her oldest daughter, Daphne. Daphne, like all girls of that time, desperately wants to get married. Still, a series of events leads to the fact that she is forced to make a deal with the enviable bachelor Simon Bassett, Duke of Hastings, who must help her attract wealthy suitors, but at the same time wants to avoid the attention of other girls for marriage. The fact is that the young duke vowed on the deathbed of his father, whom he sincerely hated, never to marry and have no heirs, thereby destroying the Hastings family. Considering that we have a series based on a women’s novel, you can roughly imagine what this union will lead to.

In general, Bridgerton is a traditional romantic story about two people who initially repel each other but eventually realize that they cannot live apart. However, the conventions and rules of life of the early 19th century superimposed on top of a simple story make it very interesting to watch. Yes, most of the scenes shown in the series are a kind of compilation based on Jane Austen’s works, but the authors have added modern narratives to the series.

For example, Bridgerton has some historically adjusted elements of Sex Education. Actually, Daphne Bridgerton’s complete unpreparedness for the sexual aspects of family life leads to misunderstanding and her quarrel with her beloved. Her mother is to blame for this, who literally did not mention to the young girl what awaits her in marriage. This is a typical attitude when men, including the mandatory brothels before marriage, were much more knowledgeable about sex. As a result, everything in the series will end well, of course. Still, if we remember that in many religious countries, and this is not only about Islamic states, girls’ sex education remained at the level of the early 19th century, the topic is relevant. Yes, the actual erotic scenes in the series turned out very well.

The second theme is that, despite the abundance of actors of Asian and African descent in the series, it is not a struggle for equality at all, but an emphasis on the fact that differences in skin color are much less significant than differences in social status, upbringing, education, etc. If you raise a child in a certain society from childhood, he will acquire habits, a manner, a point of view on the world of this particular society. The differences between aristocrats and merchants, or between urban and rural residents, are actually much bigger than between people of different skin colors who received the same education. With a certain upbringing, skin color does not matter at all. You do not notice it, as they did not notice it in Ancient Greece and Rome.

The third conditionally modern theme is feminism. Some women in Bridgerton do not want to endure men’s dictates but are ready to make their own decisions about their lives. Recall that women had practically no rights at that time. All decisions were made by the eldest man in the family, who might not even be their direct relative. Yes, this topic, somehow slipping into many women’s images in the series, is an anachronism. However, some women, including the same Jane Austen, began to talk about it at the beginning of the 19th century.

If we talk about anachronisms, then there are plenty of them in the series, take at least the same costumes and dances. Let me remind you once again that we are not talking about a historical work, but about a romantic story in conventional, and even alternative, historic scenery.

By the way, about the scenery. The work of the costume designers and decorators at Bridgerton deserves the highest praise. Despite some pretentiousness and interspersed with modern motives, the costumes turned out to be very bright, and the decorations were grandiose. And even though London was filmed here mainly in Bath, it all looks really great, although a little theatrical. However, this applies to many films and TV series about the era of the Regency. In terms of color saturation of the picture, bright dresses, and design, Bridgerton approaches Emma. / “Emma” – as for me, it’s even terrific.

Bridgerton is primarily a romantic story, and you should watch it with the person you have romantic feelings for. This is a beautiful, kind, and somewhat instructive fairy tale just for the Christmas holidays.

PS Julia Quinn has written nine books about the Bridgertons, each dedicated to a different aristocratic family member. If the creators of the series adhere to the chronology of writing, then the next part of Bridgerton will tell about the older brother of the heroine of the first season – Anthony, Viscount Bridgerton. And there’s no doubt that a second season will follow. Netflix has signed a multi-year contract with Shonda Rhimes (Grey’s Anatomy, Private Practice, Scandal) and her production company ShondaLand.

Minuses: Some theatricality of what is happening; the plot of the series is actually quite simple and is a kind of compilation based on the works of Jane Austen

Conclusion: A beautiful costumed romantic TV series worth watching only with your significant other