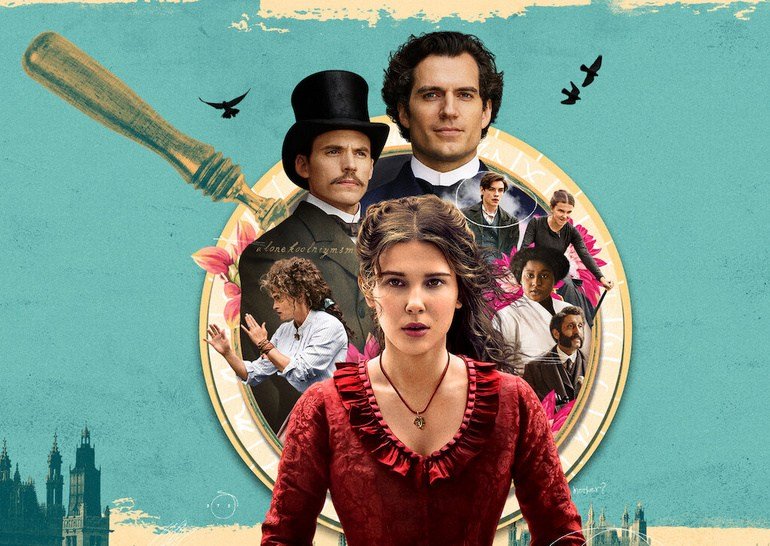 Enola Holmes is an adaptation of the first book in a series of novels about the younger sister of the legendary Sherlock Holmes, written by the American writer Nancy Springer, specializing in the so-called young adult literature – literature for teenagers 12-18 years old, usually light science fiction and detective stories. Actually, novels about boys and girls detectives were popular in all countries of the world, including the USSR, but this genre was especially widespread in Great Britain and the USA. Consider only the series about Nancy Drew, published since 1930 and including more than 220 books (!!!), the last of which were published in the summer of 2020, and the next two will be on sale in January and March 2021. it’s a franchise so a franchise!

Compared to Nancy Drew (of course, over 90 years this series was written by different authors), the series about Enola Holmes includes only six novels, the last of which was published in 2010 and tells about the reconciliation of the older and younger Holmes and the return of the prodigal sister into the bosom of the family. Yes, according to the plot of the series, Enola Holmes, who is 20 years younger than her brothers, does not get along very well with them, and when the girl’s mother suddenly disappears, young Enola refuses to accept the fate prepared for her by her older brothers. According to British laws of the 19th and early 20th centuries, until the age of 21, an unmarried girl remains in the care of the eldest man of the family, in this case Mycroft Holmes, and only he can make all decisions for her. Enola runs away from home and throughout all six books runs away from the brothers, including from the famous detective, along the way solving detective puzzles, breaking codes and looking for kidnapped people.

YOU CAN ALSO READ:  Review of the documentary series High Score / "High score"

In the adaptation from Legendary Pictures / Netflix, the authors decided to modify this plot somewhat. While the overall plot of the film follows the events of The Case of the Missing Marquess (2006), it is quite different. Yes, most of the film Enola is hiding from Mycroft, who is trying to send her to a school for girls from noble families, but the girl still finds a common language with the same Sherlock. And although, according to the law, the younger brother has no right to interfere in her fate, he helps her.

In this regard, the image of Sherlock Holmes in Enola Holmes is interesting. Unlike the somewhat prim and arrogant sociopath we are used to, the character of Henry “The Witcher” Cavill is more human and emotional. He cares about his sister, is somewhat sentimental and sometimes even allows himself to joke and smile. You know, I would also watch a separate film about Holmes with Henry Cavill. And you don’t need to tell me that this is “not canon.” On June 23, 2020, The Estate of Sir Arthur Conan Doyle, the organization responsible for licensing Holmes’ image and protecting the property rights of the descendants of Arthur Conan Doyle, filed a lawsuit against Legendary Pictures, Netflix and Nancy Springer personally, as the rights to a more emotional and human Holmes, described in Doyle’s last ten stories, published between 1923 and 1927, have not yet gone into the public domain. So the emotional Holmes is quite canonical.

YOU CAN ALSO READ:  Review of the film "The Devil All the Time"

But back to Enola Holmes. Actually, I have nothing against the literary pastiche, among such works I come across not just good, but sometimes even more interesting than the originals, works, for example … Kotlyarevsky’s Aeneid. And maybe, as teenage detectives, Nancy Springer’s novels are really good, it’s not for nothing that they were nominated twice for them. Edgar Allan Poe. But … they are too teenage and predictable. The plot develops exactly as you expect it, detective riddles look somewhat far-fetched and sometimes even silly. Yes, it is not easy to spot the culprit here, but rather because his motive is … strange, and the author made the attacker exactly who you think of last. The trick is old, but here, to our surprise, it works.

Enola Holmes is a beautiful film. There are excellent scenery of Victorian England, chic costumes, good dialogues, high-quality camera work. Well, yes, there are really good actors in the film. The same Millie Bobby Brown has already proven her worth as an actress, and the role of a young independent woman trying to prove her right to be who she wants in a society where women are limited in everything suits her very much. The film also paints the participation of other stars: the already mentioned Henry “Superman” Cavill (Sherlock Holmes) with his open smile, so unusual on Holmes’s face; Sam Claflin (Mycroft Holmes), whom you may have seen in the film series The Hunger Games and the TV series Peaky Blinders; and, of course, Helen Bonham Carter, who played their mother.

The novels about Enola Holmes, written in 2006–2010, are primarily aimed at adolescent girls, naturally, they have feminist motives from the very beginning. For the film, they decided to strengthen them, placing the struggle of the suffragists at the center of the plot. Yes, this is an important historical context for Great Britain at the end of the 19th century, but in some episodes it looks too far-fetched, and the behavior of some of the film’s heroines is a clear anachronism. However, there are enough anachronisms here. Although Enola Holmes does not say which bill, which is being heard in Parliament, it is talking about, it clearly implies a bill of universal suffrage. Here are just a limited electoral right appeared in Great Britain in 1918, and full – only in 1928. About the open courses of jujitsu for women in 1904 it is better not to remember at all.

YOU CAN ALSO READ:  The Flash starring Ezra Miller will be based on the Flashpoint Arc with a focus on time travel and the multiverse

Overall, Enola Holmes is not a bad movie. The actors are clearly trying, the cameraman and the decorators have done a decent job. Scriptwriters can hardly be called hack-workers, just this genre has its own canons, which the authors have to follow. This film, although extremely predictable, is beautiful and quite watchable. Yes, it’s worth watching it in English, mostly English actors were filmed in the film, their pronunciation is just wonderful.

And although the budget of Enola Holmes, due to the participation of stars, the use of expensive sets, costumes and graphics, should be rather big (Netflix traditionally does not report numbers), the film will most likely find its audience and we will see the sequel. And not just one. Well, it’s still better than Twilight, Divergent or The Maze Runner. However, the first parts of the named series also did not foreshadow the nightmare into which the sequels rolled.

Cons: The plot development is quite traditional for a teenage detective; enhanced feminist emphasis; some anachronisms

Conclusion: The film is drawn by the actors and the scenery, but otherwise it is a fairly predictable teenage detective