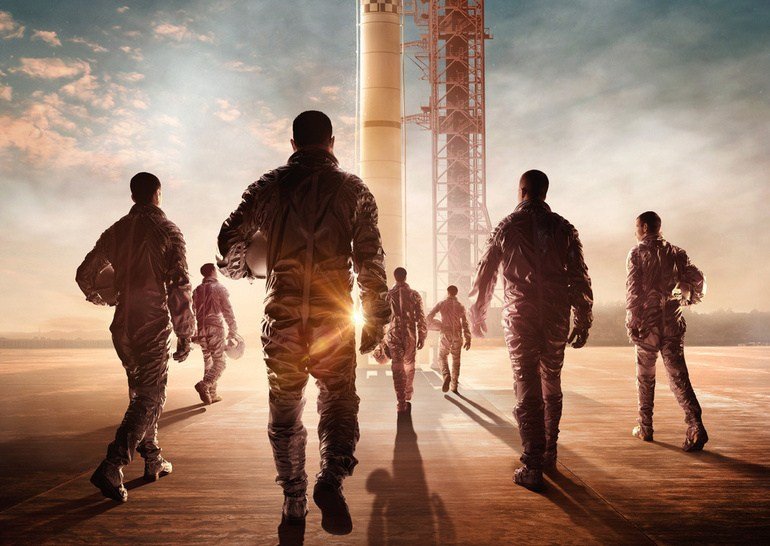 Review of the biographical series about the conquerors of space: The Right Stuff

In December 2016, America said goodbye to John Glenn, who died in his 95th year of life, the last of the astronauts of the Mercury Seven group, recruited in 1959. It said goodbye with honors and a sense of sincere regret, which not all US presidents have received. Disney + / National Geographic’s The Right Stuff follows John Glenn and the other pilots in the first set, the space race, and astronauts’ families.

The Right Stuff series is the second film adaptation of a documentary book by journalist Tom Wolfe, one of the most successful and recognizable American authors of the end of the last century, a pioneer of the new journalism direction in literature. Wolfe spent seven years collecting material for this piece, talking with test pilots, astronauts, and their families. The result is a work researching the psychology of pilots and astronauts, trying to understand what drives them to take incredible risks. The book was nominated for the National Book Critics Circle Award and won the National Book Award for Nonfiction.

In 1983 “Guys What You Need” (another translation of the title of the novel – “Battle for Space”) was filmed… Director Philip Kaufman directed the monumental three-hour film, which failed miserably at the box office, but was very warmly received by critics and was nominated for eight Oscars, four of which he received. We recommend that you watch this tape whenever possible. The television adaptation from Disney + / National Geographic turned out to be completely different in tone.

YOU CAN ALSO READ:  Review of the film "Waiting for the Barbarians"

First, the TV version, which is twice the length of the 1983 film in total timing, focuses more on the rivalry between astronauts and their families’ relationships. It’s not bad, just the film’s accents were different, although this part was also present. The series’s main theme is the rivalry between the very correct and positive John Glenn and the windy and selfish Alan Shepard. Each of them wants to become the first person in space, and each believes that he deserves it more than others. They are ready for almost anything to be the first to go beyond the earth’s atmosphere.

Secondly, and this is already worse, a large layer of the book presented in the 1983 film adaptation is simply absent from the TV version. This is the test pilot part. And this is a shame, because one of the main characters who inspired Tom Wolfe to create this work was just Charles Yeager, the man who first broke the sound barrier, according to many the best pilot of his generation, who for some unknown reason was not selected to the astronaut corps.

There are also some complaints about how famous historical figures are shown in the series. Of course, we understand that the Americans only recently learned that Wernher von Braun was a Nazi, but this is not at all a reason to show him as an eternally drunk insolent. The same can be said about the excessive whitening of the image of John Glenn, do not forget that the blame for the fact that the American women entered space so late lies precisely with him, and not with Gordon Cooper, as shown in the series. And although John Glenn later apologized for his words and even helped the female astronauts, his statement at the congressional hearing ended the Mercury 13 / Mercury 13 program.

Do not assume that all of the above makes The Right Stuff / “The Right Stuff” series unsuccessful. This is more of a grumble from a space fan than serious claims. The atmosphere of the 60s, the mood of the space race, the main historical events are shown in the series with complete reliability, like many personal qualities of members of the first seven and the difficulties in their families.

An interesting feature of the new The Right Stuff is that it looks like a prequel to For All Mankind from Apple TV +. It is unlikely that Disney + planned to play along with competitors, but it just so happened. The fact is that many characters: Wernher von Braun, Dick Slayton, the same Cooper couple (in For All Mankind, these are the Stevensons’ husband and wife), or Jerry Cobb are in both series. And the point of divergence of the stories is precisely creating a female squad, which is discussed in The Right Stuff and implemented in For All Mankind. An additional connection between the series is actor Eric Ladin, who plays the same role in both, albeit two different people. At The Right Stuff, he is Flight Director Chris Kraft, and For All Mankind is Flight Director Gene Krantz. Both are real historical characters.

YOU CAN ALSO READ:  Bond Film Producers Considered Selling 'No Time to Die' to streaming services for $ 600 million

And even though we have certain complaints about the series, such as how the last episodes are drawn out or the fact that some of the Mercury Seven astronauts have almost no screen time, it’s still a good series about space and astronauts. About those who wanted to be the first.

Pros: The history of the first US astronaut corps and the early years of the space race; emphasis on team rivalry and astronauts’ relationships with families; perfectly recreated style of the 60s. last century; interesting intersections with For All Mankind

Minuses: Not all members of the Mercury Seven have received the attention they deserve; the way some historical characters are depicted raises certain questions; the last episodes seem to be unnecessarily prolonged; the part concerning test pilots is simply missing

Conclusion: A good series about the start of the space race and the people who began the conquest of space, although it did not manage to surpass the 1983 film adaptation