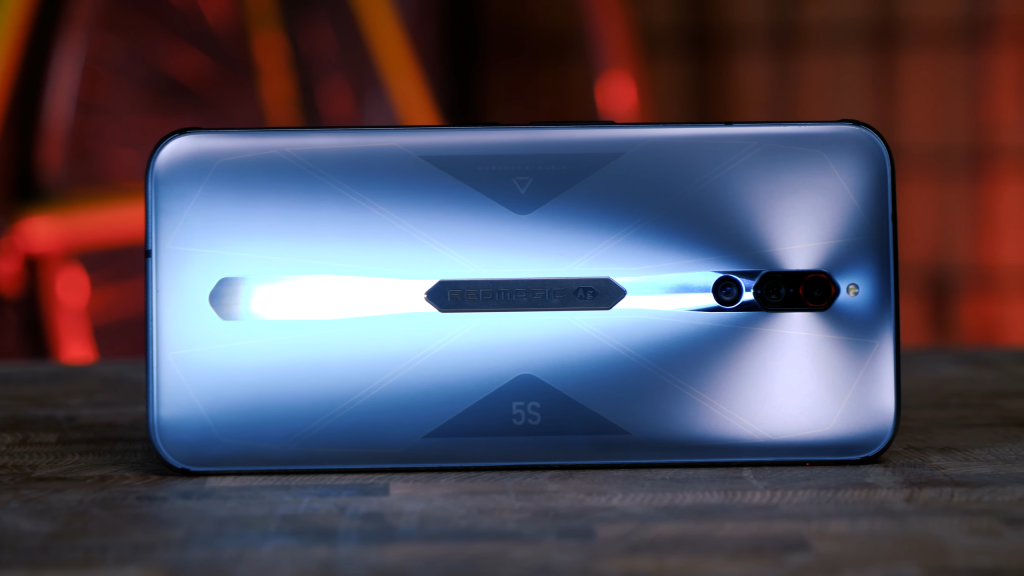 In a world where a $700 Pixel 5 with average specs is now considered an inexpensive smartphone and some smartphones for $ 100 or more have 60Hz screens, today’s smartphone is literally surprising. 144 Hz AMOLED display, Snapdragon 865, top-end memory, operational and main, luxurious body materials, stereo sound, 5G, and all this is cheaper than the fifth pixel … Interesting?

The smartphone’s assembly is perfect: the control keys and the game mode control slider move perfectly and do not wobble at all. Simultaneously, it is not very convenient that the lock button is located below the center of the device. The device itself is made of glass with an aluminum frame. Some of the main features of Red Magic 5S, which you will immediately notice, are touch triggers for controlling in games and two cooling system grilles on the sides (through one there is an intake of air, through the other – blowing out).

The AMOLED display diagonal is 6.65 ″, the resolution is 1080 × 2340 pixels, the refresh rate is 144 Hz, and the sensor polling rate is 300 Hz for the gameplay. It really matters. The screen leaves a pleasant impression. There is support for the Always-on Display mode, which offers many settings.

The Red Magic 5S is equipped with stereo speakers that give out pretty good sound and a 3.5mm jack, which allows you to connect a wired headset and have less latency in games. There is an NFC module (payment via Google Pay works), Wi-Fi 6, Bluetooth 5.1, GPS, two slots for SIM cards.

As mentioned above, the smartphone is equipped with top-end hardware. A Snapdragon 865 with Adreno 650 graphics is used as a hardware platform. And to cool it, a real cooling cooler is used here, which rotates at a frequency of up to 15,000 rpm. Its operation can be configured in the smartphone settings, as well as in the Game Launcher.

I think it’s pretty obvious that the Red Magic 5S is at the top by results in synthetic tests. But it is much more important how he shows himself in real gameplay. I installed top games and turned on the proprietary Game Launcher (a separate physical switch to launch it). In it, you can add games and customize them for yourself. Here you can block notifications, calls, adjust a comfortable brightness for the game, turn on screen recording, see the processor frequency, turn on or off the cooler, adjust the screen refresh rate, and, what was most important for me, set up triggers to work in each game!

For example, in World of Tanks, I set myself a sniper and a shot for triggers, and in Genshin Impact – a shield and a blow. You specify which trigger will activate a specific zone on the screen, and thus both zones and triggers remain active. Most importantly, game developer support is not required. On the other hand, it is possible to track that the player uses triggers because they constantly click on the same area on the screen, which a person cannot do. But they only work when game mode is on.

A smartphone is enough to play World of Tanks with a frame rate of more than 100, even when recording a screencast with the built-in game launcher! And this is an excellent indicator. Moreover, I spent several hours behind him, and yes, subsidence happened, but only on charging and after a large amount of time. The iPhone still does better, but I haven’t seen a better result among Android smartphones. Don’t forget that the iPhone doesn’t have a 144Hz screen, so it’s hard to compare.

YOU CAN ALSO READ:  LG Rollable smartphone with retractable screen is completely declassified

If you turn off the game mode and the cooler, in World of Tanks, the frame rate drops somewhere to 90-100. If you turn it back on, it increases to 120 fps. Therefore, in Red Magic 5S, the game mode is handy, and it is worth activating it during games.

What else is worth praising the device is for the presence of fast RAM and built-in memory such as LPDDR5 and UFS 3.1, respectively. There is no microSD slot.

The camera in the Red Magic 5S is bigger for the show. There are three modules installed on the rear panel: 64 MP + 8 MP shirk + 2 MP macro. There is support for recording 8K videos at 15 fps. But the quality of shooting, both video, and the photo is at a mediocre level, so from the camera’s point of view, this smartphone should not be considered. The front camera has a resolution of 8 MP.

The software is pretty weak. Nothing jerky, and thanks for that, but the localization is not complete. Moreover, some functions themselves do not understand what they want. For example, when you first turn on the smartphone, it prompts you to register a fingerprint, and the scanner, in its opinion, is located at the back. But it is under the screen and works, by the way, not in the best way. On the other hand, I am glad that there is nothing superfluous out of the smartphone box. Everything is like in a naked android if we talk about applications. This is the essence of RedMagic OS – it is an empty drum for the gamer. Like a naked smartphone, install yourself what you need, but there is everything for the game. I don’t think the software will be the strong point of the device, and you will receive many updates. You just need to be ready for this.

Autonomy is very relative here. The fact is that most often, you will have to play on the charge because the cooler, 144 Hz, the big screen, and the games are not meant for children. And 4500 mAh in two or four hours, depending on the game, fly away. It is not convenient that there is no additional Type-C on the side edge to charge while playing. The wire sticks out from the side, and, given the only correct position of the smartphone in the game due to triggers, this creates discomfort. For example, I have a charger on the left of the bed, and here the connector is on the right. I have to adjust.

You can also note the complete 18W power supply of the minuses, although the smartphone supports 55W charging. Because of this, it takes about an hour and a half to charge fully. Also, there is no moisture protection (quite logical, considering the cooler grilles), and the vibration motor is of inferior quality.

Ultimately, the Nubia Red Magic 5S is a very curious smartphone perfect for mobile gaming enthusiasts. It offers top-end features, interesting trigger solutions and active cooling systems, and a useful gaming mode. And at the same time, the cost of the device is more than competitive. Of course, many compromises will have to be made when buying this smartphone – this is the camera, the lack of moisture protection, the peculiar design, and rather big dimensions, not the most capacious battery.

Write in the comments how you like the Nubia Red Magic 5S. Do you think triggers are cheating or not? And can a game, like World of Tanks, be banned for this?