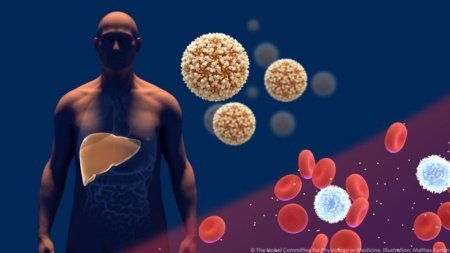 On October 5, Stockholm announced the names of the first 2020 Nobel Prize winners. Traditionally, the “Nobel week” is opened by the prize in physiology and medicine. Live broadcast of the announcement of the winners was conducted on the Nobel Committee’s YouTube channel, and on the site already published press release – this time the award went to Harvey Olter, Michael Houghton and Charles Rice for their discovery of the hepatitis C virus.

how notes N + 1, viral hepatitis exists in two main forms. One of them is caused by the hepatitis A virus, which is transmitted primarily through food and water. Another, much more serious, is caused by two other viruses, hepatitis B and C, which are transmitted with blood.

According to the WHO, today around the world 71 million people live with chronic hepatitis C. This disease not only causes inflammation and impairs liver function, but is also the main cause of liver cancer. In 2016, nearly 400,000 people died from the effects of hepatitis C virus infection (mainly from cirrhosis or liver cancer). However, antiviral drugs, if taken on time, could prevent 95 percent of these deaths. Their discovery was made possible thanks to the work of this year’s Nobel laureates. Their research has led to the fact that the hepatitis C virus has not only ceased to be an unknown culprit of a dangerous disease, but is – according to the Nobel Committee – on the right (albeit, perhaps, a long) path to destruction.

YOU CAN ALSO READ:  IPhone 12 owners complain about loss of connection in 4G and 5G networks, Apple is investigating the situation

Olter made his first discovery in this area back in 1975, then in 1989 Houghton managed to clone the virus, and in 1997 Rice proved its direct pathogenicity. It took the Nobel committee over 20 years to appreciate the significance of their work.

BREAKING NEWS:
The 2020 #NobelPrize in Physiology or Medicine has been awarded jointly to Harvey J. Alter, Michael Houghton and Charles M. Rice “for the discovery of Hepatitis C virus.” pic.twitter.com/MDHPmbiFmS

In 2019, William Kelin, Peter Ratcliffe and Gregg Semenza became Nobel laureates in medicine and physiology for their study of cell adaptation to lack of oxygen, in 2018 the award was presented to James Ellison (USA) and Tasuku Honjo (Japan) for research in the field of cancer therapy by activating the immune response. In 2017, Jeffrey Hall, Michael Rosbash and Michael Young became laureates for the discovery of the molecular mechanisms that underlie the work of the biological clock, and in 2016 the Japanese biologist Yoshinori Osumi received the award for researching the mechanisms of autophagy (“self-eating”) – the process of destruction of components cells inside it.