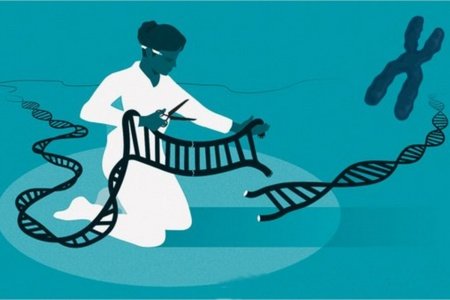 Jennifer Doudna and Emmanuelle Charpentier are awarded the Nobel Prize in Chemistry in 2020. The prize was awarded to them for the development of a method for editing genomes. The announcement of the laureates could be followed live broadcast on the Nobel Committee’s YouTube channel, you can learn more about the work of scientists read on the website of the award.

Emmanuelle Charpentier and Jennifer Doudna are the creators of one of the most advanced genetic engineering tools – the so-called “molecular scissors” CRISPR / Cas9. A lot of materials are devoted to various achievements related to CRISPR / Cas9 on our website. As is known, CRISPR / Cas9 embryonic genomic editing technologies have great potential. With their help, you can find the desired gene in the DNA of a living organism and remove or correct it. This technology has revolutionized the life sciences and continues to develop new therapies for cancer and is expected to ultimately treat inherited diseases that are now considered incurable.

BREAKING NEWS:
The 2020 #NobelPrize in Chemistry has been awarded to Emmanuelle Charpentier and Jennifer A. Doudna “for the development of a method for genome editing.” pic.twitter.com/CrsnEuSwGD

“This is an incredibly powerful genetic tool that touches everyone. Its creation not only revolutionized basic science, but also led to the emergence of innovative cultures, and also promises the emergence of revolutionary treatments. ”

Claes Gustafsson, Chairman of the Nobel Committee for Chemistry.

As is often the case in science, these molecular scissors were created by accident. In a study of Streptococcus pyogenic, one of the bacteria most damaging to humanity, Emmanuelle Charpentier discovered a previously unknown molecule, tracrRNA. Her work showed that tracrRNA is part of the oldest immune system in bacteria, CRISPR / Cas, which disarms viruses by breaking down their DNA.

In their natural form, the CRISPR / Cas9 genetic scissors recognize DNA from viruses, but Emmanuelle Charpentier and Jennifer Doudna – awarded this year’s #NobelPrize in Chemistry – proved that they could be controlled so that they can cut any DNA molecule at a predetermined site. pic.twitter.com/zlOfyENt8V

Charpentier published her discovery in 2011. In the same year, she began collaborating with Jennifer Doudna, an accomplished biochemist with extensive knowledge of RNA. Together, they managed to recreate the molecular scissors of bacteria in a test tube and simplify the molecular components of the mechanism, making them easier to use. Then they reprogrammed the genetic scissors. In the classical form, scissors recognize the DNA of viruses, but Charpentier and Doudna proved that they can be controlled and, if necessary, used to cut any DNA molecule in a specific place. Where DNA is cut, the genetic code can be easily rewritten. CRISPR / Cas9 was not the first genome editing system, but it surpassed all previous ones in terms of accuracy and availability.

Since the creation of the CRISPR / Cas9 method in 2012, this technology has led to many important discoveries in basic research – for example, botanists have been able to develop crops that are resistant to mold, pests and drought. New cancer treatments are undergoing clinical trials in medicine, and in the long term, hereditary diseases are expected to be curable.

In 2019, the Nobel Prize in Chemistry was awarded to John Goodenough, Stanley Whittingham and Akira Yoshino for their lithium-ion batteries.

The 2018 Chemistry Prize went to Francis Arnold for “Directed Enzyme Evolution” and George Smith and Gregory Winter for “Phage Display of Peptides and Antibodies.”

In 2017, Jacques Dubochet, Joachim Frank and Richard Henderson received the Nobel Prize in Chemistry for “the development of cryoelectron microscopy to determine the structure of biomolecules with high resolution in solution.”

YOU CAN ALSO READ:  Laptops with foldable screens will be very expensive
0