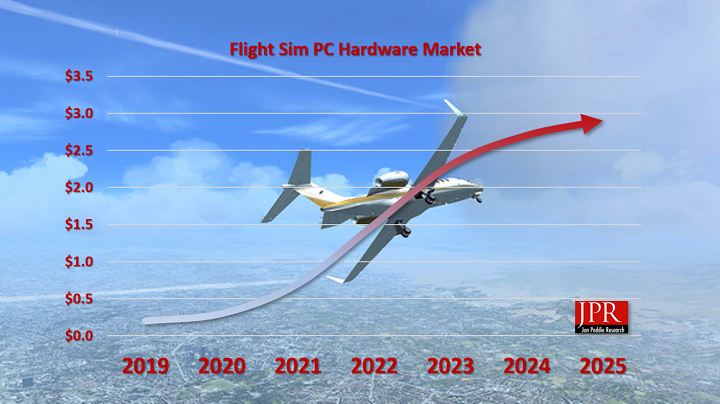 Microsoft Flight Simulator will “force” gamers to spend over $ 2.5 billion on hardware and accessories

The new Microsoft Flight Simulator has already been nicknamed the first nextgen – the game’s graphics are so good in a number of aspects. However, good graphics are conditionally impossible without productive hardware, and in the case of a flight simulator, everything is complicated by the specifics of the game.

The minimum system requirements for Microsoft Flight Simulator include Core i5-4460 and Ryzen 3 1200 processors and GeForce GTX 770 and Radeon RX 570 graphics cards, and to play at maximum settings, you will need a Ryzen 7 2700X or Core i7-9800X-level CPU and a graphics card like Radeon VII or GeForce RTX 2080. In addition, you have to get a fair amount of RAM.

Analysts at Jon Peddie Research have estimated that in the first three years of the game’s sales, gamers will spend about $ 2.6 billion on hardware and accessories! The cost of the game itself is not taken into account in this case. The money will be spent on upgrading the PC or purchasing a new one (Sasha Lyapota will not let him lie), as well as on various accessories, including joysticks, armchairs, and more.

YOU CAN ALSO READ:  It looks like the Radeon RX 6700 (XT) graphics cards will not go on sale until March

Analysts in their calculations are based on a forecast, probably by Microsoft itself, regarding sales of around 2.27 million copies of the game over the next three years. That is, on average, each gamer will spend about $ 1140, although here, of course, everything will be very individual.

Of course, this does not compare with donating to any top mobile games or projects like Call of Duty, but here is a completely different situation. I remember Half-Life: Alyx, after the announcement of which gamers bought a huge number of VR headsets.

In general, a very curious and unusual mathematics, once again showing the uniqueness of the new Microsoft game.