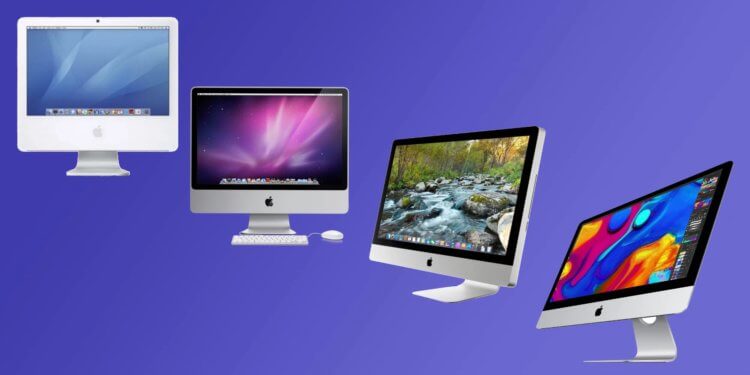 Isn’t it time for Apple to finally redesign the iMac?

It was rumored this week that Apple would continue to migrate Macs to its own chips in 2021, does it mean redesign the iMac? Moreover, the company has set itself an ambitious goal: to update ALL computers on ARM and release one or two more Macs on Intel by the end of the year. I don’t think she can do it, but Apple needs to update the Mac Pro, 16-inch MacBook Pro, iMac Pro (possibly), and iMac.

Although who knows what they are up to in Cupertino. But if it comes with the same update as the MacBook Pro, MacBook Air, and Mac mini on the M1 in 2020, it’s unlikely to be greeted with much joy. At least this will affect the iMac.

The iMac design hasn’t changed much in 8 years!

Why? Even if Apple adds an M1, M1X, or M2 chip to its computer (possible names for the next generations of Apple chips) but retains the previous iMac design, it will be a fiasco…

How the iMac appeared?

Apple first introduced the aluminum iMac in August 2007, making it in 20-inch and 24-inch versions. This was a major upgrade from the previous plastic iMac, which was available in 17-, 20- and 24-inch screens between August 2004 and August 2007.

YOU CAN ALSO READ:  Robotic Animals Created in Different Countries

Now, this iMac seems to be just a toy.

Three years passed between the release of the first plastic iMac G5 and the aluminum iMac in 2007 – a pretty short time frame for a major Mac upgrade. The mid-2007 iMac was just the beginning, however. Despite the aluminum front panel, it still had a black plastic back that spoiled the whole look.

In 2009, Apple revised its iMac lineup with a new aluminum unibody chassis. A new iMac came out, available in 21.5-inch and 27-inch variants, which are still in use today. This design ultimately shaped the iMac’s future, and Apple focused on redesigning it rather than completely redesigning it.

This was the iMac everyone was waiting for.

In October 2012, Apple redesigned the iMac again, making it ultra-thin and removing the drive (three years again!). But while the thinnest part of the iMac is only 5mm, there is still an unsightly bulge on the back of the house, the iMac’s internal components, and cooling system. In 2015, the iMac received a Retina display.

YOU CAN ALSO READ:  Python displaced Java from second place in the TIOBE programming language ranking

Apple has been using this design since 2012

We are currently witnessing the biggest design lull in iMac history, almost 8 years after the unibody aluminum case was introduced in 2012. That doesn’t mean the iMac is outdated – it’s getting updated with new components, but the design is definitely starting to show its age. And can Apple continue to receive its awards for designs that are actually 10 years old?

So when will Apple finally be able to redesign the iMac? It seems that you cannot think of a more suitable moment than the transition to the ARM architecture.

Of course, it’s ideal for getting something like the Pro Display XDR, just a little thicker, but with the same screen bezels. I’m not sure if this is technically possible. Apple’s last monitor was the Thunderbolt Display, which had a design very similar to the iMac but was slightly sleeker as it did not require a full-fledged computer inside. Perhaps the same principle will remain in the new iMac.

I’m sure that the new iMac 2021 will have much thinner frames around the screen and hopefully a smaller chin… While there is high hope that Apple will bring Face ID to the Mac lineup in some form, there is no hint that such a move is expected this year.

The question also arises whether Apple will use a larger diagonal in its new iMac, as most manufacturers have done. According to rumors, the updated computer can get a diagonal of 31.5 inches and a 6K (!) Display. Not sure if anyone would buy the Pro Display XDR then.

This iMac looks cool too, what do you think?

Hopefully, Apple is going to give maximum attention to the iMac line this year. There is a lot of pressure on the company to keep the same design … I don’t know. I was thinking about buying an iMac in 2020, but as soon as I saw what a Mac on an M1 was capable of, I decided to take my time. And an updated design would be a nice addition to the power. Another question is what will be the price?

Despite its outdated design, the iMac remains popular with casual consumers. However, I personally hope for a redesign of the iMac in 2021 – now is the time.