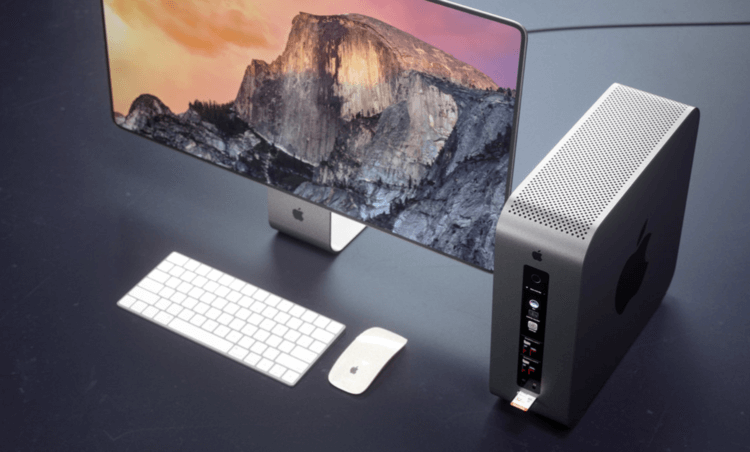 iMac with thin bezels, New monitor, and Mac Pro: What Apple will update in 2021

Early last November, a week before the Mac presentation at Apple Silicon, Bloomberg’s Mark Gurman predicted an unusual and incomprehensible Mac. A Mac Pro, just like the 2019 Mac Pro, but half the size, which will either replace or complement the current Mac Pro. Recently this story was continued. Talking about what awaits desktop Macs in 2021, an insider reported a lot of interesting things: iMac redesign (first since 2012), oh the return of the Thunderbolt display (Apple stopped production in 2016), and the smaller (in size) Mac Pro.

According to Mark Gourmet, in the second half of 2021, for the first time in many years, Apple will focus on resurrecting desktop Macs. For almost a decade, this direction was funded on a leftover basis, which could not but lead to a drop in their sales, which is why they invested even less in them – but now everything will change. Apple’s next ARM processor – apparently Apple M2, according to information from unofficial sources, is intended for desktop computers, and it is he who is most likely to be presented at the opening of WWDC this year.

Apple will introduce new iMacs this year, redesigning them and re-sizing them diagonally for the first time since 2012. The thickness of the frames will decrease, the “beards” from under the screens will be removed (shaved off?), And the back of the case will become completely flat.

YOU CAN ALSO READ:  LG to showcase OLED concept monitor capable of bending and emitting multi-channel audio through screen at CES 2021

If Apple makes an iMac like its monitor, there will be a gun!

There will be two iMac models: the J456 will replace the 21.5-inch, and the J457 will replace the 27-inch. Both new iMacs will be Apple Silicon and will feature the same new M-chip for desktop computers. Since these iMacs have not yet been announced, neither their diagonal dimensions nor other details are reported by Bloomberg.

The question about the type of display in iMac 2021 remains open. Min Chi Ko has promised that one or two iMac models this year will receive mini LED displays. Redesign, Apple Silicon – awesome tech. Perhaps, mini-LEDs would be quite appropriate for them, but how much will they cost in this case?

Many people are waiting for the return of the affordable Apple monitor.

In June 2016, Apple announced that it would no longer develop and manufacture its own monitors. The reasons for this decision are unknown. There are many versions; it seems that Apple did not want to devote resources to updating the Apple Thunderbolt Display, but he desperately needed it – it was released in July 2011 and has not been updated since then. You can also read: M1 is Apple’s first ARM chipset

Apple recommended LG UltraFine displays instead of Apple Thunderbolt Display. Apple engineers were involved in the development of this series of displays. In the text of the decision to stop developing its own displays, there was no word that this is forever. In 2018, Apple announced the next year, 2019, alongside the Mac Pro, a high-end display. Observers doubt that a modern version of the Thunderbolt display will be released this year. According to their information, its development has just begun, and it is still in one of the early stages.

YOU CAN ALSO READ:  Hyundai spun off IONIQ as a separate brand of electric vehicles

Apple will present two Mac Pro models. The first one, which looks the same as the 2019 Mac Pro, will have processors from Intel. Apple’s Intel Xeon-level chips are expected in 2022, so this is possible in this class of Macs. What the essence of the changes is is unknown. The upgrade is possibly significant.

Well, what’s the Mac novelty you’re most looking forward to this year? Tell us in the comments section below.