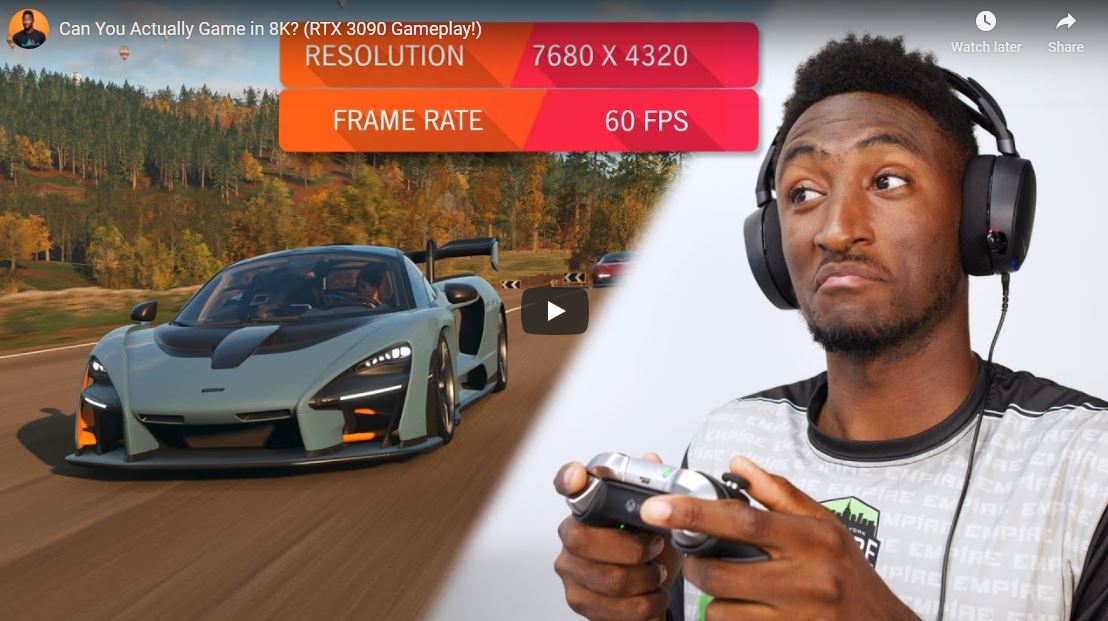 GeForce RTX 3090 tested in games at 8K resolution: It can really provide a comfortable frame rate

We learned yesterday that the GeForce RTX 3090 is the fastest GPU for Ethereum mining. Now it’s time to see how the gaming flagship NVIDIA Ampere performs in games at 8K resolution. Renowned tech bloggers Linus Tech Tips and Marques Brownlee conducted the relevant tests and shared their results.

Announcing the RTX 3090 with 24GB of G6X memory at the September launch, NVIDIA announced support for 8K 60fps gaming for the new flagship.

Both vloggers used an 88-inch LG Signature ZX TV with a resolution of 7680 × 4320 pixels and support for Nvidia G-Sync for tests paired with a system based on Intel Core i9-10900K (10 cores / 20 threads, 3.7 / 5.3 GHz ). And the first tests confirm that the flagship GeForce RTX Ampere is indeed capable of providing a high frame rate at 8K resolution, but there are nuances.

First, Marquez launched Forza Horizon 4 at maximum settings – moving from the splash screen directly to the gameplay, the blogger noted that the level of detail is impressive. With high graphics settings (Ultra profile), the game produced around 42-60 fps.

In the action movie Control from the studio Remedy Entertainment, which supports proprietary RTX tracing and DLSS anti-aliasing technologies, at an output screen resolution of 8K and a rendering resolution of 5K, the frame rate dropped to 20-21 fps. And only when the rendering was reduced to 1440p, the frame rate increased to a comfortable 44-51 fps.

In their video, Linus paid more attention to a detailed study of the new product and comparing it with other models such as the ASUS ROG STRIX 2080 Ti.

The vlogger has tested the RTX 3090 in several games including Doom Eternal, Forza Horizon 4, and Control. But the fps values ​​(upper right corner) are clearly visible only at some moments, while the readings cannot be seen throughout the entire video.