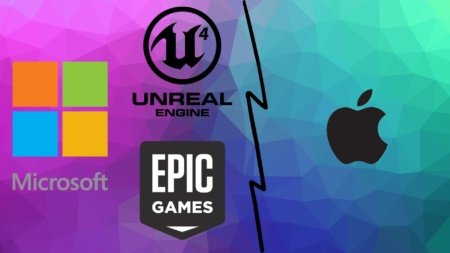 Epic Games has filed another lawsuit against Apple, accusing it of illegal pressure on Unreal Engine. Supported by Microsoft

The conflict between Apple and Epic Games begins to develop into a multi-part film, and we continue to follow the development of this epic.

Epic claims in its latest lawsuit that Apple is threatening the entire ecosystem of game developers. It’s about supporting the proprietary Unreal Engine. Apple has threatened that if Epic refuses to comply with App Store rules, then all developer accounts, including those supporting the Unreal Engine, will be removed from the system.

The new lawsuit was Epic’s response to another attack by Apple. After Epic went to court, asking to ban Apple from removing Fortnite from the App Store and blocking accounts during the trial, the owner of the App Store responded by emphasizing that it ensures compliance with previously stated policies, without denying potential problems in the issue of continuing support for Unreal Engine on iOS platform.

Epic states that the end of support will be unnecessary punishment and will affect developers who have contributed to the development of the Epic engine and are not involved in the conflict.

“The scale of Apple’s retaliation is in itself an illegal effort to maintain its monopoly and thwart any attempts by other companies that dare to oppose Apple.”

“We filed an application today in support of Epic Games’ request to retain its access to the Apple SDK for Unreal Engine. Keeping Epic’s access to the latest Apple technologies will be a fair decision for developers and gamers. ”

In a statement, Microsoft emphasizes that Unreal Engine is a very important engine for many developers around the world, including itself; many of Microsoft’s Xbox and PC games use the Epic engine.

I must say that Microsoft also has a grudge against Apple, and this is not the first time the company has openly criticized App Store policies. Earlier this month, Microsoft directly accused Apple of making it impossible to launch its xCloud streaming game service on iOS.

Recall that on June 16, 2020, the European Commission announced two antitrust investigations against Apple, one of which is a response to last year’s complaint from Spotify due to unfair fees and restrictions on competing services. Shortly thereafter, Microsoft, among others, backed the European Commission’s decision, essentially accusing Apple of restricting competition.