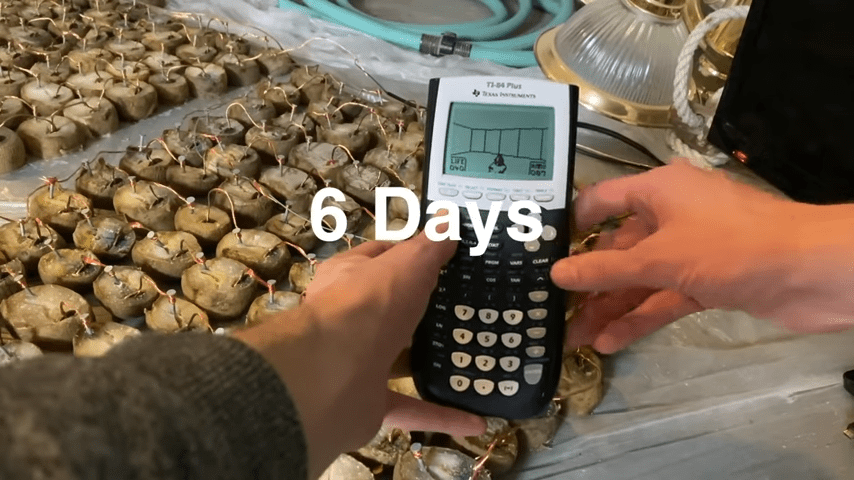 Another unusual experiment to launch the good old Doom shooter on a variety of devices has become more. User Reddit under the nickname ‘onesmallserving’ launched the original TI-84 Plus calculator shooter powered by potatoes. On October 11, the author uploaded a video to YouTube titled “How Many Potatoes Does It Take To Run DOOM?” with shots of creating the system and directly starting the game.

The author of the video said that the implementation of all this took six days. The board was powered by “battery” from about 200 boiled potato tubers, cut into pieces and connected into a single system. To ensure the appropriate electrochemical potential in each piece, he stuck a nail and a coin, connecting everything in one chain.

Initially, the author wanted to run the game on a Raspberry Pi Zero microcomputer, which requires about 150 mAh. But as a result of the possibilities he created The “potato battery” was not enough to fully operate the microcomputer, after which the author decided to use the TI-84 Plus calculator, which requires less power to operate. And he did it. On the video you can see the gameplay directly (moment from 13:10). The author does not recommend anyone to repeat his experience, including because of the unpleasant smell of potatoes – it began to deteriorate before it was possible to combine all the pieces into a single system.

By the way, in May Texas Instruments blocked the ability to run third-party programs on its graphing calculators.

YOU CAN ALSO READ:  Hyundai opens New Horizons Studio to focus on the extraordinary vehicles of the future, including robots and transformers

Running Doom (or Windows 95) is a kind of benchmark for this kind of projects. Previously, the game was launched on an Apple Watch smartwatch, an Apple TV set-top box, a MacBook Pro’s Touch Bar, a 1998 Kodak DC260 camera, and recently a handyman managed to play the legendary 1993 shooter using a pregnancy test screen. Obviously, this is far from the last such experiment.