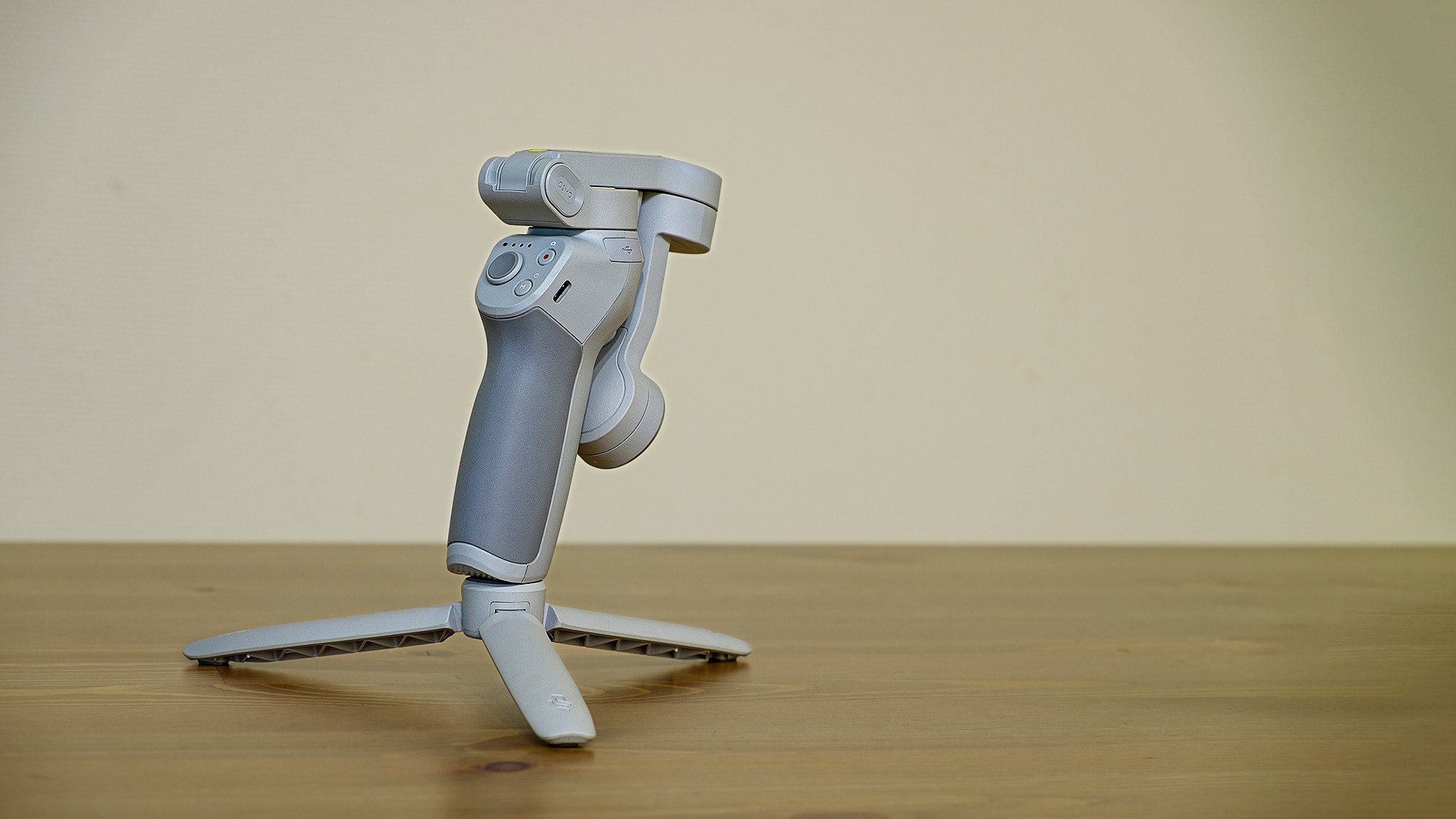 Why buy a separate gimbal for smartphone video shooting in 2020? This question is asked by everyone who is involved in videography in its amateur or semi-professional embodiment. In short, the answer is simple but complex. Firstly, not all smartphones are equipped with an OIS camera. Secondly, the optical stabilizer in the camera can simply reduce the effect of shaking from movement in space, and the stabilizer as a separate device can also smoothly move the smartphone in space, changing the shooting angle. Finally, thanks to the integration of mechanical movement of the lens and software processing, the stabilizer allows you to quickly and easily get effective shots, even for the amateur.

The DJI OM4 is a three-axis foldable compact electromechanical gimbal designed for smartphones. The number 4 in the name means that this is the fourth generation of devices for DJI. In terms of construction, the main difference from previous models is the magnetic mount of the phone. And it’s really great. 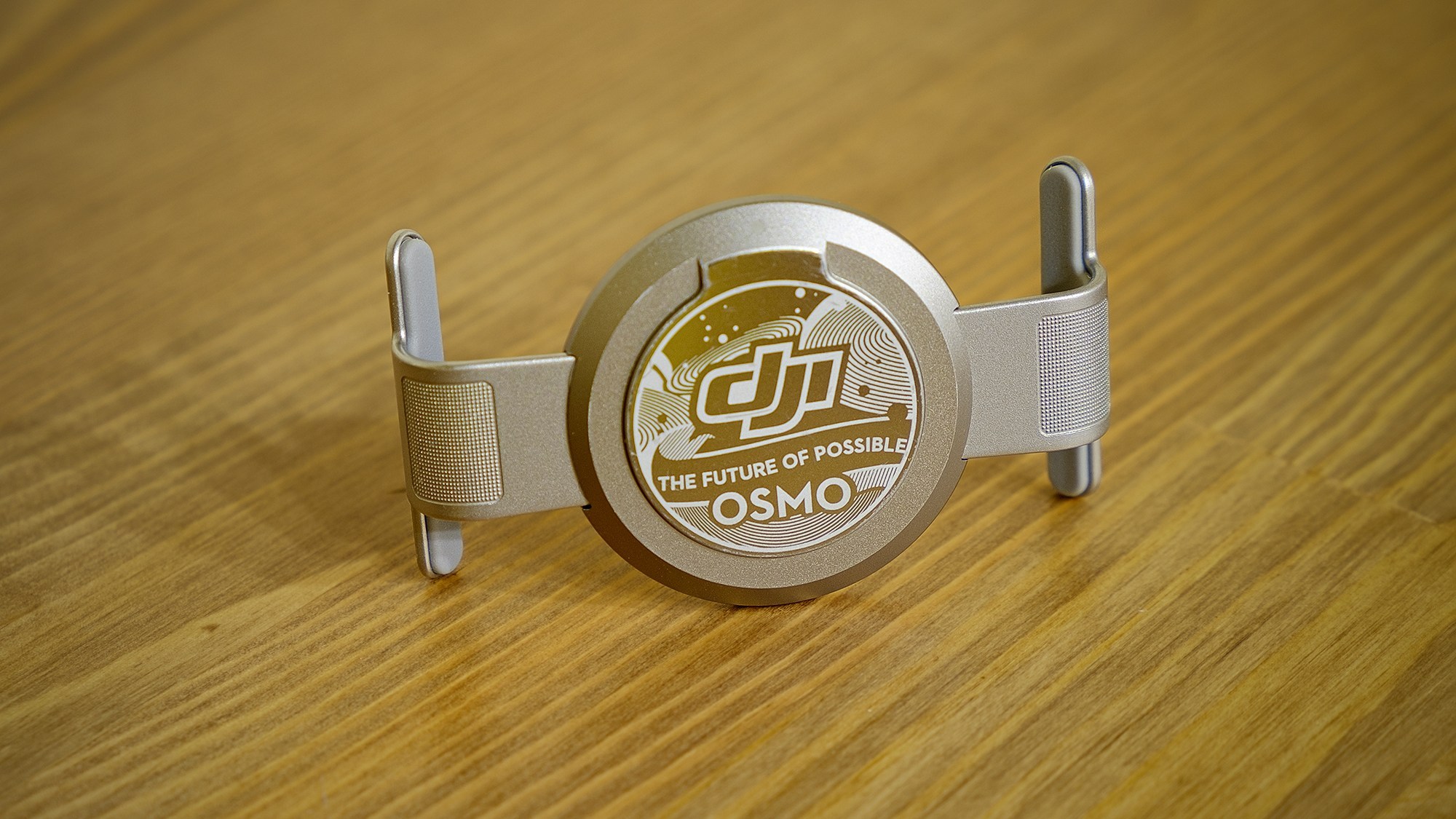 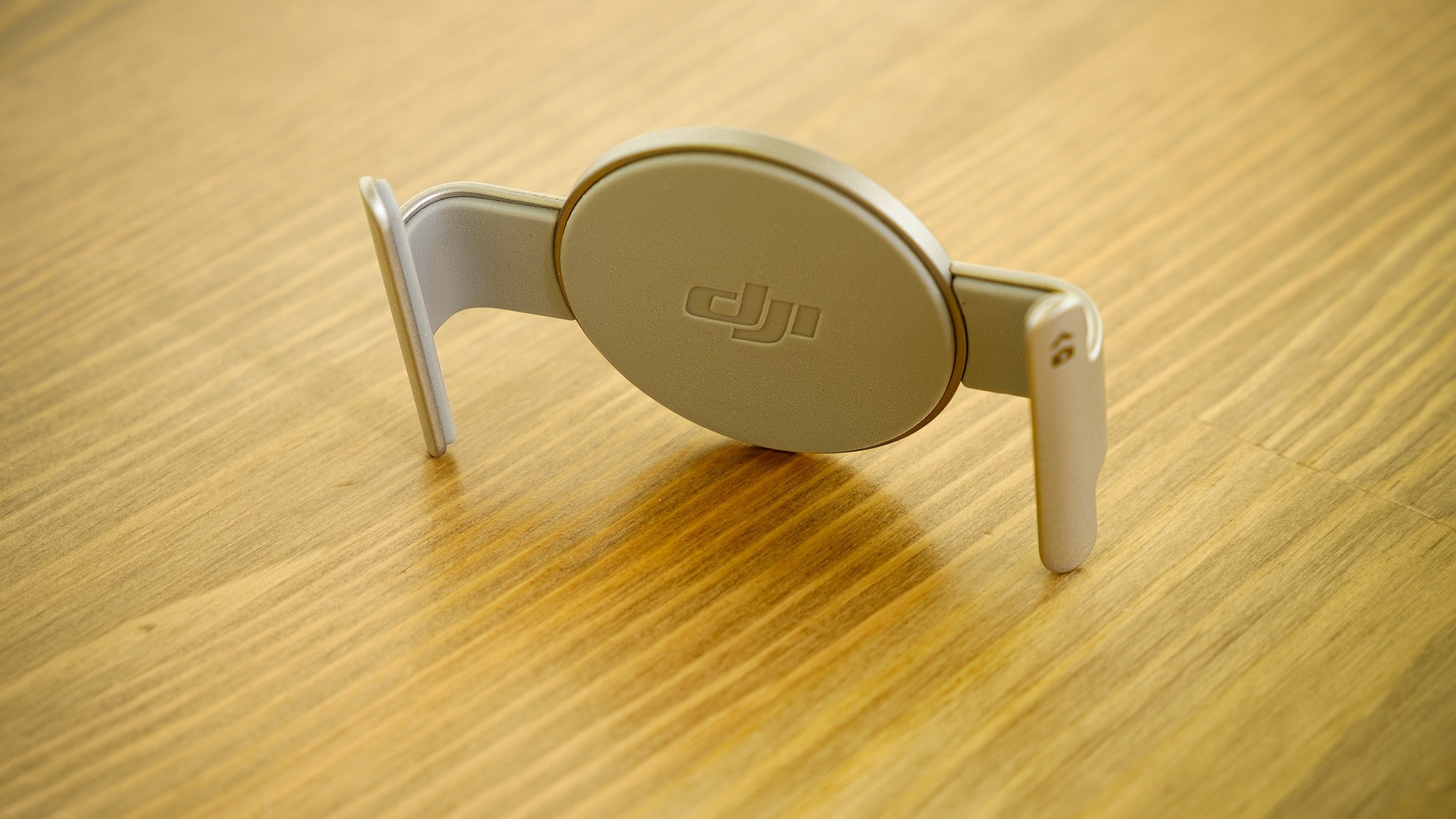 The delivery set includes two mating parts. One with spring-loaded sliding brackets that hold the smartphone body (regardless of the presence of a cover on it), the second is a sticker on the body. Thus, you can comfortably shoot with two smartphones in turn.

The first question that arises after the enthusiasm is “oh, how great!” – how firmly does a smartphone with magnets hold? Reliable. Mini-testing showed that it can withstand a load of up to 5.5 kg for separation, but it is “static”. If you try, you can shake off your smartphone, but during normal filming, such an extreme scenario is unlikely.

Unfortunately, the metal counterpart of the mount interferes with the operation of wireless chargers, the owners of such smartphones are left with the option with brackets, but the folding ring on the finger will be a nice addition for those who decide to charge via wires the old fashioned way. The delivery set includes a template that simplifies the process of gluing to the case (it is better not to use this counterpart of the mount with covers). 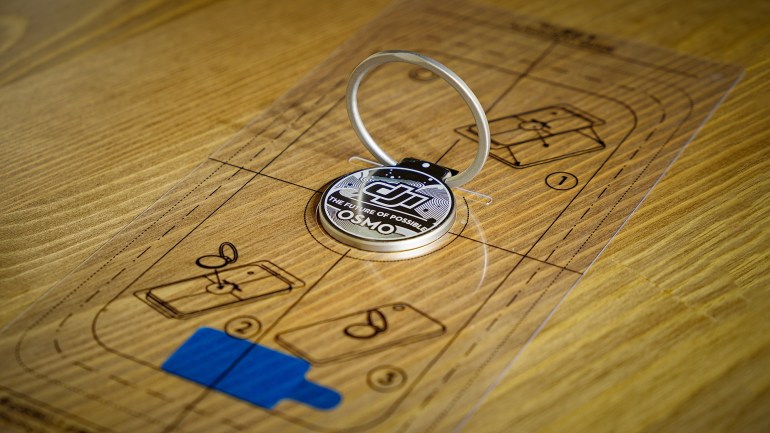 However, a simple installation is fraught with another bonus hidden from the non-professional eye. The point is that any stabilizer must be calibrated. If you install the smartphone “by eye” in the worst case, the quality of work will be lower, in the best – the power consumption will increase. The situation is aggravated by the use of accessories, lenses or external microphones that significantly shift the center of gravity. So, the counterpart of the mount glued to the body of the smartphone eliminates the need to recalibrate literally before each shooting. With the second counterpart, the hitting accuracy will not be ideal, but applying a mark on the case with an indelible marker is as easy as shelling pears and this is enough for correct operation. 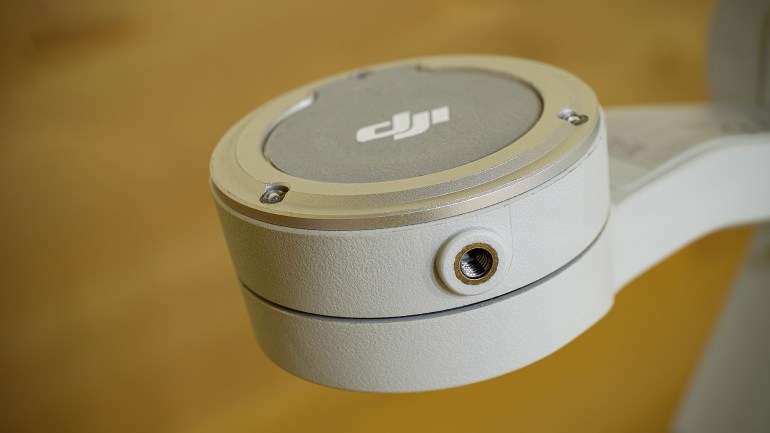 By the way, the third motor has a threaded socket. It is designed to mount counterweights to make it easier to work with smartphones with an offset center of gravity. While there are no such accessories on sale, the stabilizer has recently appeared on the market, so everything is still to come.

In the stowed position, both levers are locked, but the stabilizer can be brought into working condition quickly, literally with one movement.

The body is made of plastic, on the handle there is a large rubberized insert for better grip during work.

All three motors with mechanical steering angle stops. This fact should be taken into account when filming, as not all angles are available. Nevertheless, the stabilizer has three axes, and the desired angle can be easily obtained simply by first turning the handle in space. 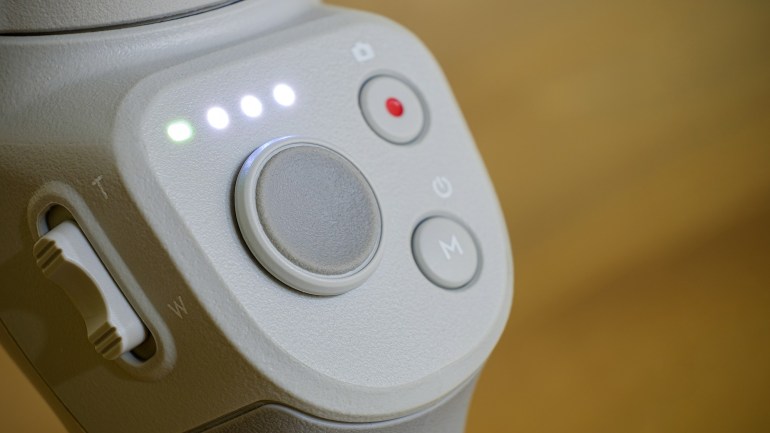 The DJI OM4 has three buttons, a four-way joystick and rocker. A joystick with a reaction speed adjustable through the menu (three options) is responsible for rotating the smartphone along two axes. In the menu, you can choose either up / down / right / left movements, or free style, which allows, with a certain skill, to make diagonal postings.

The power button is multifunctional. A couple of quick taps in turn change the portrait mode (unfortunately, in this firmware version it is the default mode) to landscape mode. Three quick clicks put the gimbal into standby mode and it turns the smartphone so that you can work with it without removing it from the mount. One press in the off state for a while lights up the battery charge indicator, and when it is on, it cyclically changes the mode from photo to video or calls up a quick menu. 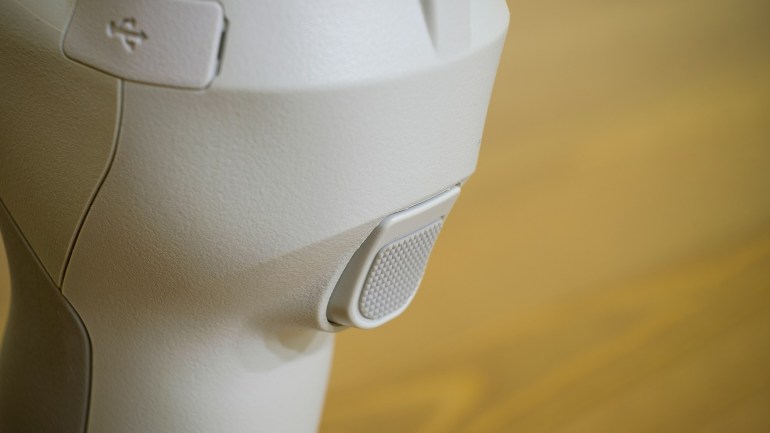 The trigger is also multifunctional, it is responsible for the stabilization modes and is able to switch the application between the front and rear cameras, as well as activate object tracking. 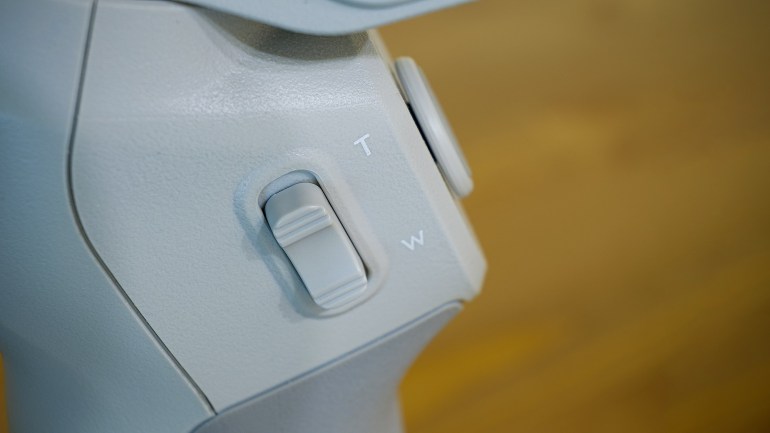 The zoom rocker and record button, for obvious reasons, have only one function.

On the bottom of the handle there is a standard metal tripod socket and holes for attaching a safety rope loop (included in the delivery set). 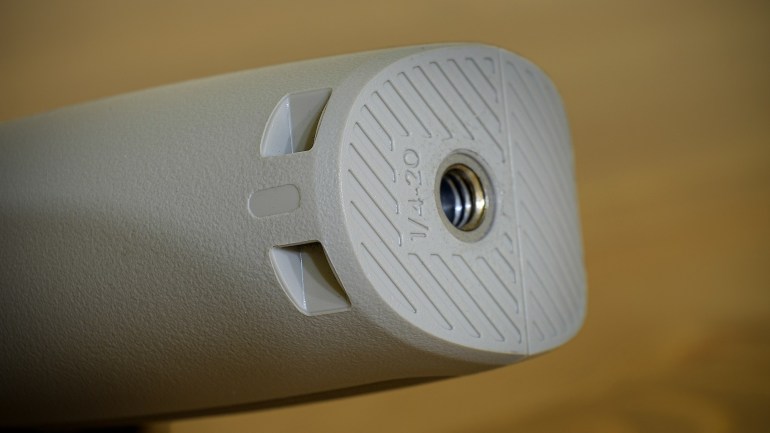 The main task of the DJI OM4 is to stabilize the smartphone camera while moving in space. He copes with her perfectly. Yes, there are incredibly dynamic plots in the movies that are amazing with the smoothness of the camera movement. They were shot by a team of professionals with very expensive equipment, the simplest of which are trolleys on rails and cranes. To expect a similar picture from a smartphone on a handheld gimbal is at least strange. However, OM4 significantly reduces shaking when walking or cycling / scooter. When sports mode is selected, camera movements are accelerated and the picture becomes more dynamic.

To get the most out of DJI OM4, you need to install the free DJI Mimo app. It is this, in addition to stabilization itself, which works when using any camera application on a smartphone at all, that opens up additional creative possibilities. And it is precisely this that can cause complaints from videographers.

In 2020 Full HD at 30fps on many 4K devices? Without manual settings for sensitivity and shutter speed? With a bit rate of 19 Mbps? Without access to a memory card to record videos? Without broadcasting to social networks? They say that there are more possibilities in the iOS application …

Perhaps this is nit-picking. And the device does not belong to the professional class of technology. Maybe. But it’s not about the electronics and stabilization algorithms, but about the application. For example, FiLMiC Pro 6.12 supports gimbal while still providing the camera functionality professionals need.

One of the main advantages of the DJI OM4 is the Active Track 3.0 object tracking mode. It is realized both when the operator is moving and when the stabilizer is mounted on a tripod. In the first use case, the Active Track gives the operator the freedom to move in space, which is especially valuable in rough terrain. In the second scenario, the operator and the “talking head” can easily be the same person, and if you consider that you can turn on the recording with a gesture, the operator is not required at all.

The numbers 3.0 in the name of the mode indicate that this is the third iteration of the algorithms. And development has advanced significantly. The camera is able to follow the subject even if that moment disappears from the field of view, for example, behind a tree. It doesn’t matter for the application whether a person is chosen as an object or a pet or just an object. The main thing is that it is significantly different from the background in color and texture.

DJI Mimo has a couple of interesting time-lapse creative modes. These are Motion Timelapse and Hyperlapse. In the first, the operator selects up to four points, between which the stabilizer slowly and discretely moves the smartphone camera. In the second, shooting takes place in motion, and the stabilizer with Active Track can hold the selected object at the desired point in the frame.

Another creative mode, SpinShot, is suitable for capturing short video clips. The gimbal rotates the camera during shooting, drastically filling the horizon. If interval shooting, provided that the scene is correctly selected, looks good in the portfolio with repeated repetition, then SpinShot is more of a toy, to indulge in leisure hours.

The promising dynamic zoom mode, known as Hitchcock’s vertigo effect, is directly related to zoom, so even with software processing it is still not very high quality, because in the vast majority of smartphones the zoom is digital or software-hardware.

For photography, the DJI OM4 is useful for its automatic shooting and panorama stitching mode. There are three options to choose from – 3×3, 240 ° and humorous character cloning. Compared to shooting with just hands, the gimbal makes it easier to get a high-quality stitching result due to precisely controlled camera movement.

Can I take long exposure handheld photos with the stabilizer? There will be practically no benefit from three motors and algorithms. However, if you install the stabilizer itself on the included mini-tripod or on a clamp, then you will not need to purchase an additional photo tripod.

DJI Mimo has a built-in editor for short video stories with templates. Only one of them is customizable, so it is more suitable for beginners: quickly make a post for a social network, collect friends’ likes and start mastering serious video editing applications.

The manufacturer says that the built-in 2450 mA battery lasts for 15 hours in ideal conditions. In real conditions, this indicator depends on the mass of the smartphone and the accessories used with it, the operator’s activity and the selected settings.

While exploring the capabilities of the DJI OM4, the gimbal showed an enviable survivability, providing several hours of experimentation and a three-segment LED indicator that the power supply was not depleted. 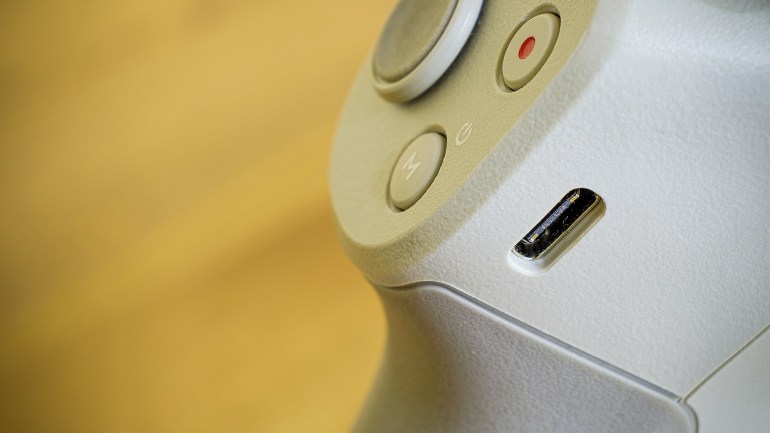 A USB Type C connector is used for charging. If necessary, a power bank is connected to the stabilizer, and then the volume of the internal battery no longer plays any role. 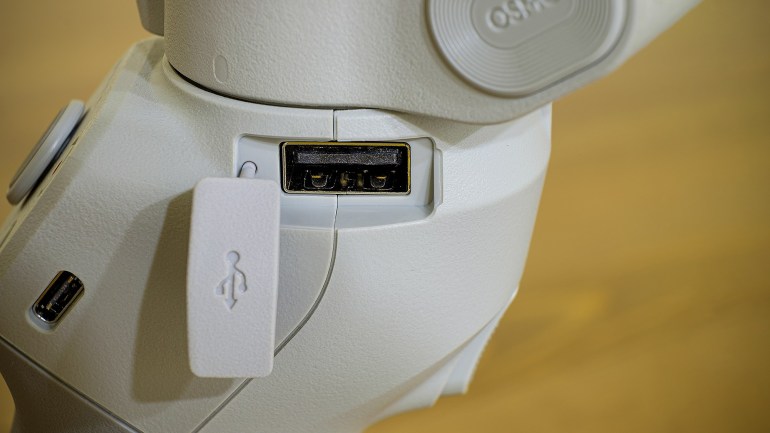 In turn, the stabilizer is capable of performing the function of an external battery for a smartphone – there is a USB Type A socket under the rubber flap. Depending on the location of the connector on the smartphone, its dimensions and cable type, such a scheme can not be used in any position. For example, in my case, in portrait orientation, the cable connector clings to the lower motor. The situation would be corrected by a cable in which the connector is rotated 90 ° relative to the conductors.

Conclusion: The DJI OM4 is not capable of correcting directorial and compositional mistakes for beginners, but it definitely improves the picture. DJI does not hold the undisputed leading position among handheld gimbals as in quadrocopters, but the company’s experience allows it to compete with confidence, offering a functional and stable product with a decent design and reasonable price.