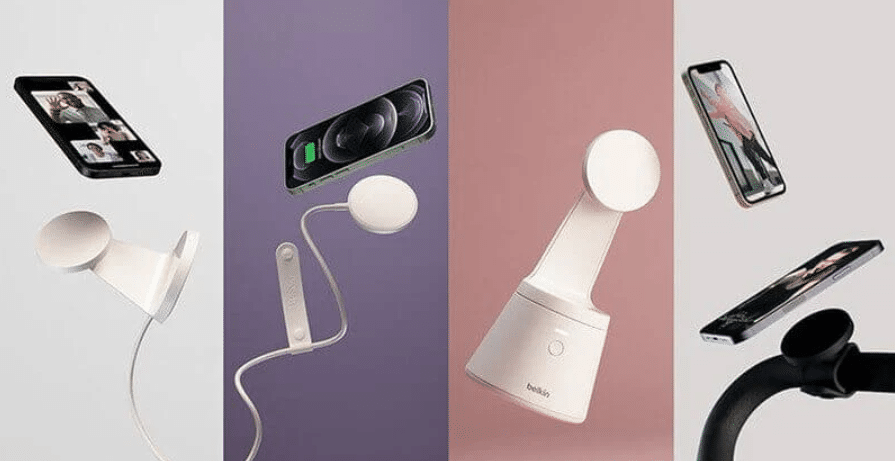 Belkin International has recently added a few new additions to its iPhone 12 accessories list. Quietly, without announcements and announcements. None of the new products not certified in the Apple MFi program (Made for iPod, iPhone, and iPad). MagSafe in them is used only to fix the accessory on the iPhone or iPhone on charging. The charging power of the new products is 7.5 watts, standard for Qi-standard wireless chargers. Apple-certified MagSafe provides the iPhone 12/12 Pro/12 Pro Max with 15 watts and the iPhone 12 mini with 12 watts. This is not the only difference between Belkin’s new devices and the company’s MagSafe accessories. New items are cheaper.

This is the rare case when the event’s circumstances are almost more important than the event itself. Belkin has been one of the few companies loyal to MFi for years (it and Swiss Logitech are the pioneers of Apple’s program). Belkin has been criticized lately for being too high – and it looks like prices have impacted sales. Also, Belkin International is a subsidiary of Foxconn, Apple’s main supplier, which recently announced a decline in its revenues. Maybe I’m exaggerating these factors’ influence and don’t know about something, but somehow everything unexpectedly came together. If Logitech joins the protest, Apple is sure to be in trouble.

YOU CAN ALSO READ:  SpaceX has placed a GPS III-04 satellite into orbit for the US Space Force, the next mission is the first operational flight of Crew Dragon (Crew-1) to the ISS

Can I buy a Chinese wireless charger for iPhone?

Now let’s move on to the event itself.

The charging power of 7.5 watts instead of 15 or 12 for MagSafe devices is terrible, that it has nothing to do with these two new products. One of them, Magnetic Fitness Phone Mount (magnetic fixation of a smartphone for fitness), allows you to attach a magnetic fixture to the simulator or the handlebars of a sports bike, and on it, using magnets built into the iPhone, fix the smartphone itself. This fixer costs $34.99.

Although the accessory’s name does not mention MagSafe and iPhone 12, it is intended only for them. On the manufacturer’s website, in interlinear translation, everything is named by its proper name. Okay, but the question arises: is the iPhone magnetically secured enough? During exercise, sudden and violent efforts will try to pull the smartphone away from the holder. And the strength of the MagSafe magnets built into the iPhone 12 has been deemed insufficient even in quieter conditions, and the next generation of iPhones will increase it. Belkin must have tested it thoroughly, but it is still unsettling.

How to Choose a Wireless Charger for iPhone? Tips and a selection of worthy options in 2021

And yet another smartphone holder, Face Tracking Magnetic Phone Mount (magnetic holder of a smartphone that tracks the face’s position), is a new word in science and technology. Using an app developed by Belkin, the latching pole aligns the attached smartphone to the wearer’s face. You can walk and wave your arms or sing, moving in space. The camera will be directed at the face of the performer or speaker and costs $64.99

Powerbank for iPhone with magnet

Among the new products are two models of external batteries with the official BOOST CHARGE trademark in the name: BOOST CHARGE Magnetic Portable Wireless Charger 2500 and BOOST CHARGE Magnetic Portable Wireless Charger 10K. Magnetic portable wireless chargers. The numbers in the names – external batteries’ capacity, in mAh, 2,500, and 10,000 mAh. There is no need to even talk about the demand for such accessories—Wireless, portable, bigger, and smaller – for $49.99 and $69.99.

YOU CAN ALSO READ:  Apple Warns of Dangers of MagSafe for Medical Devices

The only thing is that since they don’t have MFi, isn’t it easier to save money and order an external battery for iPhone with MagSafe on the same Ali? A review of one such was not so long ago on our website. It costs around $18 and produces 15 watts. It made sense to overpay for Belkin if there were some advantages like Apple certification. Now, why?

It may look cumbersome, but it does its job

BOOST CHARGE Magnetic Portable Wireless Charger Pad 7.5W calls to MagSafe charging from Apple itself. A Belkin product would cost a few bucks less. In the US, excluding taxes and fees, it costs $29.99. The Belkin charger’s disadvantages are obvious – 7.5 watts instead of 15 or 12 watts for the Apple charger. The Belkin charger is heavier and thicker. It looks like a wheel from a toy car (however, this is already a taste). And again, the question: without MFi, does it make sense to overpay?

And why is Belkin better?

The BOOST CHARGE Magnetic Wireless Charger Stand 7,5W is also quite a decent item. $34.99. The same two colors for the buyer’s choice. White and black. But again, 7.5 watts.