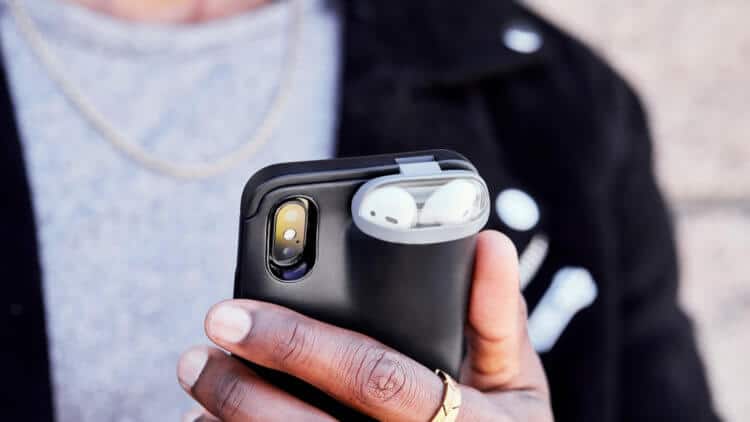 Apple wants AirPods to be able to charge from iPhone

Recently, the concept of ecosystems among Apple users has lost a bit of its value. But for many, this is still an essential aspect that does not allow them to go to competitors. An abundance of universal services, mutual compatibility of most devices and accessories, and much more do their job. However, Apple, as usual, is not enough. Therefore, Cupertino decided on deeper integration of the iPhone and AirPods, making it so that the smartphone can charge the headphones. Even if for this, they have to release a special case.

Apple is actually considering launching an iPhone charging case that would be AirPods compatible. Thus, the company wants to solve two problems at once. The first is to provide headphone users with charging in situations where they don’t have the ability to recharge elsewhere. And the second is to compete with smartphones with reverse charging adequately. Adequate, because, as practice shows, reverse charging is too wasteful and direct, firstly, faster, and, secondly, more economical.

You can also read: Apple is working on a cheaper version of the AirPods Max

Attaching AirPods to iPhone should not interfere with smartphone use.

Very often, AirPods users find that their headphones stop working due to discharging while in use. They cannot carry the charger with them all the time, but they can recharge them from the iPhone in a special case. Its body can include a pair of terminals and a battery, thanks to which energy will be transmitted from the smartphone to the headphones. Thus, the cover becomes not just a protective accessory, but a kind of portable socket, says the patent description.

According to Apple’s idea, the iPhone case should be such that one of its parts can fit AirPods and provide them with charging. It is essential that the headphones are held fairly tightly and do not fall out even on the go because otherwise, it will not be safe. Apple designers are working on several possible mounting options: on top, on the back, in the flip case cover that protects the display, and just on the side using magnets, similar to the Apple Pencil attached to the iPad using magnets.

You can also read: The drawback of AirPods Max: Users have already noticed

At this point, Apple doesn’t seem to want to charge AirPods from the iPhone battery, sacrificing charging. Instead, it is planned to use the battery that is built into the case. The presence of a case will allow you to reliably fix the smartphone case’s accessory and not drain its battery by reverse charging. After all, AirPods clearly require more resources than the Apple Pencil, which can be charged directly from the tablet using a wireless connection. Accordingly, you cannot do without a charging case, which will fit both the iPhone and AirPods.

Apple shouldn’t oversize its iPhone case just because of AirPods.

In general, Apple’s desire to release a universal charging case for smartphones and headphones is a very right thing, especially if the future accessory is compact enough for everyone to want to buy it. After all, if the designers dazzle the second Smart Battery Case, but only in the flip form factor with a thick front cover for inserting AirPods, this thing is unlikely to be very popular. Primarily because of its size. Therefore, Apple will probably need to work out the magnetic mount better so that the headphones hang somewhere on the side or from the end and do not interfere with the use of the iPhone.

But you need to understand that when AirPods are discharged on the, they do not occur very often. Therefore, I personally would not buy a special case for this case. But I would buy a thin case with magnetic fasteners. After all, there is no particular reason to equip it with a capacious battery because AirPods can recharge for several hours of music playback in a matter of minutes. Accordingly, the case will need to be equipped with either a tiny battery or, if Apple can overcome the excessive consumption of reverse charging, do with magnets.