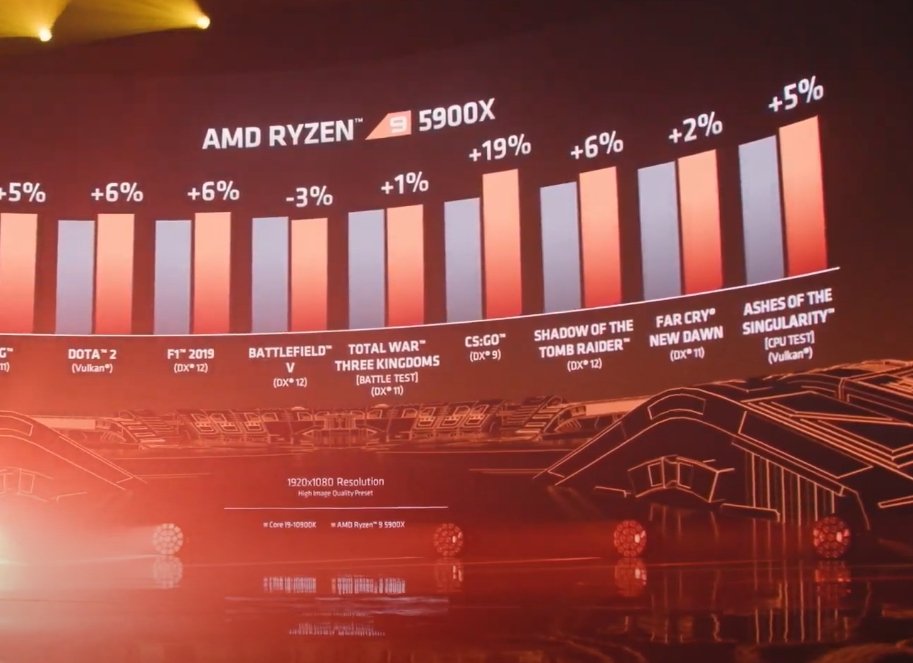 This day came. For more than a year, AMD Ryzen 3000 processors dominated the desktop CPU market (not by sales), and now the company has introduced the Ryzen 5000.

First, do not think that you somehow missed the release of the desktop Ryzen 4000. It’s just that AMD previously had a discrepancy due to which desktop processors of a certain generation lagged behind desktop and mobile APUs in sequence numbers. Now everything is finally brought to a single form.

So, we presented four processors, the parameters of which you can see below.

Core count, TDP and cache have not changed over the Ryzen 3000. Frequencies slightly changed and prices increased by $ 50. Someone might think that a slight increase in frequencies will not do anything, and even raised the prices, but the Ryzen 5000 is based on the new Zen 3 microarchitecture. Compared to Zen 2, it provides an increase in IPC (number of instructions per clock) by 19%. In comparison, Zen 2 versus Zen / Zen + provided 15% gain. Plus AMD has redesigned the processor structure. More specifically, the internal structure of the CCX modules. Each contains eight cores, not divided into clusters, as well as a shared 32 MB L3 cache, which also gives a significant performance boost in certain tasks.

YOU CAN ALSO READ:  Microsoft Flight Simulator will "force" gamers to spend over $ 2.5 billion on hardware and accessories

And primarily in games. AMD devoted most of the presentation specifically to gaming performance. We can say that the company followed Intel’s lead, focusing on a far from the most important segment, but I think AMD deliberately hit the “strongest” place, because you all heard that “if for games, then Intel”, right? According to AMD slides, this is no longer the case.

And although comparing 12-core or 16-core processors in games is such a thing, AMD talks about an increase of 20% or more in some projects relative to the previous generation Ryzen, which is a lot, and is comparable to using a more productive video card.

As for applications, for example, the Ryzen 9 5900X is 24% faster than the Ryzen 9 3900X in the single-threaded Cinebench R20 test, which is very noticeable. Considering the slight difference in frequencies, this is just an excellent example of gain due to the new architecture and changes in the core configuration.

YOU CAN ALSO READ:  Netflix and Ubisoft to shoot an Assassin's Creed series

What’s the bottom line? Ryzen 5000 is when super cool processors got even better, and a competitor got even worse. Should I change any Ryzen 3000 for a similar Ryzen 5000? Most people hardly need this, but for certain tasks such a transition is quite justified. In the case of older CPUs, the gain will be enormous.

What’s Intel? The current Comet Lake initially looked sluggish even against Ryzen 3000, although they were more interesting against the background of their predecessors. Now these CPUs are conventionally useless. But Intel has already promised to release Rocket Lake processors in the first quarter of next year (probably March). They will keep the 14nm process technology and LGA 1200 socket, but get a new architecture. True, there will supposedly be a maximum of 8 cores, and the old technical process will not allow fully disclosing the new architecture, so Intel in any case will either have to squeeze in prices or release a deliberately losing product.

It remains to add that it will be possible to buy Ryzen 5000 from November 5.