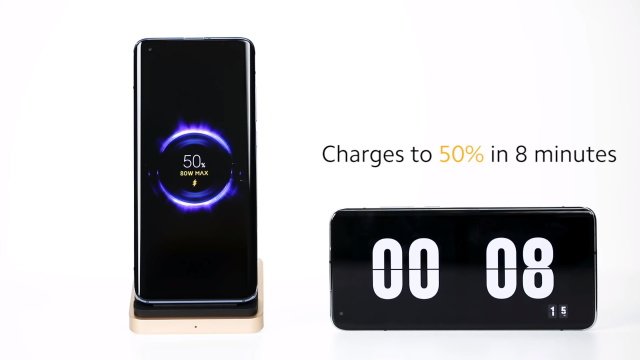 The 15W wireless Magsafe charging in the new iPhone 12 is certainly good, but Xiaomi would not be itself if it had not demonstrated its achievements in this area. The Chinese company has published a video in which a smartphone with a 4000 mAh battery is charged using an 80W wireless docking station. And it only takes 19 minutes to fully charge from 0 to 100%.

Just a minute of charging is enough to replenish 10% of the charge, the smartphone becomes half charged in 8 minutes, and it reaches a full charge after another 11 minutes. Many high-speed wired chargers do not achieve such indicators, let alone wireless ones.

Today, Xiaomi’s 50W Wireless Charger is available for sale, which can fully charge the 4500 mAh battery in the Mi 10 Ultra in 40 minutes. Oppo recently showed 65W AirVOOC wireless charging, but it’s not available for purchase just yet. Therefore, Xiaomi may be the first to raise the bar to an even higher level, however, the company does not specify when exactly 80W charging will go into production.

YOU CAN ALSO READ:  Google decided to extend Chrome support on Windows 7 for another six months - until January 15, 2022